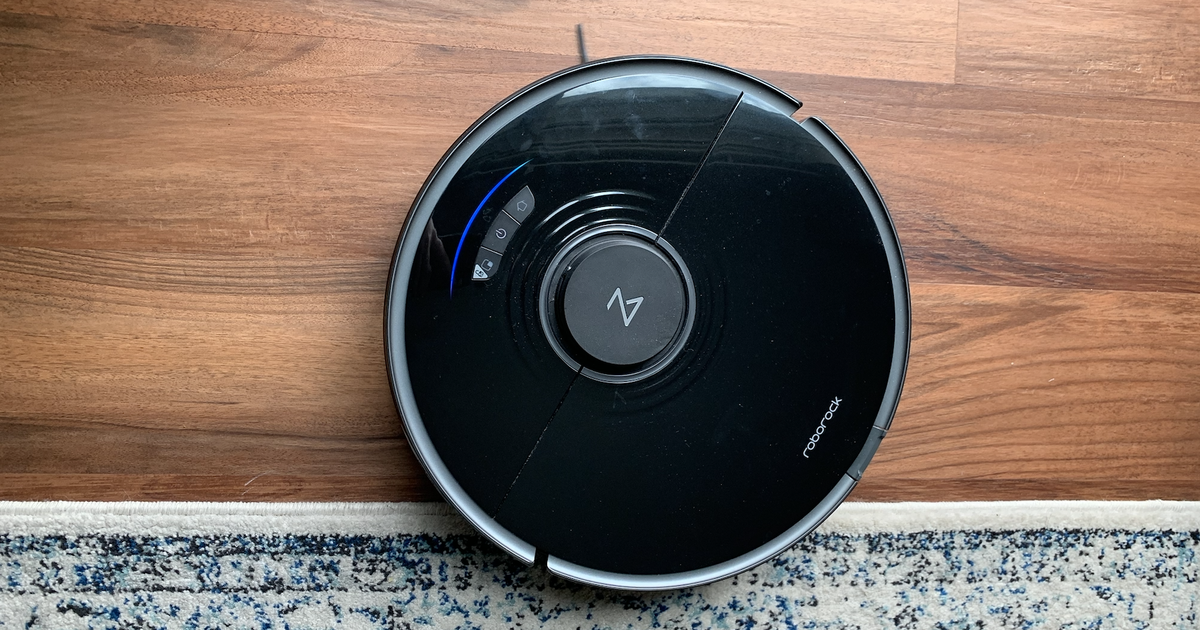 I’ll be honest, I didn’t have a lot of faith in robot mops. A carpet and a tank of water — unattended — seems like a recipe for disaster for a machine that’s just guessing on floor type. And doesn’t babysitting defeat the purpose of a robotic cleaner in the first place?

But Roborock’s latest stab at automated dry and wet cleaning, the Roborock S7, can be trusted to do both jobs without getting itself into trouble.

Design and setup: Sleek and simple

At first glance, the S7 looks as expensive as it is. The design (a shiny black or white surface with silver trim and a knob on top) doesn’t deviate much from past models, but the minimalism is classier than most Roombas.

Finding empty floor space for the dock, downloading the app, and connecting to WiFi are the extent of setup. The app will grab your WiFi password and then ask you to connect your phone to a WiFi name specifically for the vacuum. WiFi connection is needed to control the vacuum remotely, schedule cleanings, use voice controls, or send the vac to specific zones. The map of your home, which the S7 draws itself, will get more precise over time as the S7 fumbles around the rooms.

A fun little tune plays when the S7 is ready to clean. An automated voice also announces when the vac is beginning its rounds, finished and returning home, or charging. Voiced charging confirmation is helpful when picking up the vacuum and trying to dock it yourself (say, if the WiFi is out), as well as voice alerts letting you know when the dust or water bins are inserted properly.

My apartment was essentially a Mario Kart track for much of this review (think Donut Plains 3 or the forest bit of Mount Wario.) I was in the process of moving so cardboard boxes and other scattered items were making the lap around the kitchen significantly trickier. And, as with any home, I have pieces of furniture that stick out at different lengths. This was all squeezed into a tiny Brooklyn apartment where room to get your bearings is already scarce.

Yet the S7 wasn’t fazed.

Rather than giving up on an awkward spot completely, it reversed and came at the blocked area at a slightly different angle. It scooted itself tightly around the boxes, under cabinets and the dishwasher, and went as far as to squeeze itself between the legs of a rolling desk chair. The leading omnidirectional wheel steers gently, avoiding the bumper cars stereotype that many robot vacuums get strapped with.

I was impressed with the S7’s ability to hoist itself over doormats or changes in floor type. With confidence, it rolled over my bath mats, thin area rugs, and barriers between the living room hardwood and bathroom tile.

Robovac’s new VibraRise feature can be thanked for this, as well as NO WET RUGS, BABY. Instead of dragging the wet pad wherever it goes, the S7 holds the mop off the ground when it senses fabric floors that shouldn’t be mopped. This feature essentially worked without fail. The animated light on the top even changes from blue (mopping) to white (regular vacuuming).

You don’t have to fully rely on the S7’s ability to sense which floors are which. It uses LIDAR to create a map of every room, which can be labeled and follow specific cleaning settings (like Quiet Mode or Deep Mopping). Creating an accurate map took a few bouts of letting the S7 roam free — maybe this was just because my apartment was so tiny that its setup felt like one giant room. At any rate, its navigation directly to a zone I had chosen was clutch.

Coming from a Dyson stan, the S7’s cleaning is pretty thorough

I threw a lot at the S7: Dust bunnies under furniture that hadn’t been moved in a year, panko crumbs, and my long-ass hair. On both hard floors and carpet, the S7 did a great job. Corners that couldn’t fully be reached with the circle-shaped body were mostly taken care of with its rubber brushes. The floating rubber brush, also a new addition since the S6, is said to hover closer to surfaces to pick up smaller particles. The rubber is supposed to combat hair tangling too, though I’ve flipped the S7 over to find a nasty knot of hair wrapped around the bristle rather than sucked into the bin. However, the wrapping didn’t seem to alter the brush’s ability to spin.

Once the S7 gets oriented and does some drunk edge cleaning, it begins to clean in rows, leaving behind satisfying zig-zags that prove it covered the whole floor. Even from another room, I could hear when HyperForce suction was activated to take a carpet to task. (The S7’s max 2,500 Pa suction is one of the highest on the market, rivaling the Roomba S9+.) The loudest buzz was obnoxious but tolerable, and the immediate floor detection was a really convenient touch.

I also found its suction level to be an indicator of how full the dust bin was. When it stops swiping large pieces of debris, don’t get pissed — there’s probably no room. With a dust bin about the width of a Nintendo Switch screen (and not much deeper), it fills quickly. However, emptying is as easy as clicking a few eject buttons and dumping.

Some robot mops take a cleaning solution in the water tank. Roborock advises against this to avoid bubbles in the motor. Something about scrubbing without a soapy mixture to dissolve dirt or disinfect felt yucky to me, but the automated water mopping came in handy on Swiffer off days.

The S7’s sonic scrubbing is pretty tough for a robot that’s not putting arm muscle into it. Light shoe prints were gone in the first pass, while spilled cranberry juice took two. The mop pad is easy to slide off and lightly clean off, which I preferred to do so that said cranberry juice wasn’t being dragged around the rest of my apartment.

The path left behind is wet and shiny enough to let you know that it actually did something, but not soaked to the point where socks will get wet. If you see the trail start to get skinnier over time, it’s time to refill the water.

Downsides: The S7’s pristine maneuvering has a few roadblocks

The S7 will take its persistency to its grave. A cracked bedroom door or a cheap full-length mirror leaning against the wall wasn’t a strong enough barrier to not potentially be pushed around.

And the S7 getting into a room it shouldn’t be in could cause a serious holdup. If you have rooms with high-pile rugs or cords on the ground, you’ll want to move them or be sure to take advantage of the zone feature. My S7 wouldn’t suck anything when its bin was full until it came across a phone charger — and suddenly, it was starving. It fiddled around with that and my beloved fluffy white rug, and even got tripped up on thicker cords like extension cords. They’re easy to pull out of the bottom once cleaning is paused, but this could waste hours of cleaning time if you aren’t there to fix it. The instruction manual did say to clear the floor of any cables or wires, and expecting any robot vac to be invincible seems ridiculous. Legos were safe, though.

Debris pushed far under low-profile furniture won’t be touched by the S7. It’s just over four inches tall, compared to small space vacuums that typically measure less than three inches. Being bulky is an expected disadvantage for a machine that’s housing a whole mop, but noteworthy for homes with beds or couches that don’t have tall legs.

Is the Roborock S7 worth it?

You mean past always having a reason to say “Robo-rock” like Daft Punk says “robot rock?”

The Roborock S7 is a solid choice for anyone who wants autonomous wet and dry cleaning. Once cords and high-pile rugs are off-limits, setting it loose without supervision shouldn’t have you stressing about where it’s getting stuck or what carpets are accidentally being soaked. Its two- to three-hour battery life runs laps around competing vacs.

At $649.99, it’s more expensive than a few Roombas that empty their own dustbins — but those Roombas don’t mop. There could definitely be a point where one treasures coming home to a clean, mopped floor enough to pay this kind of price. Roborock is slated to release an auto-empty dock for the S7 later in 2021.

There’s a certain brand of high that comes with operating a powerful manual vacuum. Anyone who classifies sweeping as cathartic knows what I mean. The Roborock S7 can’t replace that control, but if you need a robot vacuum that you can trust to do *almost* as good of a job as you, the S7 is a satisfying contender. If your robot vacuum search is fueled by a hatred of expending elbow grease, you’ll need a robot vacuum that won’t require your assistance every few minutes. The Roborock S7 is that, too.