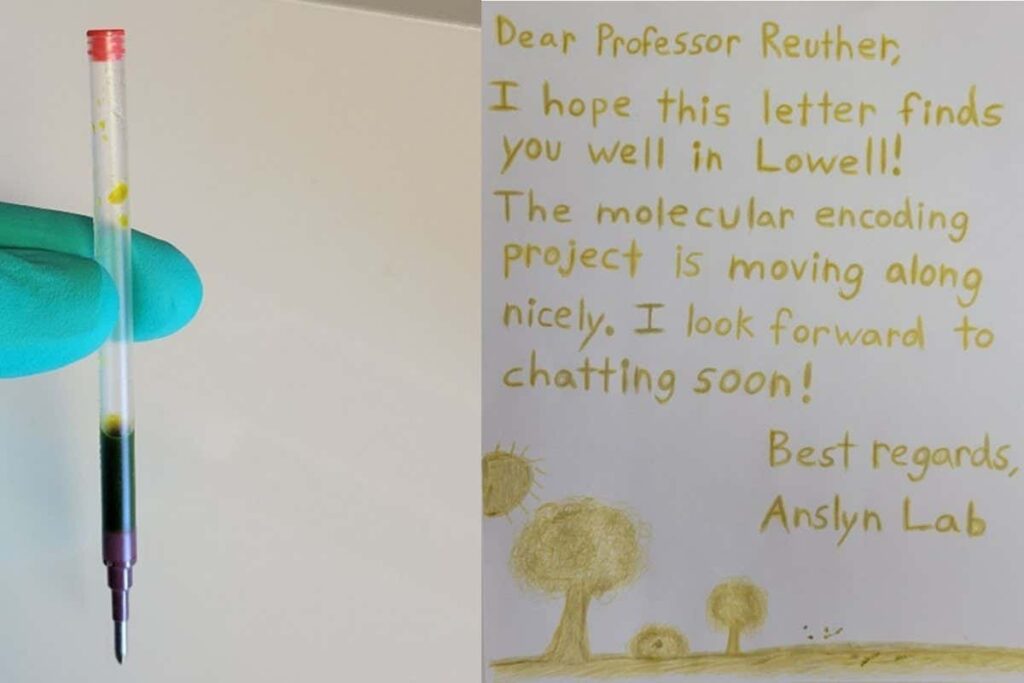 Ink laced with molecules that can store data has been used to write a letter containing a hidden, encoded message – the encryption key to unlock a text file of the novel The Wonderful Wizard of Oz

Ink containing polymers that can store data has been used to write a letter containing a hidden message – the encryption key to unlock a text file of L. Frank Baum’s The Wonderful Wizard of Oz.

Eric Anslyn at the University of Texas at Austin and his colleagues have developed a technique that involves steganography – the practice of hiding one message inside another.

The team generated a 256-character cipher key to encrypt and decrypt files using the Advanced Encryption Standard (AES), a common cryptography method. The group then encoded the cipher key into eight oligourethanes, a type of polymer.

“Because they’re a polymer with a very specific sequence, the units along that sequence can carry a sequence of information, just like any sentence carries information in the sequence of letters,” says Anslyn.

Each polymer was made up of 10 smaller compounds called monomers. The middle eight monomers hold the details of the key, with one monomer on each side acting as the key’s synthesiser and decoder.

The team mixed the polymers with isopropanol, glycerol and soot to make an ink. Using the ink, some of the researchers wrote a letter and then sent it to another person on the team. The group then extracted a sample of the ink and used the cipher key to unlock an encrypted file: the entire text of the novel The Wonderful Wizard of Oz by L. Frank Baum.

“The idea of writing a message but the real, hidden message is contained in the molecular structure of the ink is fascinating, although maybe not the most practical method,” says Alan Woodward at the University of Surrey, UK.

The headline and standfirst of this article have been corrected to clarify what was encoded.