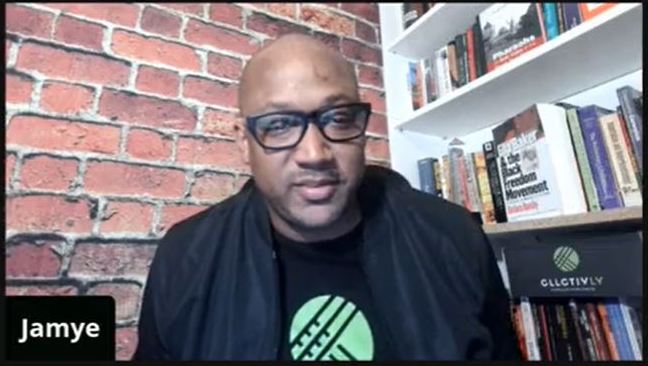 By Carl Thomas
Special to the AFRO

While many define wealth in regards to the assets they have, Jamye Wooten’s work allows for people to examine African American wealth with a philosophy of giving back, collecting money, and keeping money within the Black community.

Wooten has been a trusted advisor to many of the world’s most well-respected faith-based and nonprofit organizations, having organized and documented social movements throughout the United States, United Kingdom and parts of Africa. An entrepreneur at heart and by blood, he detailed how he was able to transition from the son of a business owner in inner city Baltimore to founding and operating three organizations geared toward social change (Kinetics, CLLCTIVLY, and The Black Theology Project).

“My dad grew up here in Baltimore, but had to drop out in 8th grade, because he was the oldest…but went on to open five dry cleaners and several night clubs in the city.  So that entrepreneurial piece was definitely always part of our family,” he said.  “I had the chance to be a part of an organization [the Collective Banking Group, now known as the Collective Empowerment Group] that was committed to pooling the assets and resources of the Black church.”

Wooten then launched Kinetics, an information ministry that integrates theological reflection and practice, while using dialogue as a catalyst for social change.

“I’ve gone around the globe, at the intersection of faith and movement building, working on education and working with social activist organizations.”

He started the Black Theology Project, a digital learning project and network that seeks to strengthen social movements by bridging the gap between the Academy, Church and Community.

In addition to his other work and ventures, CLLCTIVLY, “launched in 2019 to be a resource for those who seek to find, fund and partner with Black social change organizations in greater Baltimore,” and has been able to invest more than $150,000 in Black-led organizations since March 2020.

Wooten explained that while African Americans, the conversation turned to what could be perceived as a lack of monetary resources within the African American community, Wooten accepts those realities while countering with other types of resources from an asset vs deficit framework.

“We have a community that’s filled with Black genius, Black art, we have talent and intellect. So we’ve begun really mobilizing the resources that we do have in our hand,” Wooten said.  “Black-led organizations only receive about two percent of the $60 Billion in philanthropic dollars, but we also would like to build off the framework of Black folks have always mobilized resources.”

“I think we are our best asset,” Wooten emphasized.

Beyond those contributions, which some may consider extraneous, Wooten reminded audiences that historically, the African American community has continuously created ways to intentionally generate and pool monetary resources.

“From the faith standpoint, there is a long tradition of pooling the resources together, so even as we sometimes critique the Black church, I don’t know of any other institution that has stood the test of time and that still today is mobilizing resources, feeding the community, building housing projects. I’m on the board of the Black Church Food Security Network, with Herbert Brown, launched in 2015 in response to the murder of Freddie Gray and has taken off throughout the country using the Black Church as an asset,” he explained.

Wooten also discussed the importance of not only supporting the Black community, but also in building mechanisms by which others can support as well.

“We launched the Giving Circle as a pilot, still recruiting members, but we have over 60 members and about $25,000 raised, so we are just starting our learning journey with a diverse group,” he said.  “All of our models, from the giving circle to the microgrants to the solidarity fund are rooted in the same principles. This is solidarity, not charity.”

To find out more about Wooten or any of the programs mentioned above visit www.cllctivly.org.