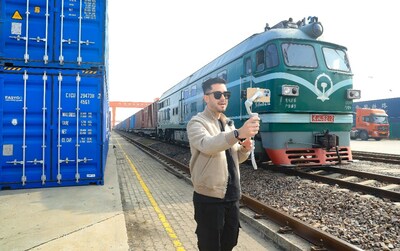 On the morning of Nov 16, a freight train loaded with home appliances made by Chinese companies departed from Wuxi of East China’s Jiangsu province to Moscow, Russia. Such China-Europe train trips have taken place at the Wuxi West Railway Station Logistics Park twice a month since August.

The products on board included washing machines and dryers produced by Wuxi’s well-known local foreign trade company LittleSwan. The company exports about 10 million such machines annually, with 80 percent shipped to Russia, according to Zhu Ping, deputy director of the administrative committee of the logistics park.

In the past, about 90 percent of local foreign trade businesses in Wuxi relied on sea and road transportation to export goods.

“The operation of the China-Europe freight train allows local businesses to dispatch cargoes right on their doorstep, relieving the pressure on export,” Zhu said.

In the past two years, foreign trade businesses have been confronted with difficulties in exporting goods due to a short supply of sea transport and high shipping charges. But now the China-Europe freight train has provided local businesses with a timely option.

Zhu said, in comparison with traditional transport modes, the freight train takes about 25 days from Wuxi to reach Moscow or Hamburg, which is half the time required by container ship and costs half of flying by plane.

The China-Europe freight train project was launched in Wuxi early this year, with the first train trip officially departing in August. So far, the trains have completed 15 trips; three to Central Asia, 11 to Germany and Russia and one to Poland. They have transported11,560 metric tons of cargo in 1,156 containers, valued at 320 million yuan (€43.25 million), according to the park.

As one of the major cities in the Yangtze River Delta, an economic powerhouse area of China, Wuxi is an export-oriented economy. Data from the city’s commerce bureau showed that from January to October, Wuxi’s foreign trade reached 613.43 billion yuan, up 11 percent year-on-year, accounting for 13.5 percent of Jiangsu’s total.

Currently, Wuxi is home to more than 1,000 manufacturing businesses, with more than half engaged in producing steel, auto parts and textiles. Of them, many businesses export goods to destinations in Europe and Central Asia.

As a remarkable achievement under the Belt and Road Initiative, the China-Europe freight trains are playing a role in China’s high-level opening-up and serve the dual circulation development pattern.

A report on the development of the China-Europe freight trains in 2021 showed that since 2016, the annual number of freight train trips had grown 55 percent on average. Meanwhile, the value of cargo transported in this way increased nine times and its proportion in China-EU trade increased from 1.5 percent to 8 percent.

Taking the lead in expanding opening-up, Jiangsu has accelerated construction in the railway sector to bolster connectivity under the BRI.