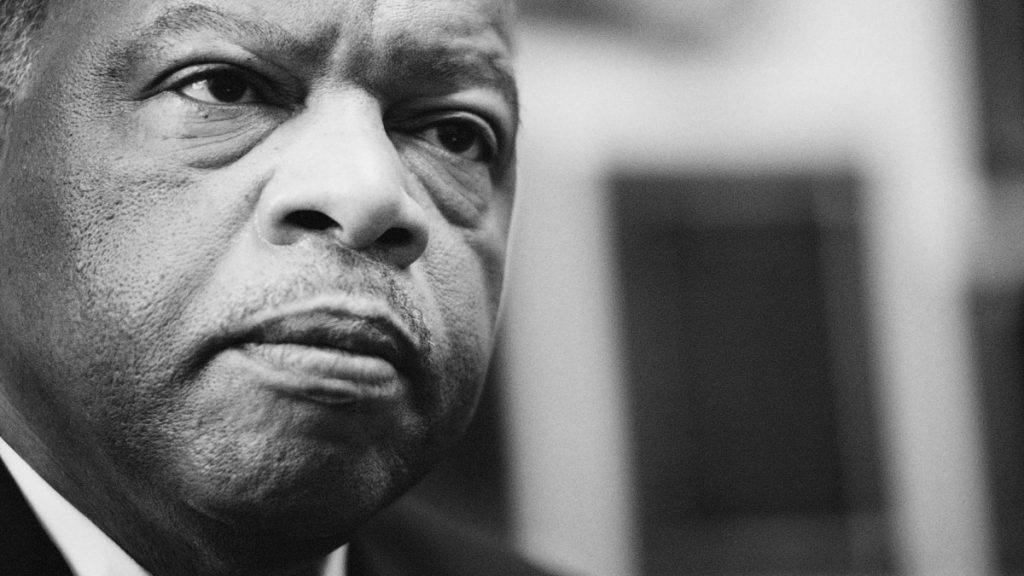 Congressman John Lewis, legend of the Civil Rights movement, a leader of the 1963 March on Washington, and an icon for grassroots organizers for more than five decades, died on July 17, 2020, in the midst of another widespread uprising for racial justice in the U.S.

He had remained a towering figure in American politics long after the sit-ins, protests, and freedom rides of the 1950s and 1960s; long after he almost died crossing the Edmund Pettus bridge in Selma, Alabama, on what came to be known as Bloody Sunday. As a Democratic congressman representing Georgia, Lewis sponsored bills supporting gender and LGBTQ equality, was a proponent of immigration and gun reform, and never stopped engaging in civil protest for each of those causes.

“Speak up, speak out, get in the way. Get in good trouble, necessary trouble, and help redeem the soul of America.”

In 2020, as the country grappled with a global pandemic and a renewed social justice movement that had its roots in Lewis’s own actions, his legacy took on renewed meaning, from his notion of a “beloved community” for which he vowed to keep fighting, to his call for us to get out of our homes and participate in productive protest. That was the “good trouble” he often spoke of, as he did in Selma last spring on the 55th anniversary of Bloody Sunday.

“Speak up, speak out, get in the way,” Lewis urged the crowd from that notorious bridge, a few months before his death. “Get in good trouble, necessary trouble, and help redeem the soul of America.”

When he died, the country mourned a great political leader and activist; someone who’d put his life on the line for justice. Those ideas of empathy, active protest, and courageous sacrifice will echo in our nation’s consciousness forever.

His actions spoke much louder that his words, of course, and what he had to say to activists, leaders, and the country as a whole can’t be reduced to sound bites.

On the first anniversary of his death, however, consider a few seminal ideas from the mind of a civil rights legend, and let them inspire your own contributions going forward to this nation’s long march toward justice for all.

“That is what we believed in, what we were all about — a mass movement, an irresistible movement of the masses. Not a handful of lawyers in a closed courtroom, but hundreds, thousands of everyday people—disciplined, peaceful people — taking their cause and their belief to the streets.”

— From Walking With the Wind: A Memoir of a Movement.

Lewis recounted a conversation with Supreme Court Justice Thurgood Marshall during a panel at a conference for race relations in 1961. The two leaders had differing opinions on civil protest, Lewis wrote, one that prioritized government-level action and another that saw more value in “taking the cause to the streets.”

“My dear friends, your vote is precious, almost sacred. It is the most powerful nonviolent tool we have to create a more perfect union.”

— From Lewis’ Address to the Democratic National Convention, Sept. 6, 2012.

Lewis, who was at the time chairman of the Student Nonviolent Coordinating Committee (SNCC), addressed the Kennedy administration directly in his speech, demanding civil rights action. Early versions of Lewis’ speech have him speaking explicitly about white supremacy at the highest levels of the federal government and calling for activists to “burn Jim Crow to the ground.”

“I was not concerned about my body. No one was going to kill my soul.”

— From Walking With the Wind: A Memoir of a Movement.

Here, Lewis reflects on the many times he risked his life as a young man, specifically recalling a demonstration in front of the Loew’s Theatre in Nashville in 1961. He was arrested at the gathering and spent his twenty-first birthday in jail. 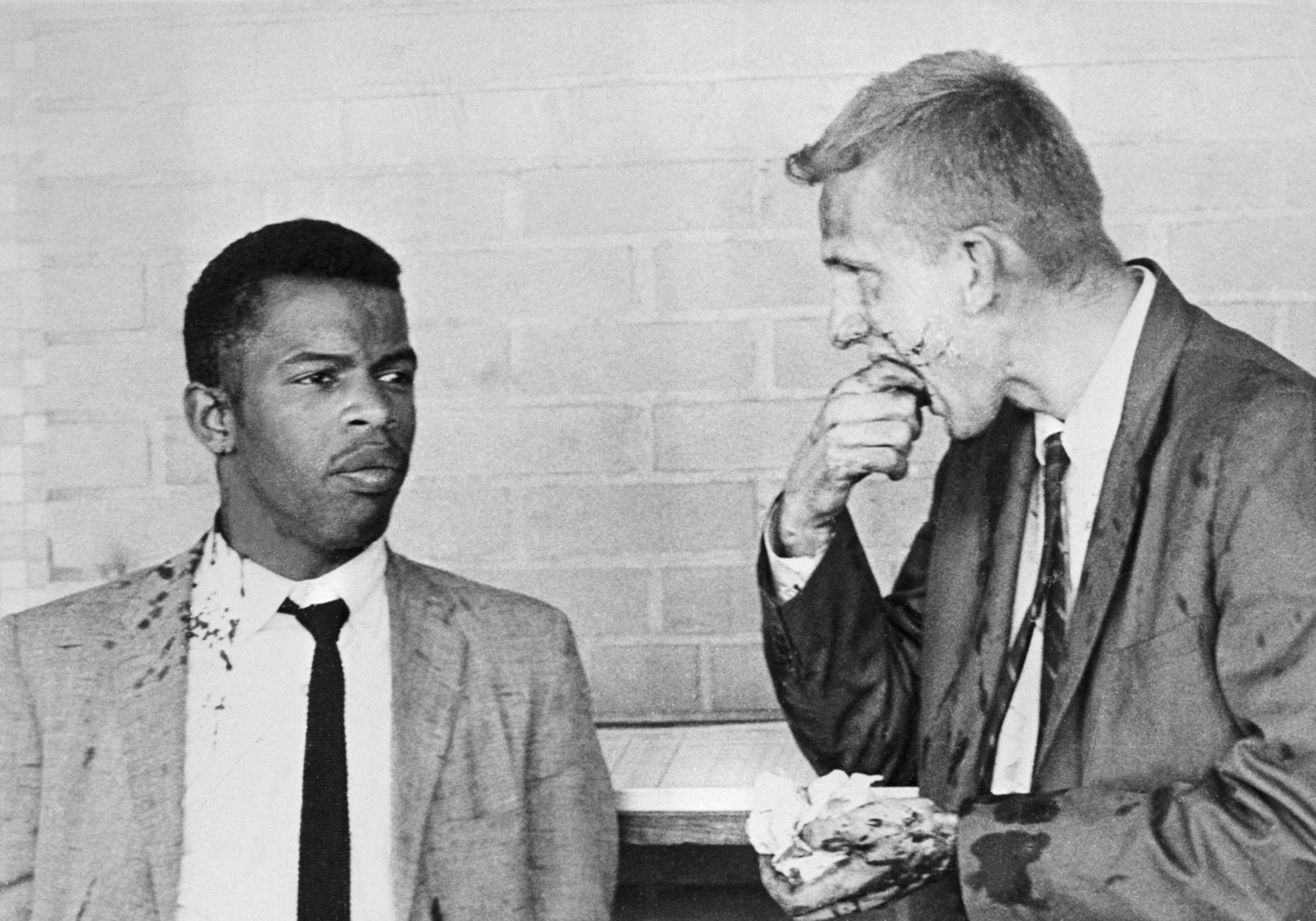 “When historians pick up their pens to write the story of the 21st century, let them say that it was your generation who laid down the heavy burdens of hate at last and that peace finally triumphed over violence, aggression, and war.“

— From the posthumous New York Times opinion piece “Together, You Can Redeem the Soul of Our Nation,” published on July 30, 2020. 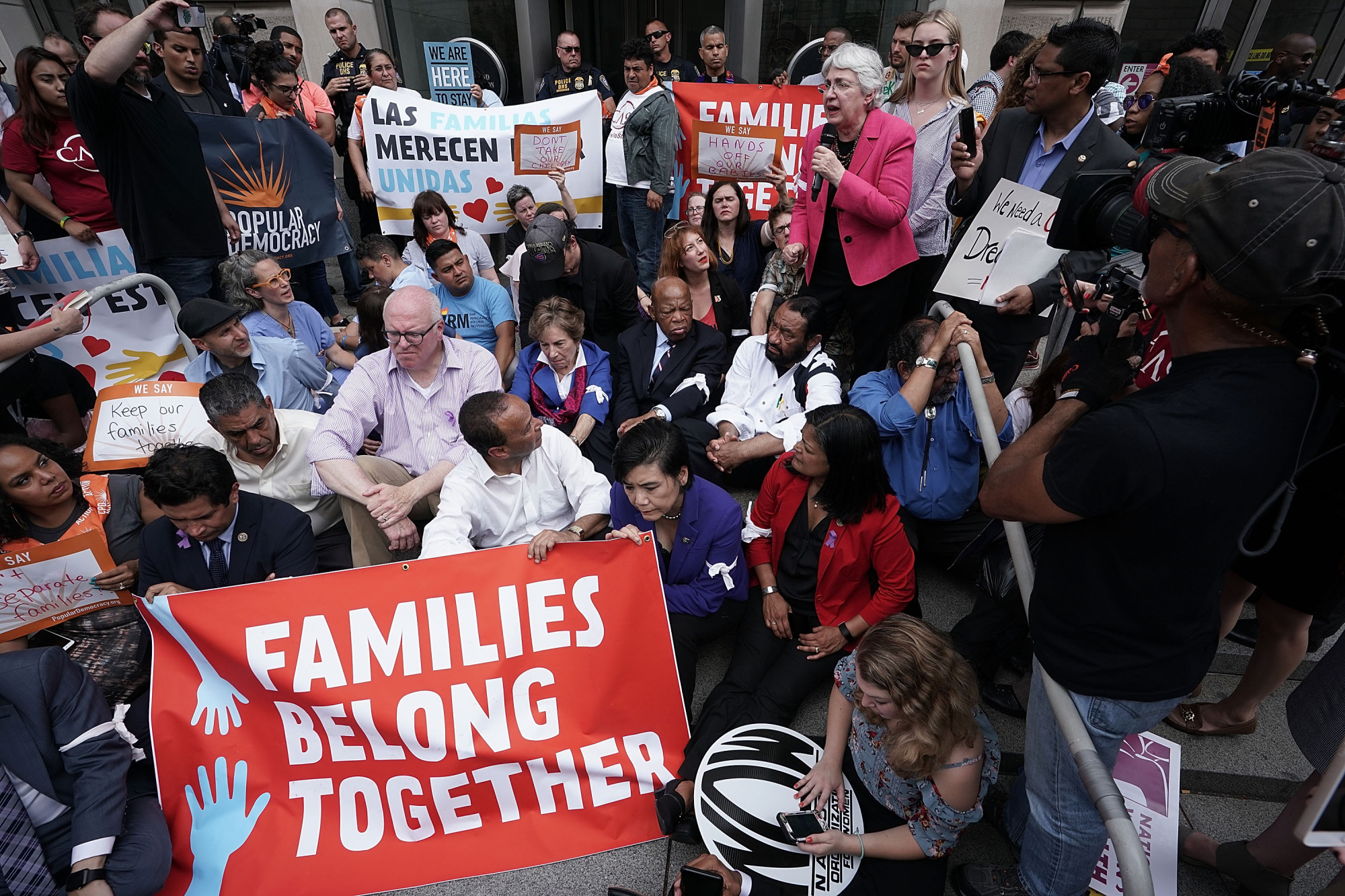 Lewis attends a protest in front of the  headquarters of U.S. Customs and Border Protection on June 13, 2018.
Credit: ALEX WONG/ Getty Images

“So I say to you: Don’t give up. Don’t give up on the things that have great meaning to you. Don’t get lost in a sea of despair. Stand up for what you believe in. Because…we are one people, one family, the human family. We all live in one house, the American house, the world house. We are Black. We are white. Hispanic, Asian American, Native American. We are one people.”

“This bill is a slap in the face of the Declaration of Independence. It denies gay men and women the right to liberty and the pursuit of happiness. Marriage is a basic human right. Why don’t you want your fellow men and women, your fellow Americans, to be happy…? We are talking about human beings — people like you. People who want to get married, buy a house, spend their lives with the one they love. They have done no wrong.”

— Speaking to Congress about the Defense of Marriage Act (DOMA) in 1996.

Lewis had a long history as an advocate for LGBTQ rights — he co-sponsored more than a dozen bills for LGBTQ protections, including earlier versions of the Equality Act, a landmark piece of LGBTQ legislation that’s was reintroduced and passed by the House in early 2021. Lewis also led a congressional sit-in after the deadly shooting at the Pulse night club in Orlando, Fla., in 2016. A protester holds up a sign reading  “Get In Good Trouble” during a march for Black Womxn in Times Square after the murder of George Floyd.
Credit: Corbis via Getty Images

“When you see something that is not right, you must say something. You must do something. Democracy is not a state. It is an act, and each generation must do its part to help build what we called the Beloved Community, a nation and world society at peace with itself.”

— From the posthumous New York Times opinion piece “Together, You Can Redeem the Soul of Our Nation,” published on July 30, 2020.