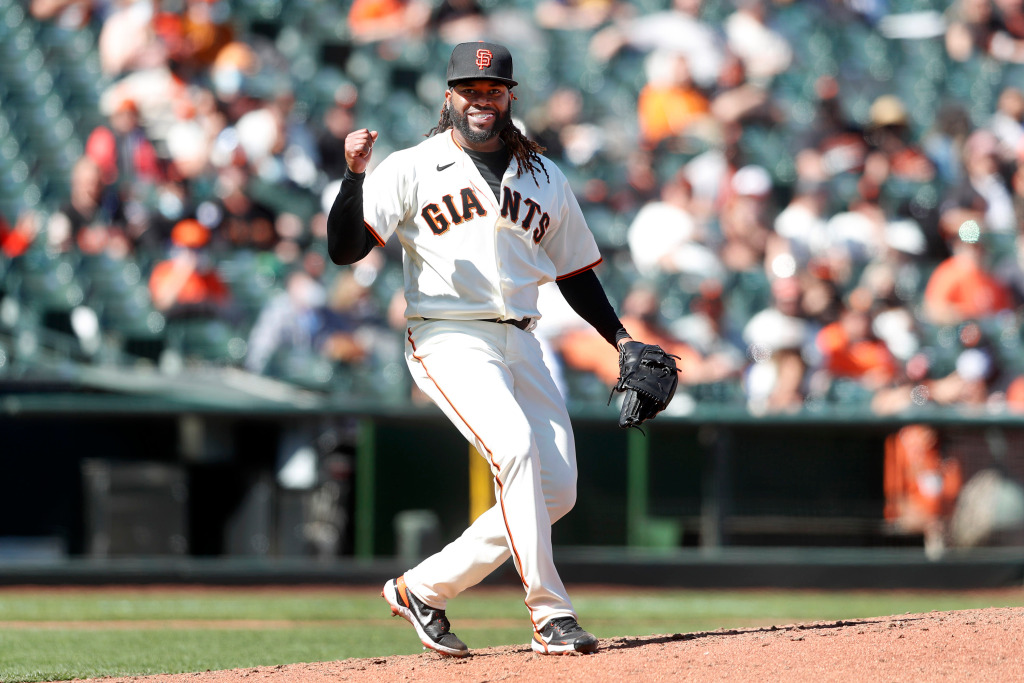 SAN FRANCISCO — After spending the last decade in a Giants uniform, Brandon Crawford knows the 2021 season could be his last with his hometown team.

The best shortstop in franchise history is committed to savoring every moment as he plays out the final year of his contract, and in the club’s home opener on Friday, Crawford gave himself, starter Johnny Cueto and all of the 7,390 fans in attendance at Oracle Park a reason to celebrate.

After Cueto had opened the game with seven shutout innings, Crawford broke a 0-0 tie by planting a two-run double in the gap in  right-center that ultimately propelled the Giants to a 3-1 victory in over the Colorado Rockies.

“It was definitely special,” Crawford said. “Being out there with fans back at the crowd and being back at home, being able to get a big hit in a big situation, it was all pretty special and it was a lot of fun.”

Crawford’s double earned a roar from the first fans to gather inside the stadium since September 2019, but it was Cueto who set the tone on Friday with a masterful performance that was reminiscent of his earliest days in a Giants uniform. The veteran starter tossed 8 2/3 innings of one-run ball, allowing four hits while racking up seven strikeouts before a Trevor Story single sent Gabe Kapler to the mound to bring in closer Jake McGee for the game’s final out.

Cueto, who prides himself on his ability to entertain a crowd, dazzled by mixing speeds and commanding the corners of the plate with each of his pitches in a way the Giants hadn’t seen since before he underwent Tommy John surgery in August 2018.

“I feed off the crowd and I like to pitch in front of the crowd,” Cueto said through Spanish language interpreter Erwin Higueros.

The right-hander retired the first 13 Rockies hitters he faced before issuing a fifth-inning walk to first baseman C.J. Cron and allowing a single through the left side of the infield to left fielder Raimel Tapia. Colorado’s first run-scoring opportunity was immediately thwarted, however, as Cueto induced a 5-4-3 double play and punctuated the inning-ending groundout with a fist pump.

“Whether it was mixing up pitches and locating it seemed like every one of his pitches today, he did a really good job of keeping them off balance and they didn’t barrel a whole lot all day,” Crawford said.

Cueto’s no-hit bid may have disappeared, but his effectiveness didn’t dwindle at all as he pitched around a leadoff single in the sixth and wrapped up his seventh inning of work with a pair of strikeouts.

The first came on an 0-2 changeup to Charlie Blackmon that appeared to dip just below the strike zone, but the movement was late enough to fool home plate umpire Ben May, who ended up ejecting Blackmon for arguing the call. The second came after Cueto shimmied, hesitated, shimmied again and finally delivered another two-strike changeup that fooled Cron for the starter’s sixth strikeout of the afternoon.

“I was just able to be on top of the hitters and be aggressive in the strike zone,” Cueto said in a rather matter-of-fact manner.

Cueto generated 12 whiffs on 118 pitches Friday, but when the Rockies did put the ball in play, he often helped his own cause. The 14th-year veteran fielded a bunt in the first inning, covered first base on a 4-1 putout to start the second, snagged a lineout in the third and gloved a comebacker in the eighth.

“He did a great job defensively from every angle, covering first base, being in the right spots to back up, making plays himself and even having competitive at-bats,” Kapler said. “He was competing the entire game and it shows what a great all-around athlete Johnny is.”

After Crawford gave Cueto a cushion by breaking the tie in the seventh, the Giants added on in the eighth inning when Alex Dickerson blooped a RBI single into right field on the seventh pitch of an at-bat against right-hander Robert Stephenson.

The triple shimmy in all it’s glory. pic.twitter.com/pSSbBpnqtl

The joy and energy the Giants provided the crowd in the late innings on Friday were a reminder to all that was missed last year, and all that’s transpired in the time players spent separated from their home fans.

The last time the Giants played in front of fans at Oracle Park, former manager Bruce Bochy gave a 15-minute farewell speech following the final game of a 13-year tenure. In the 18 months since Bochy’s emotional goodbye, the Giants had revamped the coaching staff, overhauled much of the roster and played a 60-game season in front of empty ballparks around the country in the midst of a pandemic.

A Giants lineup that turned Oracle Park into a launching pad last season was eager to return home after scoring just seven runs in the final four games of the team’s opening trip. Following two decades of offensive struggles at China Basin, the Giants posted the fourth-highest OPS of any team at home during the 2020 season with an .841 mark and hit 51 home runs at home, the fifth-most of any club.

Despite the change in scenery, the Giants’ recent struggles at the plate continued against Colorado left-hander Austin Gomber, who allowed just one hit in 6 1/3 innings of work. The Rockies acquired Gomber this offseason in the trade that sent star third baseman Nolan Arenado to the St. Louis Cardinals, so it may not have been a surprise to San Francisco fans to see the player who replaced one of the biggest Giants killers in recent years pick up where Arenado left off.

Fortunately for San Francisco, when Gomber came out, right-hander Tyler Kinely came in, giving Crawford the type of favorable matchup the club needed to break through for a win.

“For me it was especially gratifying to see Craw deliver,” Kapler said. “And then also just for Craw to be standing out there after that big hit, what ultimately turned out to be the game-winning hit, I’m sure there was a ton of pride. I’m really happy for Giants fans, both in the ballpark and at home, that they got to see Brandon do what he did.”