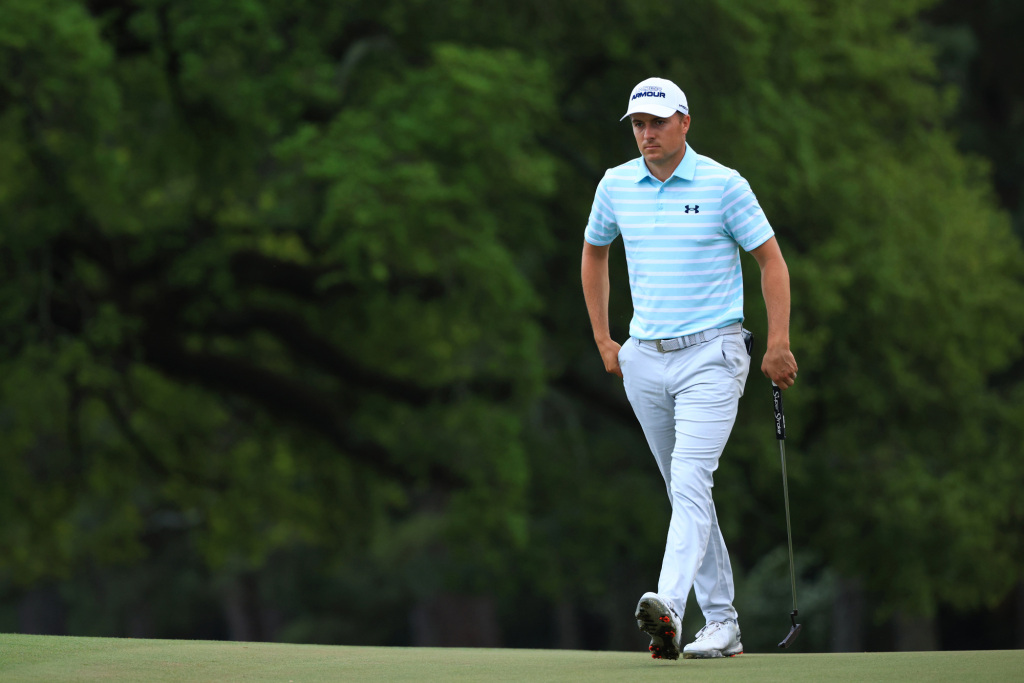 All week he had been playing defense, like a desperate goaltender kick-saving his way home.

On Thursday Jordan Spieth found himself behind the 15th green. He gunned a chip that was surely headed across that green and down the shaved bank and into the guarding pond, if not into the Savannah River itself.

The ball slammed into the pin and rattled into the cup. Double bogey, or worse, became eagle, and Spieth just set his cap on a goofy angle and smirked in the direction of caddie Michael Geller.

On Saturday Spieth was stuck in the pine straw after two shots on the par-5 eighth. Another grove of trees barred him from seeing the green. But he gouged out a recovery that trickled to within four feet of the cup, an escape and a birdie that would have earned a bow from Seve Ballesteros himself.

Two holes later he left his approach on the 10th hole short of the green, another knife’s-edge situation. He solved it by chipping his ball up and in, for birdie.

At that point, Gershwin had officially taken over the Masters. Someone had found a little lamb lost in the woods, and someone was watching over Spieth.

Greg Norman and Rory McIlroy won’t believe this but the Masters loves redemption. In  2015 Spieth equaled the Masters scoring record of 18-under-par. He finished second the year before and the year after, suffering a quadruple-bogey at No. 12 in 2016 that opened the door for Danny Willett.. Two years later Spieth was nine strokes back and conjured up a 64 that almost caught Patrick Reed.

He spent most of his next two years in more forests than Ranger Rick, and going into Phoenix in February he was ranked 92nd in the world. Suddenly he began contending again, and last week he won in San Antonio, and he parachuted into Augusta as the second favorite, behind Dustin Johnson. Once he got there, his good shots were being rewarded. So were his bad ones.

But at the end of Saturday, Spieth missed a birdie putt on 18 and walked in, defenseless at last, and six strokes out of the lead. A win is within his power, but not his control.

Instead, the tournament lands in the strong, 29-year-old hands of Hideki Matsuyama, who can become the first Japanese player to win any major and follow Tsubasa Kajitani’s victory in last week’s Augusta National Women’s Amateur.

Matsuyama was sitting there, within range of leader Justin Rose, when a storm blew through Augusta and halted play for an hour. He went to the parking lot and played video games on his phone. When he returned, he made it Game Over for most of the field.

He tore through the final eight holes at six-under-par and shot 65, which puts him four strokes ahead of Rose, Will Zalatoris, Xander Schauffele and Marc Leishman.

The rain returned, but only Matsuyama was nimble enough to figure out the new footing. Schauffele, playing with Matsuyama, rolled in a 60-foot eagle on No. 15 and brought out some of the Japanese he’d learned from his grandparents.

“He told me some jokes,” Matsuyama said. “We had a good time.”

“I just threw my few words out there,” Schauffele said. “Some bad words, unfortunately. He’s an incredible iron player. You can see why he’s had the record he’s had here.”

Matsuyama twice won the Asian Pacific Amateur to earn Masters tickets. At 19, he shot 68 in the third round.

“Steve Stricker was coming off the ninth green and saw me and said, ‘Nice playing,’’’ Matsuyama said, through interpreter Bob Turner. “That’s a memory I will cherish. That day gave me the confidence I could play golf as a career.”

Matsuyama is 22-under-par in 37 Masters rounds and has finished in the top 20 in five of his past appearances. But he has receded to 25th in the world, after getting to No. 2 in 2017. He has five PGA Tour wins and 15 worldwide.

He has found comfort in his new coach, Hidenori Mezawa, and he admitted that it was “less stressful” because most of the usual battalion of Japanese reporters has been kept at home by COVID-19.

Plenty of stress awaits Matsuyama Sunday. So does the toughest judge in golf, at least for defendants.