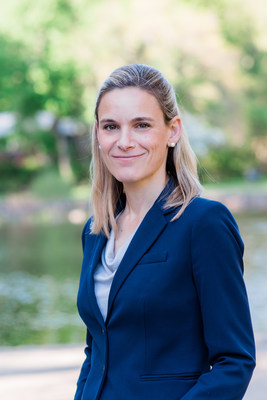 BOSTON, May 5, 2022 /PRNewswire/ — RWE Renewables is proud to announce Katie Theoharides is joining the U.S. offshore wind team as of June 1, in the new role as Head of Offshore Development (East).

Katie comes to RWE from her position as Secretary of Energy and Environmental Affairs for the Commonwealth of Massachusetts. A cabinet secretary to Governor Charlie Baker, she was responsible for more than 3,000 staff, a budget of $300 million and six energy and environmental agencies – one of the largest and most diverse portfolios in the country.

While Secretary, Katie pushed forward several major climate initiatives and infrastructure projects, including deployment of the nation’s first-large scale offshore wind farm and the development and selection of its second and third round of procurements that will bring 3,600 megawatts of clean, affordable power to the Massachusetts grid –- enough energy to power an estimated 608,000 homes. She also established an aggressive limit of net zero emissions by 2050 and oversaw more than $1 billion dollars in climate mitigation and adaptation investments.

“Katie has been a visionary for Massachusetts whilst driving the state’s clean energy ambitions and will further RWE’s Growing Green strategy to rapidly invest €50 billion euros in clean energy technologies,” said Sam Eaton, Executive Vice President Offshore Wind Development, RWE Renewables Americas. “We are excited to welcome Katie to our team and look forward to working with her to develop clean, affordable and domestic offshore wind energy for millions of American households.”

In her role as Head of Offshore Development (East), Katie will be responsible for overseeing all development activities along the East Coast. Her portfolio will include the development of RWE’s research array in Maine which is the first offshore floating wind project in the U.S. and development of the largest lease area in the New York Bight that will generate over 3 GW of capacity and power 1.1 million homes in collaboration with our partners at Diamond Offshore Wind and National Grid Ventures respectively.

With a background in ecosystem ecology and climate science Katie has held a variety of climate focused positions, including Undersecretary of Climate Change and Director of Climate and Global Warming Solutions for the Commonwealth of Massachusetts.

“I’m thrilled to be joining the RWE team to help accelerate the pace of offshore wind deployment in the U.S., and to create clean, renewable energy that will help us achieve our urgent climate goals,” said Katie Theoharides. “I look forward to work directly on project development to help achieve RWE’s significant environmental and climate goals which include leading the energy transition by expanding their clean energy generation capacity to 50GW by 2030.”

RWE is one of the world’s leading companies in offshore wind, active across the entire value chain, from project conception and development to construction as well as operation and maintenance.

The unparalleled expertise the company has earned over the last 20 years has resulted in 17 wind farms in operation.

For more information, go to americas.rwe.com.

RWE Renewables
RWE is leading the way to a green energy world. With an extensive investment and growth strategy, the company will expand its powerful, green generation capacity to 50 gigawatts internationally by 2030. RWE is investing €50 billion gross for this purpose in this decade. The portfolio is based on offshore and onshore wind, solar, hydrogen, batteries, biomass and gas. RWE Supply & Trading provides tailored energy solutions for large customers. RWE has locations in the attractive markets of Europe, North America and the Asia-Pacific region. The company is responsibly phasing out nuclear energy and coal. Government-mandated phaseout roadmaps have been defined for both of these energy sources. RWE employs around 19,000 people worldwide and has a clear target: to get to net zero by 2040. On its way there, the company has set itself ambitious targets for all activities that cause greenhouse gas emissions. The Science Based Targets initiative has confirmed that these emission reduction targets are in line with the Paris Agreement. Very much in the spirit of the company’s purpose: Our energy for a sustainable life.