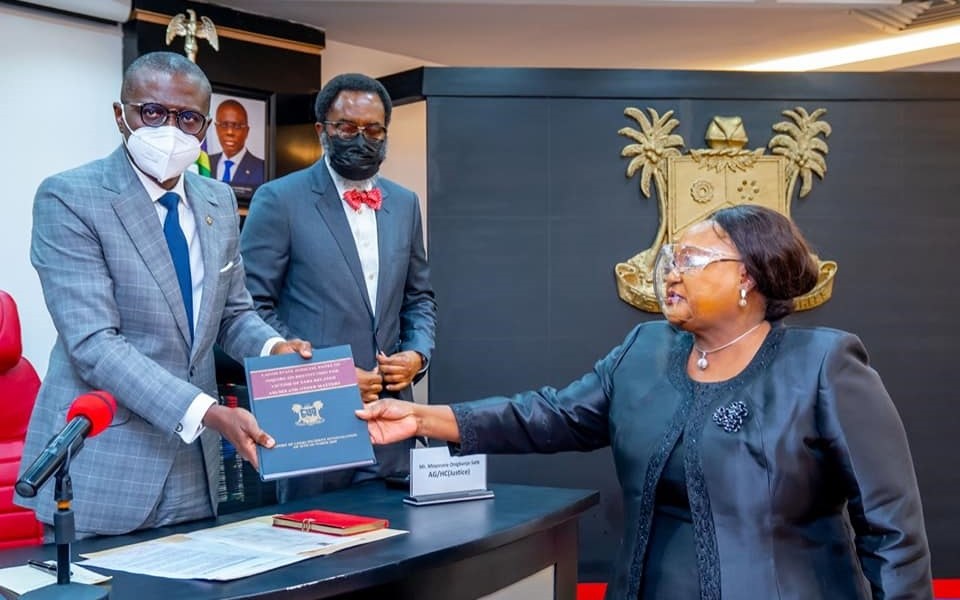 The Lagos State Judicial Panel of Inquiry on Restitution for victims of SARS related abuses and other matters awarded a total of N410 million to 70 victims of Police brutality.

The Committee received 235 petitions with only 14 of it being on the alleged Lekki Shooting incident.

Lagos State Governor, Mr. Babajide Sanwo-Olu, today set up a four-member committee led by Mr. Moyosore Onigbanjo (SAN), Lagos State Attorney-General and Commissioner for Justice, to raise a White Paper on the reports submitted by the Judicial Panel of Inquiry on Restitution for victims of SARS related abuses and other matters.

Governor Sanwo-Olu said the Committee would bring forward a White Paper within the next two weeks to be considered by the Lagos State Executive Council, pledging that the reports and recommendations will be made public and submitted to the National Economic Council (NEC) for discussion.

The Governor constituted the committee after receiving the two reports of the Lagos State Judicial Panel of Inquiry on Restitution for victims of SARS related abuses and other matters presented to him at the Lagos House, Ikeja by chairman of the panel, Justice Doris Okuwobi (retired).

The two reports submitted by the Panel to Lagos State Government are on investigation on petitions on several abuses and killings by the Nigerian Police, especially the disbanded Special Anti-Robbery Squad (SARS) and the October 20, 2020 Lekki Toll Gate shootings during the EndSARS protests hijacked by hoodlums.

Governor Sanwo-Olu also reassured Nigerians, especially residents of Lagos that the Government’s action would be guided by the law and in the public interest.

Still on the EndSARS, the Governor, expressed hope that Lagos State government’s decision on the reports would bring complete healing, reconciliation and restitution.

“I am going to constitute a four-member committee immediately, which will be headed by the Attorney-General, the Commissioner for Youths and Social Development, the Special Adviser on Works and Infrastructure and the Permanent Secretary, the Cabinet office.

“The four of them will immediately look through and bring forward a White Paper within the next two weeks that will be considered at the Lagos State Executive Council and would be gazetted as a white paper coming from the Panel of Inquiry.

“We will ensure that the recommendations that are coming out that will be turned into a white paper and would be made available to the public. We will do it appropriately so that history will judge us well and we will have a document that will stand the test of time. That is what the tribunal law says, so that it will be properly documented and gazetted in government’s records,” he said.

Governor Sanwo-Olu who pointed out that the panel had operated independently, commended members of the Justice Okuwobi-led panel for a job well done and also expressed appreciation to Lagosians for their cooperation during the exercise, which lasted for almost a year.

Speaking earlier, Justice Okuwobi expressed deep appreciation to the Lagos State Government and all the stakeholders who appeared before the Panel. She also thanked members of the Panel for their uncommon resolve to bring closure to the assignment and good team work.

She said part of the recommendations of the panel is establishment of a body to take over human rights abuses in Lagos.

Justice Okuwobi, who disclosed that the panel awarded a total of N410 million to 70 victims of Police brutality, said 235 petitions were received with only 14 of it being on the alleged Lekki Shooting incident.

“As much as the panel desired to have taken all petitions, the ones that were not taken by the panel were those that did not comply to our rules, so in this report, we made recommendations for a body to take over human rights abuse cases in Lagos State,” she said.

It would be recalled Governor Babajide Sanwo-Olu on October 19, 2020 inaugurated the EndSARS panel otherwise referred to as  the Judicial Panel of Inquiry to investigate alleged cases of brutality and human rights violations perpetrated by the Police and operatives of the dissolved Special Anti-Robbery Squad (SARS).

The panel was also saddled with the investigation of the alleged shootings that took place on October 20, 2020, at the EndSARS protest gound – Lekki Tollgate.