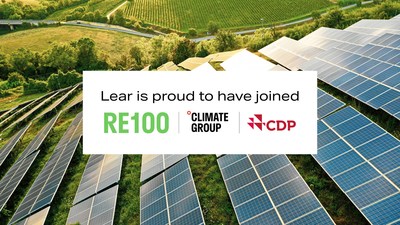 Lear Joins Climate Group's RE100 Initiative, Committing to 100% Renewable Electricity for its Global Sites by 2030

RE100 members commit to sourcing 100% of the electricity used across their global operations with electricity produced from renewable sources.

By integrating its Energy Efficiency Playbook and renewable energy strategy across the company, Lear plans to achieve 100% renewable energy for electric power consumed at its global sites by 2030.

Lear’s operations in Germany, Poland and the United Kingdom currently meet the goal. In addition, the company is operating six on-site solar installations in Europe, South America, and Asia, with a seventh installation planned to be announced later this year.

Lear will use a combination of methods to procure and generate renewable electricity for its remaining global sites. The type of power source will depend on geographical location, applicable legislation and government regulations.

“Lear’s strategy, aligned with RE100 and the United Nations’ Sustainable Development Goals, illustrates our commitment to industry collaboration and building a more sustainable global economy,” said Lear Vice President of Renewable Energy and Sustainability Jozef Chrzanowski. “We are excited to become a member of RE100 and take another step towards a carbon neutral future.”

“Lear’s commitment to 100% renewable electricity globally by 2030 demonstrates its leadership in energy transition,” said the Director of Energy at Climate Group Sam Kimmins. “Together, our RE100 members represent a powerful force for positive change, and we encourage all large-scale businesses to join us.”

RE100 is focused on accelerating change towards zero carbon grids by 2040.

Lear, a global automotive technology leader in Seating and E-Systems, enables superior in-vehicle experiences for consumers around the world. Lear’s diverse team of talented employees in 38 countries is driven by a commitment to innovation, operational excellence, and sustainability. Lear is Making every drive better™ by providing the technology for safer, smarter, and more comfortable journeys. Lear, headquartered in Southfield, Michigan, serves every major automaker in the world and ranks 186 on the Fortune 500. Further information about Lear is available at lear.com or on Twitter @LearCorporation

RE100 is a global initiative bringing together the world’s most influential businesses committed to 100% renewable electricity. Led by Climate Group, in partnership with CDP, our mission is to drive change towards 100% renewable grids, both through the direct investments of our members, and by working with policymakers to accelerate the transition to a clean economy. The initiative has over 370 members, ranging from household brands to critical infrastructure and heavy industry suppliers. With a total revenue of over US$6.6 trillion, our members represent 1.5% of global electricity consumption, an annual electricity demand higher than that of the UK.

2 thoughts on “Lear Joins Climate Group's RE100 Initiative, Committing to 100% Renewable Electricity for its Global Sites by 2030”