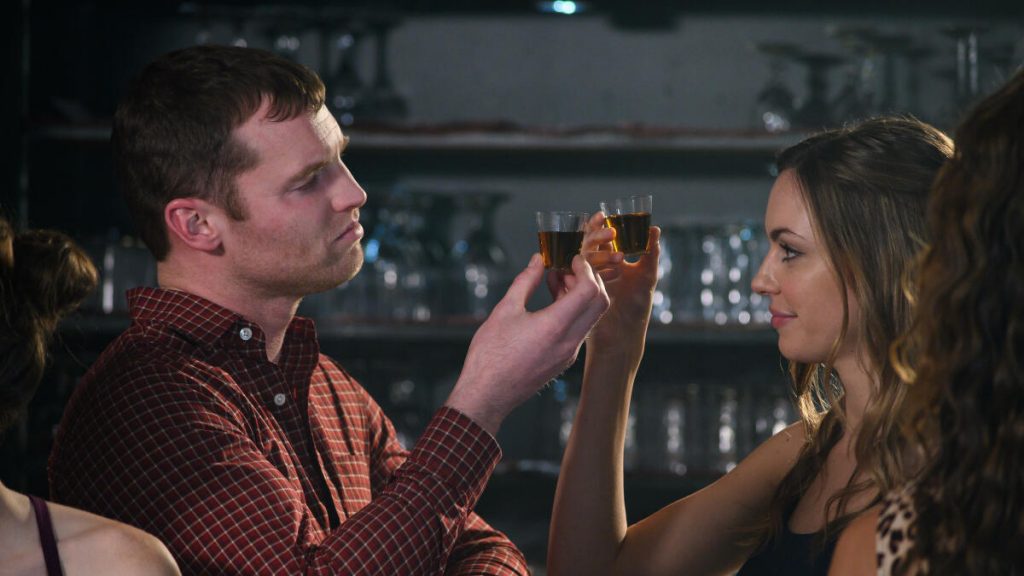 ‘Letterkenny’ is the wholesome, filthy, endlessly quotable hangout comedy of your dreams

You’ll know in the first three minutes of Letterkenny‘s first episode whether this show is for you. After a brief title card introducing this small Canadian town — “Letterkenny consists of hicks, skids, hockey players and Christians. These are their problems.” — we meet farmers Wayne and Daryl, manning their roadside produce stand. Two hockey players roll up, and for petty, small-town tribal reasons, are spoiling for a fight. They whip off their shirts, and Wayne and Daryl, almost literally without batting an eyelid, proceed to verbally demolish them both with military precision.

“What’s up with your fucken body hair, big shoots? You look like a 12-year-old Dutch girl,” deadpans Wayne, rural Ontario vowels around crisp consonants. “Your esthetician coif that for ya?”

The combination of specificity, savagery, convoluted insults that verge on Shakespearean, and idiosyncratic small-town syntax makes Letterkenny the kind of show that seeps into your personal vocabulary almost immediately. When our dog is being extra needy or zooming around the living room, my partner tells him “Might wanna take about 20 percent off there, bud.” When it’s time to get on with a task or a story, one of us will declare “Pitter patter” (short for “Pitter patter, let’s get at ‘er”). If anyone within earshot begins a sentence with “To be fair”, my brain simply cannot help but repeat it in three-part harmony with heightened, plummy vowels. Once you dive in, you’ll understand.

Letterkenny began as a Twitter account, then a web series called Letterkenny Problems, created by Jared Keeso, who based both on his own hometown of Listowel. Keeso also plays Wayne — a good ol’ boy with a lantern jaw and baby bangs, perennially clad in a flannel shirt tucked into well-fitted straight-leg jeans, with a permanent squint and a general air of stoic exasperation at the nonsense other people constantly visit upon him, from his awkward buds to men challenging him for the title of Toughest Guy In Letterkenny.

Wayne, his sister Katy (Michelle Mylett), their goofy lifelong friend Daryl (Nathan Dales), and the gnomic and good-hearted Squirrelly Dan (K. Trevor Wilson), when they’re not chorin’ (working), spend most of their time sitting around at the produce stand, drinking heavily, getting into donnybrooks (fights), drinking after getting into donnybrooks, smoking darts (cigarettes), and in their own way, helping to maintain the delicate peace in their 5,000-person Ontario town.

But most importantly, they banter. The wordplay of Letterkenny is a complex, rapid-fire patter of highly specific regional slang, ten-dollar words, pop culture trivia detailed enough to rival Community’s convoluted asides, fart jokes, a lot of cursing, and an infinite supply of finely crafted insults.

The peak wordplay moment might be the season 3 (literal) cold open, where Keeso delivers an astonishing stream of alliterative reflections on winter, inspired by Blackalicious’ iconic “Alphabet Aerobics”.

The aforementioned hockey himbos, Riley and Jonesy, speak in a near-unintelligible stream of (reportedly accurate) ice hockey slang, and gym-bro jargon. They are devoted to, in ascending order, hockey, sexual conquests, and each other, and I would die for them. The “skids”, a group of rave-goth meth-heads in town, are centred on bowler-hatted aspiring DJ Stewart, who looks like an off-brand Gerard Way, wields unnecessarily fancy vocab like a subreddit neckbeard, and not-so-secretly pines for Katy.

There’s also the Natives from the reserve near the town, led by the flinty, fascinating Tanis (Kaniehtiio Horn), who might be the only person in Letterkenny tougher than Wayne. (The show’s been praised for its consultative, accurate approach to its First Nations representation.) And there’s no shortage of recurring characters — from the cringey, glass-closeted minister Glen (co-creator Jacob Tierney) and the gurning, aggressively hypersexual bartender Gail (Lisa Codrington) to the shit-talking hockey god Shoresy (Keeso again, his face always obscured and other body parts often very much on display), and two guys who may or may not have fucked an ostrich one time.

The gang’s low-stakes antics veer wildly between the small-town quirks and wholesomeness of Parks and Recreation to the self-involved chaos of It’s Always Sunny in Philadelphia. It’s not especially concerned with being politically correct, but it’s never mean; moreover, the hicks and their friends offer a vision of “traditional” masculinity that is largely comfortable with the modern world and the rights of all people to live as they want as long as they’re not hurting anyone else. (Squirrelly Dan is called out occasionally for being awkward in Katy’s general direction early on, but by season 3 will confidently call out a friend for casual “homophobism” and loves sharing insights from his women’s studies course.)

There’s a one-on-one fistfight or all-out brawl in just about every episode, because this is how certain problems simply must be solved — but they’re filmed in balletic slow-motion, and there’s almost always a handshake and a hand reaching out to get the loser up off the ground afterwards. The hicks’ continuum of “tough” or “soft” isn’t binary, nor is it ascribed any moral or social value beyond entertainment. They might rib each other for being “10-ply”, but it’s clear as early as the second episode that “softness” and play are to be revelled in as fully as a donnybrook or getting hammered on whisky: Katy and Wayne throw Daryl’s annual “super soft birthday party”, which features cupcake decorating, colourful cocktails, plastic tiaras, and a horse dressed up as a unicorn. And in almost every one of the brief interstitial shots to camera where Keeso introduces scenarios that all allegedly happened “the other dayeeeeee”, he is holding a puppy. (One of the few times Wayne’s stoic squint breaks is when he addresses one of his dogs directly, and it’s, as Stewart would say, wondrous.) 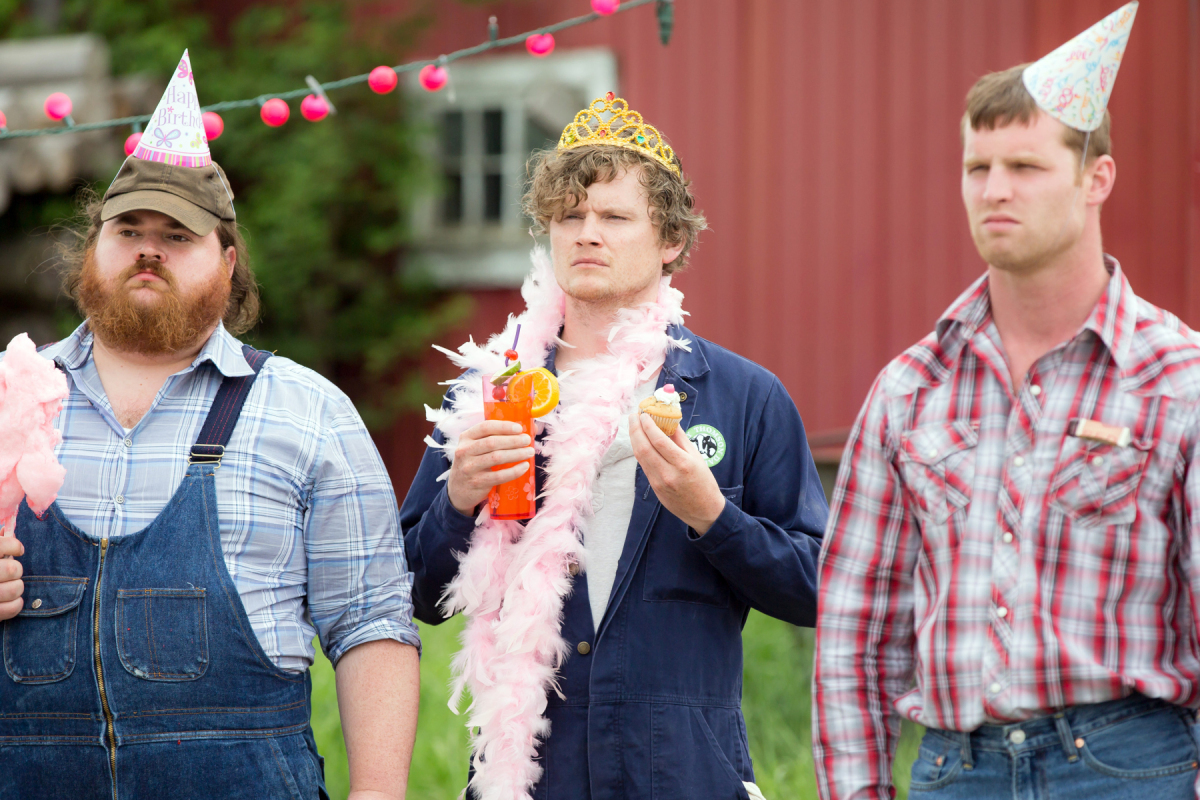 There is also a fistfight during this party. Obviously.
Credit: hulu

Letterkenny‘s also notable for its unabashed sex positivity. Wayne will occasionally note that “There’s such a thing as too much butt talk and a fella oughta be aware of it”, but enjoys a no-strings toe-curlin’ as much as anyone. LGBTQ representation ranges from the cartoonish — Glen, and the adorably shrieky skid Roald who plays a dog-collared Smithers to Stewart’s Mr Burns — to the matter-of-fact. Katy, whose open bisexuality and fondness for dating two guys at once is never judged or questioned except for reasons of taste, relishes a good ogle as much as the boys, but she’s more than a Cool Girl token.

Like Parks, the first season is a little wobbly at times, with some characters later quietly redrawn and certain story arcs dropped — so don’t be too put off by the weird Christians or the tiresome one-note joke of Glen’s flamboyance. The seasons are short — usually six episodes each with a different holiday-themed special that’s less serialised — but there are nine of them, with two more on the way, and the rewatch value is high.

Letterkenny is deeply Canadian — from the All-Dressed flavour Ruffles the hicks snack on to the fundamental good manners embedded in Wayne’s personal code of honour and a reference to Canadian YA classic This Can’t Be Happening At Macdonald Hall that made me spit my drink. But it’s wonderfully universal at the same time. All small towns have petty dramas, unique traditions, colourful locals, and a side-eye ready to go at the first hint of big city pretension; anyone who’s grown up or spent time in a farm town will recognise some of these people. This is a hangout sitcom with a heart as big as its wit is quick, and a few simple rules: If a friend asks for help, you help him. Belts are unnecessary if you just buy pants that fit. And as long as everybody’s having a good time, there’s no reason to be a poopypants.

All nine seasons of Letterkenny are available to stream on Hulu.