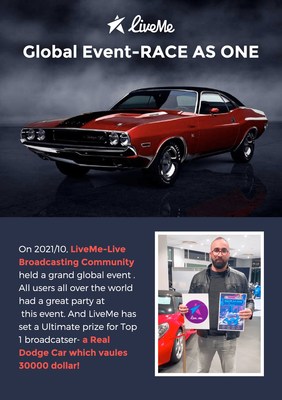 LiveMe Announces Winner of Its Record-Shattering Race as One Challenge

NEW YORK and RIYADH, Saudi Arabia, Jan. 13, 2022 /PRNewswire/ — LiveMe, one of the most popular live video social networks in the world, has concluded the global Race as One challenge, which was held on its app from October 21-28, 2021. The champion, user name Tiger, who clinched the title with a record-breaking 7 million coins gift, won a Dodge car with a value of $30,000 as the grand prize. A thank-you video was recently shared online.

“I would like to thank LiveMe for holding such an amazing event that is truly the first of its kind,” says the winner, champion of the 2021 Race as One challenge. “I’m thrilled to have won this event, and incredibly excited to receive this fantastic Dodge car as the prize. I can’t wait to take the car out for a spin. Thank you, LiveMe! I love the app and its community!”

The Race as One challenge broke a new record for LiveMe, with an unprecedented number of users participating in the event. More than 30,000 users sent gifts, while 90% of mega users participated in the challenge, resulting in incredibly fierce competition among the app’s biggest users. Moreover, more than three million gold coins were awarded in three hours, shattering its records.

LiveMe provides a platform for independent creators from around the world and all walks of life to showcase and monetize their unique talents. It enables them to do so through the app’s virtual gifting economy, which has generated millions of dollars in revenue for the broadcasters.

As one of the most popular live video platforms in the world, LiveMe creates real connections between people across all corners of the globe. Independent creators, such as musicians, singers, actors, DJs, comedians, or storytellers, can get in touch with their fan base and share their talents with them via the app.

LiveMe’s mission is to enable its community of independent creators to succeed in an increasingly saturated digital environment, all the while abiding by a strict and unwavering commitment to security and safety. Its overriding objective is to make LiveMe the most vibrant and positive digital media channel for creators and fans alike.

LiveMe was named one of Fast Company’s Most Innovative Companies of 2018. It has launched both the iOS and Android versions of its app.