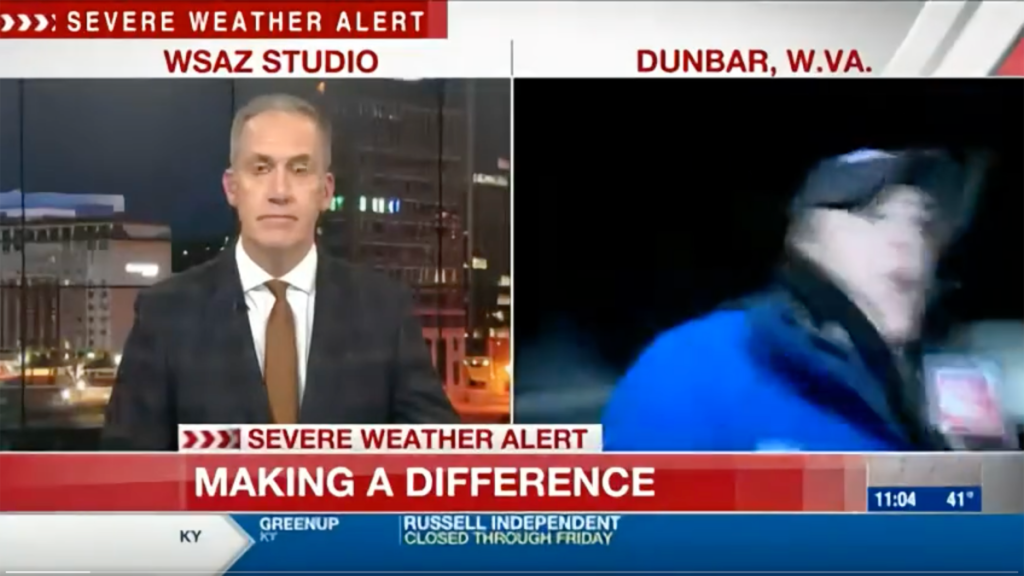 In a new shocking viral video, a reporter gets hit by a car while live on the air. And yet she gets up and keeps on reporting.

Two things can be true about this video. One: The reporter is tough as nails. And two: There is no reason she should have been in such a dangerous position, and it is awful to see her suffer what must’ve been a painful injury.

Reporter Tori Yorgey was live for WSAZ in West Virginia, reporting on severe weather that caused a water main to break when a car seemingly drifted straight into her. Here’s the video, posted by Timothy Burke on Twitter.

Yorgey mentions that she was actually hit by a car in college, before rising to her feet and setting up her camera. She was all by herself filing the report, there was no one behind the camera.

“It’s a one woman band,” she said, before reassuring studio anchor Tim Irr and a person on scene that she was OK. It’s unclear from the video if Yorgey was talking to the person who hit her.

While it is certainly impressive that Yorgey recovered and got back on air, it’s shocking and awful to see her get hit by a car. She was sent out to report on this dangerous situation, in severe weather, all alone. It’s a common trope for TV news to throw reporters into these dangerous situations. But with local TV especially cutting workers, it’s now even more dangerous because reporters like Yorgey are expected to perform multiple jobs at once. There is no time or ability to check for your safety when you’re the on-air reporter, camera operator, and sound person.

Lots of people online, other journalists especially, were upset at the situation.

Yorgey was seemed to be operating off adrenaline after being hit by the car on-air. Hopefully she is recovering well from the incident and perhaps TV stations will soon stop putting reporters in such dangerous situations.