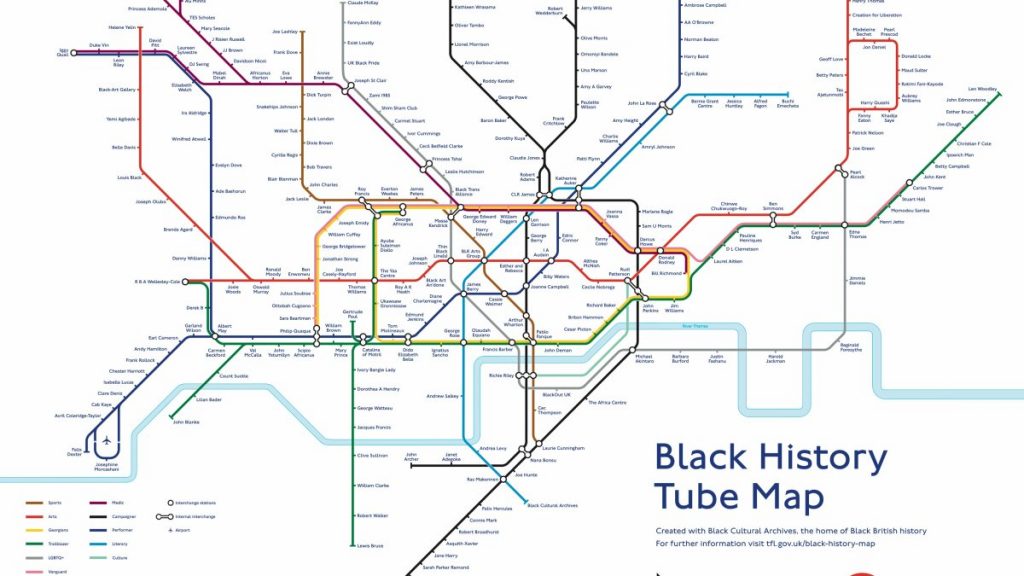 London’s underground transport system (TfL) is celebrating the history and legacy of Black people in the United Kingdom with a newly designed tube map.

In celebration of Black History Month (which is observed in October in the UK), TfL collaborated with the Black Cultural Archives, a space for positive representations and empowerment for people of African and Caribbean descent.

Sadiq Khan, the Mayor of London, launched the map, which features over 270 Black people spanning hundreds of years of history, including trailblazers, athletes, artists, LGBTQ+ leaders, performers, and community organisers, among others.

Each person featured has made a lasting impact on British society. There’s London Transport’s first Black motorbus driver, Joe Clough; the co-founder of the iconic Notting Hill Carnival, Claudia Jones; And the BBC’s first Black woman programme maker, Una Maud Victoria Marson. The list goes on, with each story undeniably fascinating and deserving to be told.

The names of the Black Londoners on the map replace the names of each tube stop. The names of the tube lines themselves have also been altered to represent linking themes. For example, the District Line honours trailblazers while the Central Line features those in the arts.

“This clever adaptation of TfL’s recognisable Tube map presents a wealth of information and history about the accomplishments of Black people in Britain in a fun and creative way,” said Khan.

The map is available for pre-order on Black Cultural Archives and the London Transport Museum.