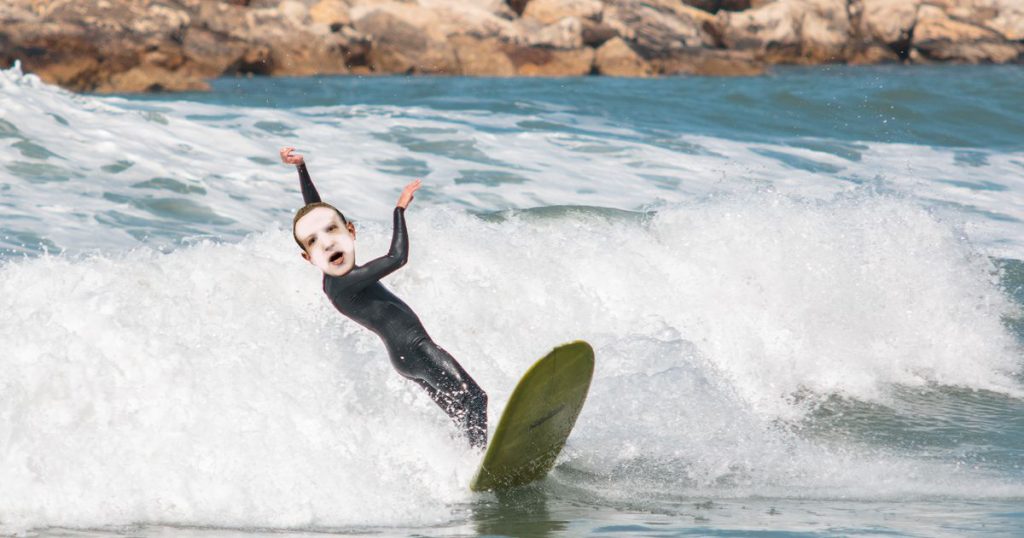 Facebook CEO Mark Zuckerberg has come out, once again, in defense of the defenseless: The thick layer of white sunscreen he slathered all over his face while surfing last July.

In an Instagram live video on Tuesday between Zuckerberg and Instagram head Adam Mosseri, the pair covered a lot of ground. They talked about their kids; announced that Instagram is working on creator shops, affiliate commerce, and a branded content marketplace; they even discussed bringing back the poke. But the most notable moment was when they turned to the infamous photo of Zuckerberg surfing in Hawaii.

Zuck explained to Moserri that he was “eFoiling around” with pro surfer surfer Kai Lenny, when he noticed “this paparazzi guy” following them. He said he didn’t want to be recognized, so he “put on a ton of sunscreen.”

It sure did — if you believe this version of events. Regardless of why it happened, though, the photo spread across the internet and led to a pretty exceptional season of dunking on the tech leader. (If you would like to revisit this epic photo, here you go.)

There’s a lot to unpack with Zuck’s story of attempted disguise, but the main problem is that it just doesn’t add up.

The first red flag is that putting sunscreen on your face doesn’t actually work as a disguise. Sam from A Cinderella Story was better protected in that mask that only covered her eyes. Captain America and Natasha Romanoff were better protected from S.H.I.E.L.D in Captain America: The Winter Soldier with their little baseball caps and hoods. But beyond it being a lackluster attempt at concealment, it also contradicts the story he has told in the past.

During a leaked Q&A with employees shortly after the picture made the rounds online, Zuckerberg didn’t mention ever seeing the paparazzi. Instead, he said he spent all day playing in the sun before returning home and seeing a photo that did not make him look very good.

“I’m not a person who’s under the illusion that I look particularly cool at any point with what I’m doing,” Zuckerberg said during the leaked Q&A, according to The Verge. “But when you’re eFoiling down the coast of Hawaii, and it’s beautiful and it just feels like it’s awesome — and then you come back online and you see that’s the photo, that’s what you look like — it’s like, OK. Alright. That’s maybe quite a bit more sunscreen than I thought I was wearing.”

At the time, he added that he is “not going to apologize for wearing too much sunscreen.”

“I think that sunscreen is good, and I stand behind that,” he said.