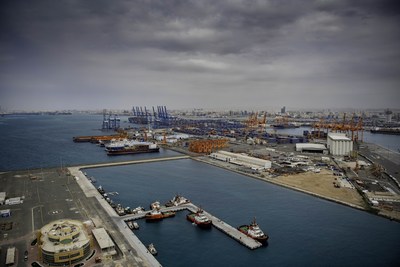 RIYADH, Saudi Arabia, Jan. 24, 2022 /PRNewswire/ — The Saudi Ports Authority (MAWANI) has been instrumental in strengthening the Kingdom’s maritime sector in 2021, helping the nation make its mark on the global shipping and freight landscape. 2021 represented a banner year in the Kingdom’s drive to become a global logistics hub that connects three continents.

Thanks to the Authority’s relentless efforts to meet its ambitious goals for the sector, the Kingdom ranked 16th in the 2021 edition of Lloyd’s List One Hundred Ports in terms of volume handled. Three of the country’s prominent ports featured in the annual rankings, namely the Jeddah Islamic Port (37th position), King Abdullah Port (84th position), and King Abdulaziz Port (93rd position).

As a testament to the stature and competitive appeal of Saudi ports, the Kingdom was declared the world’s fifth-fastest country in container ship handling by the United Nations Conference on Trade and Development (UNCTAD) annual index report for 2020, thus marking the country’s first-ever entry in the world’s top 10 seaports list. The Kingdom also moved up on the Liner Shipping Connectivity Index during Q3 2021to lead the region with 70.68 points.

In parallel with the launch of the National Transport and Logistics Strategy, MAWANI announced its blueprint for a prosperous and sustainable maritime sector that includes initiatives to develop the national economy and transform Saudi ports into investment magnets.

In its bid to bolster the Kingdom’s competitive edge, MAWANI had inked a deal with Maersk to invest SAR500 million for setting up a fully integrated logistics zone at Jeddah Islamic Port, which is set to be the largest in the Middle East. Work also commenced on the development of Phase 1 of the SAR3 billion South Container Terminal at Jeddah Islamic Port by DP World.

To further strengthen the Kingdom’s trade ties and global partnerships, MAWANI added four maritime shipping services out of Jeddah Islamic Port and King Abdulaziz Port in Dammam in 2021, connecting them with ports in the Indian Ocean, Northern Europe, Djibouti, China, and Bahrain. The Authority also signed an agreement with Hapag-Lloyd to increase container throughput across Saudi ports.

In keeping with its strategic objective of maximizing and fully leveraging the increased capacity of Saudi ports, MAWANI executed 32 infrastructure projects that involved the construction of new berths, renovation and expansion of existing berths, and dredging of turning basins. The Authority also opened up investment opportunities to develop and operate multi-purpose terminals at eight Saudi ports.

In its mission to enhance customer experience, MAWANI developed seven new online systems, granted 16 operations licenses to national and foreign shipping agents, and brought online a new trucking appointment booking system. Recognizing the critical role that the ports and logistics sector plays in various industries, from manufacturing to food security, MAWANI had signed a deal to build the Middle East’s largest grain and animal feed import and processing terminal. With 120 silos, this terminal will be able to handle a whopping eight million tons of bulk grain per year.

Commenting on 2021’s achievements, H.E. Omar Hariri, President of the Saudi Ports Authority, said: “Thanks to the support of our Leadership and coinciding with the launch of the National Transport and Logistics Strategy, the Kingdom has established a clear roadmap to transform the maritime sector and raise its ports to world-class levels. We intend to invest more in our port infrastructure for seamless integration with other modes of transport across the country. We further aim to achieve an annual capacity that exceeds 40 million TEUs through greater ties with international shipping routes.”

His Excellency added: “MAWANI’s achievements come on the back of the support of H.E. Eng. Saleh bin Nasser Al-Jasser, the Minister of Transport and Logistics, the Saudi Ports Authority’s Board of Directors, and the effective collaboration between government agencies to integrate the national transport system and execute our strategy. Working closely with our partners has been and will remain a key to success in turning Saudi ports into significant value contributors to the national economy.”