Meet CEO Carlton Myung of Arbeon, a company that converts unreality into reality 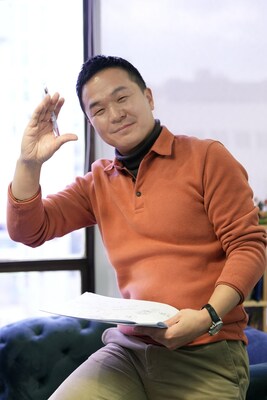 SEOUL, South Korea, Dec. 27, 2022 /PRNewswire/ — Recently, Carlton Myung, CEO of Arbeon had an interview with reporter Lee Sang-won from ETNEWS INTERNET. Below is the report.

The atmosphere of the start-ups this winter is colder than ever. According to the “StartupRecipe Investment Report” provided by StartupRecipe, a media outlet devoted to start-ups, there was a total of 82 cases of investment on start-ups in November, not even reaching 100 cases. Meanwhile, the total investment amount was KRW 559.8 billion, with a 41% decrease compared to the same period last year.

In this market atmosphere, there is a start-up that has successfully secured a contract for Series A funding of KRW 29 billion and Series B funding of KRW 100 billion, even at the pre-release stage of the service. This start-up is Arbeon, an enterprise that creates a unique service that aims to provide a new communication culture by presenting diverse digital experiences on top of daily objects. We met Carlton Myung, the CEO of Arbeon. These days, everyone in Arbeon is busy preparing for the start-up’s global debut, including its participation in CES 2023 as an independent booth in January next year.

Q. Can you please introduce the company and yourself?

It’s nice to meet you. My name is Carlton Myung, the CEO of Arbeon, a start-up company that builds AR (augmented reality)-based social media. We create a communication app service with a new style in which communication takes place in real space rather than virtual space.

We stay vigilant toward stagnation and tend to fragment ourselves ceaselessly as creators. We always look for something innovative, and we have been highly interested in new technologies and outlooks. Well, we are now creating another new service somehow. We are so into the work we do with the mindset of creating the best service ever as creators.

Q. I heard that the company name has been changed recently. I am curious as to what the reason was and what the new company name means.

People with sharp attention to detail would probably have noticed that the new name “Arbeon” contains the word “AR (augmented reality).” AR is the absolute element and core technology in all the areas of our company and service and the direction which our business aims to pursue. The company’s mission of pioneering a completely new communication culture and AR networking era, with a unique AR technology that is differentiated from the existing AR technologies, is embedded in the name.

Q. Which services will Arbeon introduce, and what are their characteristics?

Arbeon is an AR social media (online) service that provides production, consumption, sharing, and recommendation services in the real space (offline). While the communication services you may have used so far have been a two-dimensional communication experience on a flat environment such as an app or a webpage, Arbeon is a platform where users can communicate right on top of their daily life. We can say that it is a 3- or 4-dimensional communication experience where users can move back and forth between the AR experience in the real space and the Meta World (metaverse) in the virtual space.

Communicating with real-life, offline objects in the online space is the most powerful feature of the Arbeon service. As it provides a digital experience directly on a real-life object, you can enjoy an incredibly immersive form of communication.

However, it is hard to define Arbeon simply as a social media. Our service provides a multitude of experiences, such as commerce, an AR content creation tool (AR Cut), a search tool, live chat, etc., beyond just a social media platform. Therefore, the definition of the service can change depending on how the users and enterprises use our service. How the Arbeon service can be interpreted depends on the users. It’s open-ended, shall we say? That’s it. (Laughs)

Despite all that, “communication” is the fundamental beginning of our service experience and its absolute essence. Therefore, we think it would be the most convenient to understand it as an “AR social media.”

Q. I heard that Arbeon has secured a Series A funding amount of KRW 29 billion recently. Can you tell us more about the upcoming investment plans?

We have successfully secured the Series A investment of KRW 29 billion recently in Singapore. Right after that, we proceeded with signing the contract for a Series B investment of USD 100 million (KRW 100 billion). We think that it is a notably rare case that we were able to secure an investment of more than KRW 130 billion before the launch of the service, considering that the current market situation is also called the deep freeze for start-ups. Although Series C is in the planning stage, we plan to pursue an investment scale of over USD 1 billion (KRW 1 trillion) in late 2024 or early 2025.

Q. What do you think attracted the investment for Arbeon?

Unreality can become a reality in Arbeon. I think that receiving a lot of attention like this even before the service is released can be one example of it. It is even more so considering the current atmosphere of the global market. At this stage, I cannot provide details, but a renowned investment management company on Wall Street looked at our service portfolio and told us that it would make a big investment on us with an incredible comment that we are “likely to become the service of the next generation that exceeds TikTok or Facebook.”

When I first designed this project about 10 years ago, I declared that I would create a service that can retain memories on real objects with AR, even when there is no prior learning. I remember hearing, “It is an unrealistic idea, impossible even for the best developers in Silicon Valley.” However, the technology of Arbeon today has succeeded in creating a service that can detect everything in the real-life space as soon as it is scanned on the app, even without prior learning, and lets users communicate using augmented reality. It was truly the moment where the unreal turned real.

A lot of investors show interest in our vision and unique technologies, and they continue to collaborate with us in order to make Arbeon successful. Converting unreality into reality—I am certain that this is the core competitiveness of Arbeon.

Q. We were informed that Arbeon will be participating in CES next year, although the service has not been released yet. What is the reason behind this?

We plan to participate with an independent booth at the Central Hall instead of Eureka Park (zone designated for Korean companies) in CES 2023, which will be held in Las Vegas, USA, this coming January. In the booth, an experience zone will be prepared so that you can experience the Arbeon service in advance. I hope anyone who comes to CES 2023 can drop by and experience it. (Laughs)

Preparing for the first participation in CES on a scale as large as this as a start-up that has not released its services yet is a huge challenge for us in itself. It can also be said to be unrealistic. The main reason we are participating in CES 2023 is to make our service public to the global market and to declare our future plans.

Also, Arbeon is a platform-based service. Therefore, it requires collaborations with a lot of companies and users, and we plan to actively build partnerships with numerous companies starting next year. We could say that the purpose of our participation in this CES would be to successfully push through with our B2B strategies and large-scale promotional activities for the success of our company in 2023.

6. What is Arbeon’s next goal?

Our ultimate goal in 2023 is to release the service. Using the domestic release as a turning point, we plan to release the Open Beta Test (OBT) as a global service.

B2B partnerships are an essential element for releasing a service. Therefore, we plan to promote the partnerships in earnest to provide users with diverse content and information after its release. In fact, we are discussing a partnership with several prominent companies in Korea and overseas. Moreover, we plan to collaborate with influencers, creators, and celebrities by supporting them actively so that they can also build new growth potential within Arbeon.

Finally, we are set to move to a new company building in March next year. We are working on an interior design where our unique identity is embedded, as it is a new space for us. Our other goal is to be called “the number 1 start-up company people want to work at.” As of December, there are about 80 members in our crew. We plan to increase the number to more than 200 next year. For those who want to experience a historic moment with Arbeon, we will be looking forward to your active application.

Arbeon leads a completely new communication culture in the world that has never existed before with its unparalleled technology. We hope for your interest and support toward our journey.