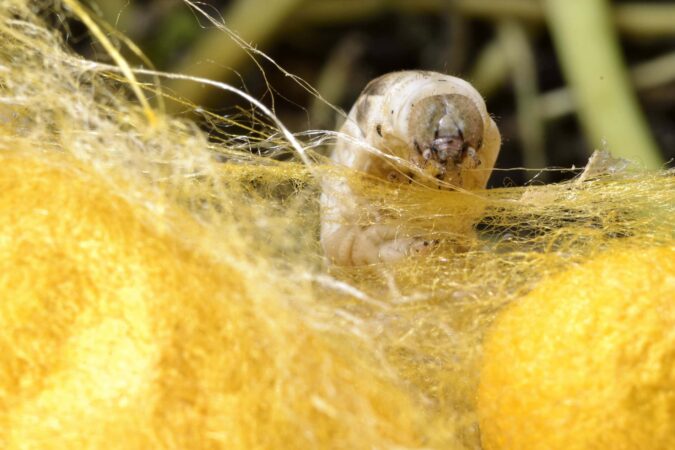 Standard silkworm silk has been made stronger than spider’s silk, one of the toughest materials known, by bathing it with metals and respinning it

Dissolving silkworm silk and remaking it in a solution of sugar and zinc and iron metal ions has made it stronger than most spider silk, one of the toughest and strongest materials in nature.

There are different ways to make artificial spider silk, several of which involve dissolving silkworm silk, which is weaker but more easily produced, but the resultant material often falls short of replicating the unusual mechanical properties of the threads that make an arachnid’s web and is difficult to produce at scale.

Now, Lin Zhi at Tianjin University in China and his colleagues have developed a method that strengthens silkworm silk by first dissolving it in either sodium carbonate or papain, an enzyme from papaya, and then respinning it in a bath of sugar, ethanol and zinc and iron ions.

The resulting silks, depending on how they had been dissolved, had properties that exceeded those of natural silks. The researchers found that the average force the silks could receive without stretching (up to 2 gigapascals) was 70 per cent higher than the average value from natural spider silks (0.9 to 1.4 GPa). Its Young’s modulus – a measure of how easily it can stretch – was higher than any natural silk, meaning it is stiff rather than stretchy.

Lin says that these properties of stiffness and strength are better than those of almost any natural spider silk and this is the first artificial silk to achieve that landmark.

Comparing this artificial silk’s properties with an average of natural spider silks leaves out some natural outliers, like that of the golden silk spider (Nephila clavipes), says Fritz Vollrath at the University of Oxford. “I think the consensus is Nephila dragline silk, which is the best if properly collected, is a fair bit stronger than what they’re showing.” This has been shown to have a tensile strength of up to 2.9 GPa.

The artificial silk also doesn’t show the same combination of unusual properties as natural silk, says Vollrath, such as its extensibility or variable amount of crystalline material (known as crystallinity).

“A spider can spin its silk to the crystallinity that it likes, or that it wants or that it needs, for that particular purpose. That changes the mechanical properties,” says Vollrath. “What [Lin’s group] has achieved is very good and very interesting, no doubt, and there’s more to come from that approach for sure, but it’s a bit disingenuous to say, ‘now we’ve made a silk that is better than spider silk’.”