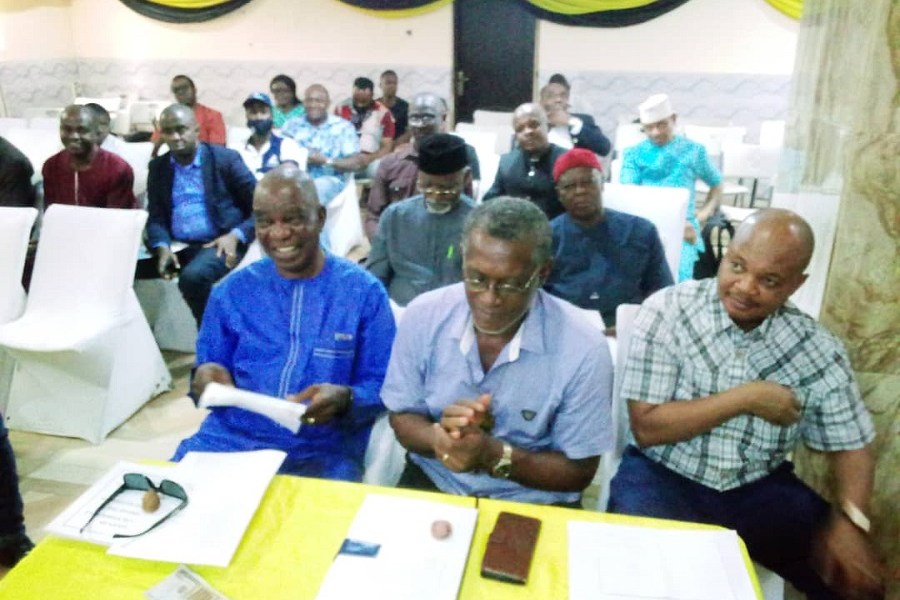 Prof Gordian Ezekwe  was bestowed with a posthumous award, which was received by his nephew, Romanus Ezekwe, on behalf of his family and the people of Abagana community, in Njikoka Local Government Area of the State.

Participants at the Public lecture

The honour is in appreciation of the late Prof’s contribution to innovation and engineering during the civil war through his Technological skills that led him to manufacturing war bombs (Ogbunigwe), production equipment, spare parts and refining of  fuel for the Biafran side during the Nigeria-Biafra civil war.

Romanus Ezekwe said the late Prof further distinguished himself working for the Federal Government where he served as Federal Minister of Science and Technology under President Ibrahim Babangida in 1989 and Vice Chairman of  the National Agency for Science and Engineering Infrastructure (NASENI).

NASENI was a brainchild of Prof Ezekwe which was a major breakthrough in the technology management space in Nigeria, he was CEO of the agency under Babangida and General Sani Abacha and died while in office in 1997.

The honours were bestowed on him and other deserving Engineers namely : Engr. Professor Daniel Oraegbuna Nnamdi (D.O.N.) Obikwelu, a renowned metallurgical engineer and pioneer Head of Department of Metallurgy at the University of Nigeria Nsukka (UNN) and a Greek immigrant who naturalized as a  Nigeria late Mr. Romeo Barberopoulos.

He initially worked as an Electrical Engineer at AG Leventis.

Mr. Barberopoulos, came to Nigeria in 1958 when he was involved in set up of the first Television Station in Africa (WNTV Ibadan).

As  WNTV commenced operations, he assisted in setting up service workshops for TV and Radio stations  in Ibadan, Kaduna and Benin and trained large numbers of Nigerians in the field. He left Leventis in 1965 eventually setting up the first major commercial foundry in Nigeria, Nigerian Foundries Limited (NFL) in 1969 which is still in operation in Lagos and Ota, Ogun State.

They are now part of Nigerian Foundries Group, the biggest Foundry in West Africa.

Speaking at the event, Professor Aje Tokan, the National Chairman of the NIMMME (3M), described the honorary award given to the three Prominent Engineers, “a distinguishing honour for their indelible contributions to the 3 M disciplines and practice”.

Prof Tokan, who was represented by Engr. Nathan Abia-Bassey, while congratulating one of the honourees, Prof. Obikwelu, a Past National Chairman of NIMMME, urged him to leave up to the expectations of the society.

He urged the Federal and Anambra state government to immortalized his kind contribution to the nation’s peace and development.

The National Chairman, use the event to solicit for greater support and collaboration with the federal government, to enable the institution realize its mandate and to contribute to the present administration’s desire to diversify the country economy.

While reading the citation of the Honourees, Engr. Michael Orekyeh, the Awka Chapter Chairman of NIMMME, said the lecture series was also designed to simplify the materials engineering profession, industry, processes and business for the general public.

“We need to break the MMME disciplines down to simple terms and encourage Nigerians to understand them better, invest in them and develop our technology and economy with more locally produced goods in automobile, oil and gas, machinery and equipment and so many other fields  in the country through foundry and metalworking.

“We hope the E.B.O characters, stories, profiles and legacies will inspire a new generation engineers and entrepreneurs and perhaps what we learnt from them and the chosen theme for lectures will produce developments that will push Materials Engineering to new and positive heights in Nigeria,” Orekyeh stated.

In a brief biography of Prof. Ezekwe and Mr. Barberopoulos, Engr. Orekyeh, revealed that Prof. Ezekwe, was a key planner and contributor to many inventions, war fare material and products on the Biafran side of the Nigerian Civil war and even more during his time as Director of Research of PRODA Enugu.

During his time as the Federal Minister of Science and Technology and as Vice Chairman of the NASENI which formed so many agencies like NEDDI, SEDI, ELDI, EMDI, HEDI etc., scattered across Nigeria, he became a household name for his genius and management abilities.

He commended and thanked the Anambra State Governor, Willie Obiano, for giving many professionals the opportunity to serve the state and understand how Governance works.

Prof. D.O.N . Obikwelu gave the main Lecture on Foundry Technology and Mr. Charles Enang (representing Mr. Vassily Barberopoulos GMD Nigerian Foundries) gave a talk on the future of Foundries in Nigeria, has since dedicated most of his life towards mentorship of Engineering professionals in Nigeria.

This was followed by questions, answers and contributions from the audience on Foundry and the Nigerian quest for development.