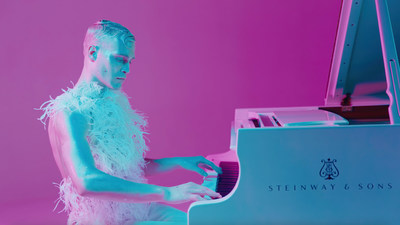 Growing up, Micah was inspired by Gaga and her bold song roster, making her one of the most influential musical figures in his life. The video showcases looks from fashion designer Zaldy, who has worked with Lady Gaga, Britney Spears, RuPaul and Michael Jackson.

Micah studied with Marsha Gerber and Enrique Graf. He earned a Bachelor of Music at the Curtis Institute of Music, working with Robert McDonald and Gary Graffman. He completed his Master’s degree at Juilliard with Jerome Lowenthal. He was awarded the Gilmore Young Artist Award in 2016 and has performed as a soloist with orchestras around the world including The Cleveland Orchestra, Philadelphia Orchestra and Orquestra Filarmónica de Montevideo. He has served as a recitalist and chamber musician at Lincoln Center, Verbier Festival, Spoleto Festival, Musicfest Perugia, Aspen Music Festival and collaborated with conductors including Joshua Weilerstein, JoAnn Falletta, Jahja Ling and Nicholas McGegan.

Other highlights throughout his career have included his debut at the Key Biscayne Piano Festival, the Queens Symphony Orchestra, and the Spoleto Festival with conductor Jonathon Heyward in ’19-20. In 2018, Micah made his Philadelphia Orchestra solo debut under Kensho Watanabe in Bernstein’s Symphony No. 2 The Age of Anxiety as part of the Leonard Bernstein at 100 Centennial. He made his Lincoln Center solo recital debut at Alice Tully Hall, presented by the Musician’s Emergency Fund, and performed at the Youth America Grand Prix Gala.

Micah’s 2022 season included a debut of Steve Hackman’s new work Bohemian Rhapsody in Blue, for piano and orchestra in Germany, a piece that re-arranges the two great rhapsodies in one piece. He is currently on tour in Italy with cellist Ludovica Rana, performing an all-Chopin program. The tour finishes in Milan at Sala Verdi, for La Societa dei Concerti.