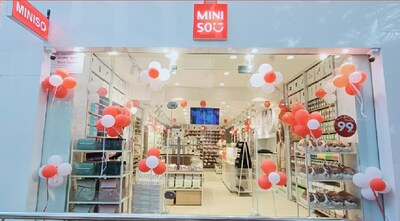 The globally popular lifestyle retailer sees around 60 new MINISO stores opened in India this year, for an expected total of about 220 stores in over 120 cities since the opening of its first store in Gurugram in 2017

NEW DELHI, Jan. 3, 2023 /PRNewswire/ — MINISO (NYSE: MNSO; HKEX: 9896) a global lifestyle retailer, offering high-quality household goods, cosmetics and food at affordable prices, has revealed as of the end of 2022, it set a record in India for the highest number of new store openings since the pandemic, estimated at around 60, the most in almost three years. Since the first store opened in Gurugram in 2017, MINISO has set up in 125 cities around the country, and is expected to exceed 220 stores by year-end, including 16 stores in Mumbai.

Around ten of these stores opened in December, one of which is a bright 110-plus square-meter storefront in first-tier city Bangalore on the swanky New Bel Road commercial pedestrian street. This store enabled MINISO to cover strategic business districts in other tier 1 and 2 cities, with further openings in Phoenix Citadel Mall in Indore, Unison Mall in the heart of Dehradun, Ranchi, and Hyderabad, among other cities. In December, MINISO also added another new store in Lulu Mall Thiruvananthapuram, which is the largest mall in India and near Technopark, the largest IT park in India.

In addition to the United States and Indonesia, India, with its large population, economic vitality, and rapid consumption recovery, is one of MINISO’s most important direct sales markets. The country is also among the top three markets for MINISO in South and Southeast Asia and the Company is well positioned for further growth in 2023 having continued to expand store count throughout the pandemic.

Performance in India this year has been outstanding, with sales performance this year increased by nearly 80% year-on-year. During Diwali, with aromatherapy products in MINISO’s New Delhi store seeing an increase of 27% month-on-month. Black Friday’s performance jumped 168% year-on-year, of which the directly-operated stores’ toiletry products were up 125% year-on-year. Women’s body care and perfume products also performed well, while fragrances, home supplies, and plush toys have always been the top-selling categories in India. MINISO, as always, stays committed to launching tailored products that meet the needs of local consumers.

Among retail brands, MINISO has steadily climbed the ranks in terms of scale and influence and is currently one of the most popular and visible brands among Indian consumers as well as the fastest growing among similar brands in the country.

MINISO’s outlook for 2023 and beyond looks strong in India

MINISO will continue with its flexible store expansion strategy adjusted to market conditions with a focus on opening high-performing stores. Tyrone Li, India head of MINISO, said, “During the pandemic, we adopted a more conservative store opening strategy and having seen the performance potential of first- and second-tier cities, next year we will mainly open larger stores there.”

In terms of e-commerce, MINISO’s focus will be on Amazon and Flipkart, the two leading platforms in India, and MINISO plans to launch products that specifically reflect trends for Indian online consumers.

“We can see the potential for growth in India and will continue to work with our existing and new partners here to boost our growth in the market,” Li added. 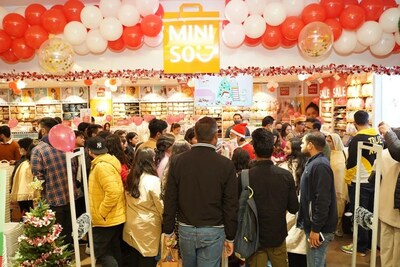 MINISO Group is a global value retailer offering a variety of design-led lifestyle products. The Company serves consumers primarily through its large network of MINISO stores, and promotes a relaxing, treasure-hunting and engaging shopping experience full of delightful surprises that appeals to all demographics. Aesthetically pleasing design, quality and affordability are at the core of every product in MINISO’s wide product portfolio, and the Company continually and frequently rolls out products with these qualities. Since the opening of its first store in China in 2013, the Company has built its flagship brand “MINISO” as a globally recognized retail brand and established a massive store network worldwide.