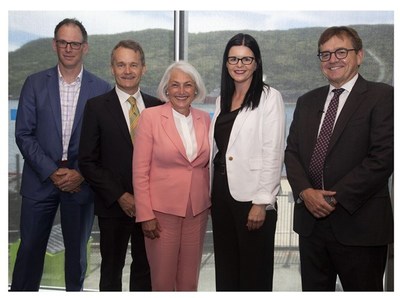 Today, the Honourable Jonathan Wilkinson, Canada’s Minister of Natural Resources, addressed members of the St. John’s Board of Trade to highlight the energy and resource opportunities Atlantic Canada can seize to create sustainable jobs and thrive in a global low-carbon future.

Minister Wilkinson spoke in advance of the Energy and Mines Ministers’ Conference that begins July 6 – a conference that will bring together the energy and mining ministers from the federal and provincial governments, and which will be co-hosted by the governments of Canada and Newfoundland and Labrador.

Minister Wilkinson emphasized the particular importance of the federal government working in partnership with the provinces and territories, as well as engaging Indigenous Peoples, industry and labour, to develop regional approaches that will foster prosperity and strengthen competitiveness while reducing Canada’s greenhouse gas emissions.

The Minister said the recently launched Regional Energy and Resource Tables seek to achieve all of those goals by having the Government of Canada partner with individual provinces and territories, Indigenous groups and stakeholders to identify and pursue high-impact, place-specific opportunities for sustainable growth.

He noted that Newfoundland and Labrador is one of three provinces (along with British Columbia and Manitoba) participating in the first phase of the Regional Energy and Resource Tables and that early discussions have included the significant potential for building and expanding upon the province’s competitive advantages in areas such as offshore renewables, hydrogen and critical minerals. He also commended Newfoundland and Labrador on its commitment to achieve net-zero emissions by 2050.

The Minister concluded that a sustainable natural resources-based economy will grow Canada’s economy in every region, while creating sustainable jobs and achieving Canada’s ambitious climate and nature goals.

“Just as any successful business must be capable of interpreting and reacting to changes in the business environment, countries must also be capable of thoughtful response and action to sustain and enhance their level of prosperity. The federal government is working with Newfoundland and Labrador, as well as Indigenous partners, industry and labour to collectively accelerate regional economic activity and position the province as an economic leader in the global shift toward a low-carbon future.”

“We are thankful to have Minister Wilkinson with us today to talk about the future of energy in Newfoundland and Labrador. Our members span many industries and sectors — they are businesses big and small, and we all have a keen interest and part to play in a low-carbon future. As the association representing over 700 businesses and over 10,000 business leaders, the St. John’s Board of Trade is pleased to host this important conversation that allows our members direct access to government. Together, with input from many groups and stakeholders, we can determine how we best use our resources, knowledge and technology to responsibly reach our full potential as a province as we move away from carbon-intensive industries.”