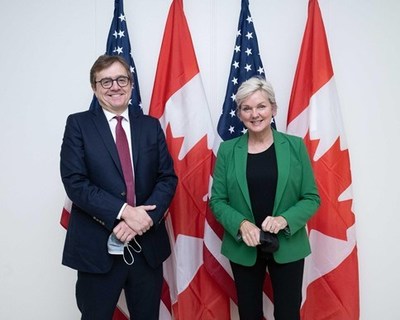 WASHINGTON, May 12, 2022 /PRNewswire/ – Canada and the United States share a common vision of a prosperous and sustainable North American economy. Our integrated energy systems and natural resource markets produce billions in cross-border trade and support hundreds of thousands of jobs on both sides of the border.

Russia’s unprovoked and unjustifiable invasion of Ukraine and subsequent sanctions on energy and related products have fundamentally altered the global energy landscape. Canada condemns recent efforts by Russia to use energy as a tool of influence and coercion. We are working closely with our international partners, while reinforcing our shared climate goals, to maintain the stability of global energy markets and to secure energy supply chains.

This week, the Honourable Jonathan Wilkinson, Minister of Natural Resources, was in Washington, DC, to meet with U.S. Secretary of Energy Jennifer Granholm, members of the Senate Committee on Energy and Natural Resources, senior White House officials from the National Economic Council and business leaders to advance global and North American energy security and to discuss shared opportunities to accelerate climate action and the transition to net-zero emissions.

Combating the climate crisis and addressing energy security requires ambition. Minister Wilkinson spoke with key U.S. officials about ways to strengthen collaboration on critical minerals, clean hydrogen, nuclear technologies, carbon removal and achieving a clean North American electricity grid. Specific actions that will be taken in the next year include:

This work builds on the Roadmap for a Renewed U.S.-Canada Partnership adopted by President Biden and Prime Minister Trudeau in February of 2021.

In addition to joint Canada-U.S. priorities, Minister Wilkinson and Secretary Granholm also discussed global energy issues as our countries prepare for the upcoming meeting of G7 Energy Ministers, in Berlin.

“Canada and the United States share a common border, common interests and common values. We have an opportunity to work actively together to accelerate effective implementation while concurrently building an economy that will provide jobs and economic opportunity for all. I look forward to working with Secretary Granholm to make this happen.”

“The United States and Canada have built a strong international partnership to protect the planet and drive down energy costs, and we are committed to deepening our bilateral energy relationship to build an equitable clean energy future. Together, with the leadership of Minister Wilkinson, we will work to accelerate the clean energy transition in both our countries, spurring job growth and ushering in a 100% clean energy future.”