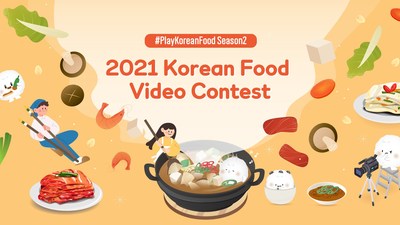 SEOUL, South Korea, Dec. 29, 2021 /PRNewswire/ — The ‘2021 Korean Food Video Contest for Foreigners’ was held for a month from November 19 to December 18 by the the Ministry of Agriculture, Food and Rural Affairs and the Korean Food Promotion Institute. A total of 989 participants from about 70 different countries participated in the contest. Their participation brought in a high video submission that totals to 1,088.

In contrast, more winners were selected for the ‘2021 Korean Food Video Contest for Foreigners’ and the contest period was increased to one month accordingly. The prize money also doubled to USD 134,000 to fit its status for its second time running.

In addition, the contest was also promoted via online foreigner communities such as ‘KOREANERS’ and cultural centers of each country to increase the participation rate of the contest.

Under cookbang, which recorded about 70% of the video submissions, mainly featured Korean food such as kimchi stew and soybean paste stew or a fusion menu which uses Kimchi in the foreign food. Under mukbang, videos of diverse themes featuring Korean food like pork belly and kimchi stew that can be easily eaten overseas were submitted.