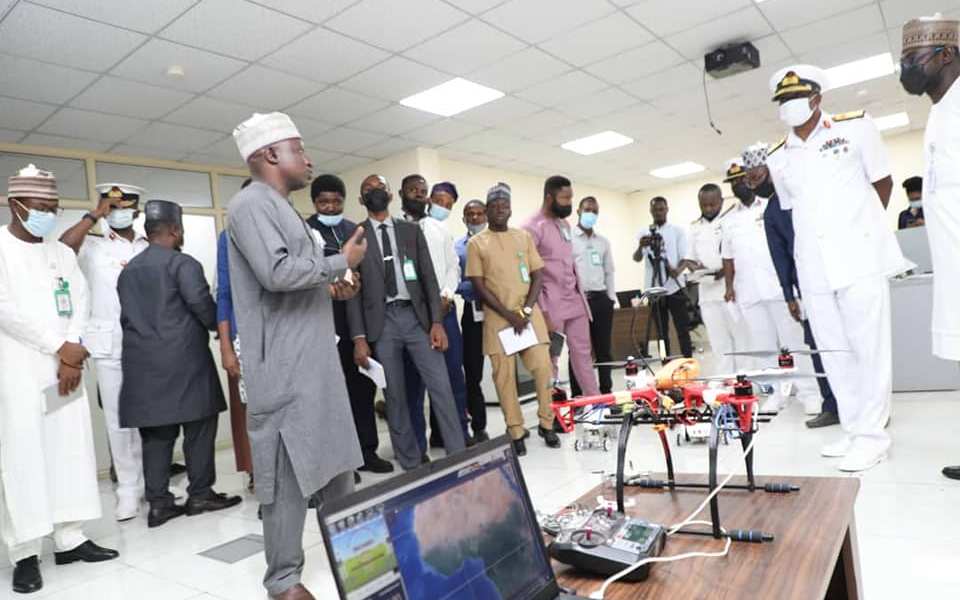 To build synergy in the area of research, development and Cybersecurity for the growth of the country, Engr. Garba Ya’u, the National Director, National Centre for Artificial Intelligence and Robotics (NCAIR), a subsidiary of National Information Technology Development Agency (NITDA), received in audience, Mougilim Nnamdi Anthony, the Chief of Space Administration, and his management team on a working visit to the Centre in Abuja.

Briefing the visitors about the Centre, Engr Ya’u said the initiative of the Centre came into lime light with the wisdom of the Honourable Minister of Communications and Digital Economy, Prof Isa Ali Pantami who observed that Artificial Intelligence, Robotics and other emerging technologies are now directing where the world is going”.

The National Director of NCAIR further stated that the Centre focuses on three (3) areas namely; Research and development for emerging technologies, capacity building and collaboration and partnerships for national interest thereby coming up with ideas that will impact the country positively, bringing about growth and development.

He further revealed that the Centre has some projects known as impact projects which are aimed at actualizing research through prototypes adding that “when desired results are attained, commercialization will be put into consideration towards the growth and development of the economy.”

Engr. Yau added that the Office of Nigerian Digital Innovation (ONDI) is another subsidiary of NITDA that helps in taking the desired ideas into impact through start-ups that can move the desired results for further commercialization which would  pave way for the creation of direct and indirect jobs and revenue flow to the country.

“NCAIR is working on a related product on health which is a platform both hard and software to allow the proliferation of telemedicine across remote and rural areas due to limited numbers of doctors in the healthcare sector for easy accessibility through online medium to boost the healthcare sector of the country,” he averred.

The Chief of Space Administration, in his earlier remarks appreciated the NCAIR for the various activities towards the swift growth of Information Technology across the country, he stated that more of such centres are need all over the country.

“We are being face with diverse problems across the country and one of the preferred solutions is the cutting edge technology which will aid curtailing such problems being face in the country, for growth and development, he revealed

He assured that the Defence space Administration would collaborate with NCAIR in the areas of research and development of space technologies, Cybersecurity for improved national security.

Mougilim further stated that his organization is into research in Cybersecurity and defence, rocketry, silage for rockets, Nano and cube satellites. “Our mandate is to launch cube satellites into space for swift communications and tracking to improve National security,” he added.

“We are building the capacity of our personnel through innovative venture used for tracking our troops at the theatre simply because our troops are the greatest valued assets we have to improve National security,” he said.