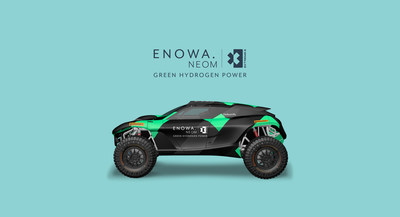 LONDON, June 30, 2022 /PRNewswire/ —  Extreme E announced today a multi-year relationship with ENOWA, NEOM’s energy, water and hydrogen subsidiary, to introduce green hydrogen power to their global sustainable racing series. The announcement comes just days after NEOM, a sustainable region in northwest Saudi Arabia being built from the ground up, was revealed as the title partner of the McLaren Formula E and Extreme E racing teams under the banner of ‘NEOM McLaren Electric Racing.’

ENOWA is the engine room for sustainable energy, water and hydrogen at NEOM. Green hydrogen is widely seen as the most promising green energy carrier for the future to fight climate change. This technology supports the transportation of renewable energy over long distances and the decarbonization of major industries and infrastructure.

Extreme E has become a role model to demonstrate the co-existence of motorsports, excitement and sustainability and an ambassador for our planet’s climatic hot spots through their dedicated race locations.

By partnering Extreme E and ENOWA aim to implement innovative green hydrogen-based technologies to not only power the championship towards a 100% “leave no trace” ambition but also to showcase the opportunities around this technology.  ENOWA will play an active part on the scientific advisory board of Extreme E and together ENOWA and Extreme E will develop educational programs intended to excite young generations about climate positive solutions.

Alejandro Agag, Founder and CEO of Extreme E, said: “We are delighted to have ENOWA onboard as our official Green Hydrogen Power Partner. We have collaborated with NEOM for some time, particularly in delivering a hugely successful first Desert X Prix of Season 2; this partnership with ENOWA marks a further step in our mission for a more sustainable future.”

“The work undertaken by ENOWA is extremely ambitious and an exciting prospect. NEOM, much like ourselves, pushes the boundaries of environmental sustainability and we are delighted to be partnering with ENOWA to go even further in our objective to raise awareness of the climate crisis.”

“ENOWA plans to lead the development of world-class, sustainable energy, water and hydrogen systems which I am sure will become a reference point in the future, and our series will also benefit from this greater focus on technology and innovation.”

Commenting on the relationship Peter Terium, CEO of ENOWA, added: “Business decisions in NEOM have sustainability at their core which is why we are delighted to partner with Extreme E.  Our partnership is aimed towards both creating visibility to the most urgent problems the planet is facing but at the same time demonstrating solutions that deliver meaningful impact. Together we can accelerate innovations in clean technologies powered by green hydrogen, contributing to hydrogen mobility markets and the future of global decarbonisation.”

NEOM is the first to produce green hydrogen at scale, paving the way for the hydrogen economy globally. Due to the abundance of solar, wind and water resources in NEOM, ENOWA and their partners will provide large quantities of green hydrogen that many industries can use. ENOWA benefits from NEOM’s greenfield site, which has no legacy infrastructure, to advance energy, water, and hydrogen innovation while providing sustainable fuels like green hydrogen to international users. It shares an ethos with Extreme E in its demands for a greater sustainability focus.

At the Season 2 opener of Extreme E in NEOM in February 2022, the series revealed its plans to launch an off-road hydrogen Championship in 2024. Named Extreme H, the championship will sit alongside Extreme E, its existing electric racing series, and will be a world-first for motorsport – further reiterating the commitment to showcasing the possibilities of new, sustainable technologies in the race to fight climate issues.

Development for the Extreme H vehicle is already underway, with the aim being the launch of a prototype in early 2023.

About NEOM: NEOM is an accelerator of human progress and a vision of what a New Future might look like. It is a region in northwest Saudi Arabia on the Red Sea being built from the ground up as a living laboratory – a place where entrepreneurship will chart the course for this New Future. It will be a destination and a home for people who dream big and want to be part of building a new model for exceptional livability, creating thriving businesses and reinventing environmental conservation.

NEOM will include hyperconnected, cognitive towns and cities, ports and enterprise zones, research centers, sports and entertainment venues and tourist destinations. As a hub for innovation, entrepreneurs, business leaders and companies will come to research, incubate and commercialize new technologies and enterprises in groundbreaking ways. Residents of NEOM will embody an international ethos and embrace a culture of exploration, risk-taking and diversity.

About ENOWA: ENOWA is a world-class energy, water and hydrogen company founded in NEOM, Saudi Arabia. ENOWA produces and delivers clean and sustainable resources for industrial and commercial applications using a customer-centric smart and connected system, designed to be circular and takes advantage of NEOM’s optimal solar and wind energy profile. ENOWA benefits from NEOM’s greenfield site, which has no legacy infrastructure, to advance Energy, Water, and Hydrogen innovation.

ENOWA will act as a catalyst and incubator for developing new, sustainable energy and water businesses while creating a robust economic sector regionally. Through its commitment to renewable energy and efficient water management, ENOWA seeks to become a global reference for industry leaders and setting a benchmark for sustainable economic circular systems around the world.

About Extreme E:  Now in its second season, Extreme E is a radical off-road racing series, founded by the same team behind Formula E, which showcases electric SUVs and futuristic technologies in some of the world’s most remote and challenging environments.

This five-event global voyage utilises its sporting platform for the purpose of promoting electrification, environment and equality. The series’ goal is to highlight the impact of climate change in some of the world’s most endangered environments, promote the adoption of electric vehicles to pave the way for a lower carbon future, and provide a world-first gender-equal motorsport platform.

The first sport to ever be built out of a social purpose, Extreme E aims to minimise environmental impact while maximising awareness, racing in places that have already been damaged or affected by climate change or human interference and taking fans deep into the heart of the most pressing issues facing our planet’s future.

Not only that, but Extreme E is also helping the car industry to develop future-facing technology using racing as a platform for road innovation, which accelerates change ten-fold.

This material is distributed by Teneo Strategy LLC on behalf of NEOM Company. Additional information is available at the Department of Justice, Washington, DC.