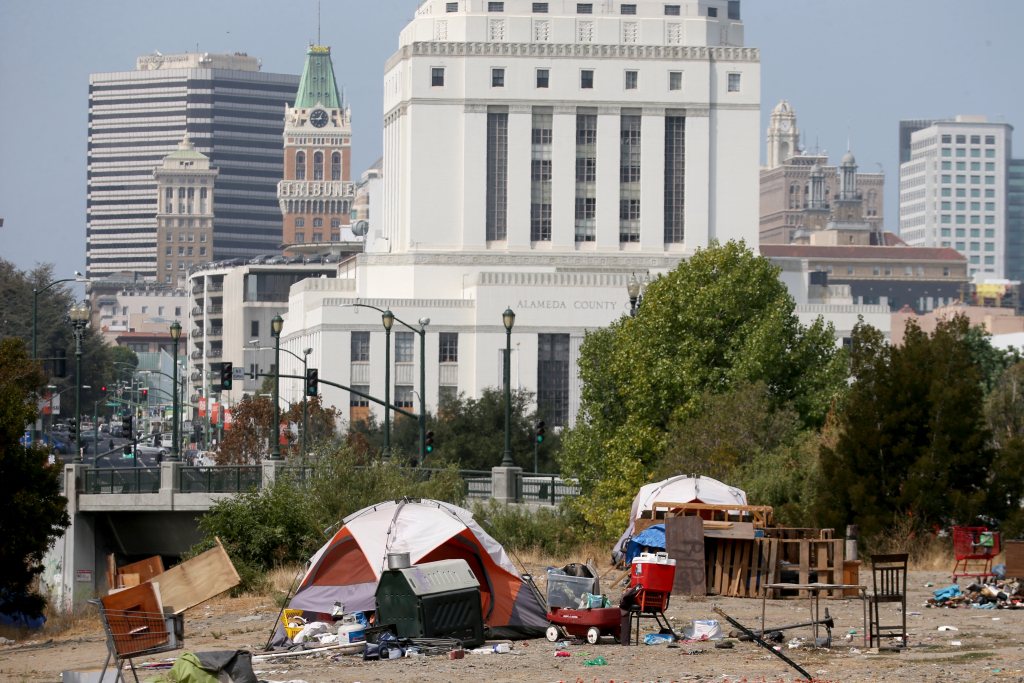 The number of unhoused people asking for help skyrocketed in some Bay Area counties during the pandemic, according to a first-in-the-nation data set released Wednesday.

The new online dashboard, which marks the first time anyone has broadly tracked the number of people seeking homeless services throughout an entire state, provides an early glimpse of how the pandemic has impacted the Bay Area’s most vulnerable residents.

In Alameda County, 9,008 people sought help last year — up 23% from the year before. In San Francisco, 10,634 people accessed services — up 40% from 2019. Santa Clara and Contra Costa counties saw more moderate increases of 9% and 6%, respectively. San Mateo County did not submit its data in time to be included in the platform’s launch.

“You can’t fix what you can’t measure,” Gov. Gavin Newsom wrote in a news release, “and having a statewide data system will help us determine what’s working and what isn’t, important insight we can use to create accountability and strengthen our response going forward.”

The new publicly available online portal, called the Homeless Data Integration System, paints a statewide picture of who is using homelessness services, and whether those services are helping them get housing. The data comes from California’s 44 individual “continuums of care” — county-based networks that administer homelessness services to their local residents, and include county, city and nonprofit stakeholders.

Last year, 248,130 unhoused people connected with service providers throughout California. Of those, 37%, or 91,626 people, had secured permanent housing by the end of the year — a number Deputy Secretary for Homelessness Ali Sutton called “really heartening.”

But 47% still were awaiting housing when 2020 ended, making it clear how much further the state has to go to make a dent in its homelessness crisis. And 16% had fallen off the grid entirely — they stopped interacting with service providers and the state lost track of them.

Newsom will be looking at those numbers when he revises his proposed budget next month, said Jason Elliott, senior counselor to the governor. Elliott is hopeful programs like Homekey — the state initiative that helps counties and cities turn hotels and other buildings into homeless housing — will help house that 47% of people who haven’t yet been helped.

But it offers a new, more all-encompassing look at one of the state’s biggest problems. And the data may be even more meaningful this year because many counties suspended their biannual homeless census — known as the “point in time count” — due to COVID-19 concerns.

Those counts tally the number of people outside or in shelters over a handful of nights in January, providing a snapshot of the crisis. In 2019, the last time most counties tallied people living on their streets as well as in their shelters, the state recorded a total of 151,278 people without housing.

To capture an even broader picture of the crisis, state officials hope eventually to expand the new data platform to include information about other social services, such as the state’s food stamps program, CalFresh.

“In Santa Clara County, we know firsthand the power of shared data in addressing our homelessness crisis,” Jennifer Loving, CEO of Destination: Home, wrote in a news release. “The Homeless Data Integration System will bolster our local efforts, improve our ability to collaborate across the Bay Area region, and help measure our collective statewide impact.”

The new data also shows how the need for help increased statewide during the COVID-19 pandemic, and how pop-up emergency shelters, hotel rooms and other solutions were deployed to fill the gaps. Emergency shelters served 118,499 people last year — up 12% from the year before.

And California ramped up efforts to prevent homelessness, including by providing short-term financial aid and other help. Last year, 32,189 people used those services — more than doubling the program’s reach since 2017.

Disputing the notion that unhoused people may go from county to county in search of services, 96% of people who accessed services last year did so in only one continuum of care.

The state spent $1.2 million on its new data platform, which was built in 15 weeks.

“For the first time, we will have the necessary data and tools to better coordinate statewide services,” Sutton wrote in the news release. “HDIS allows us to share best practices and lessons learned, and measure the impact of our collective efforts to prevent and end homelessness in California.”