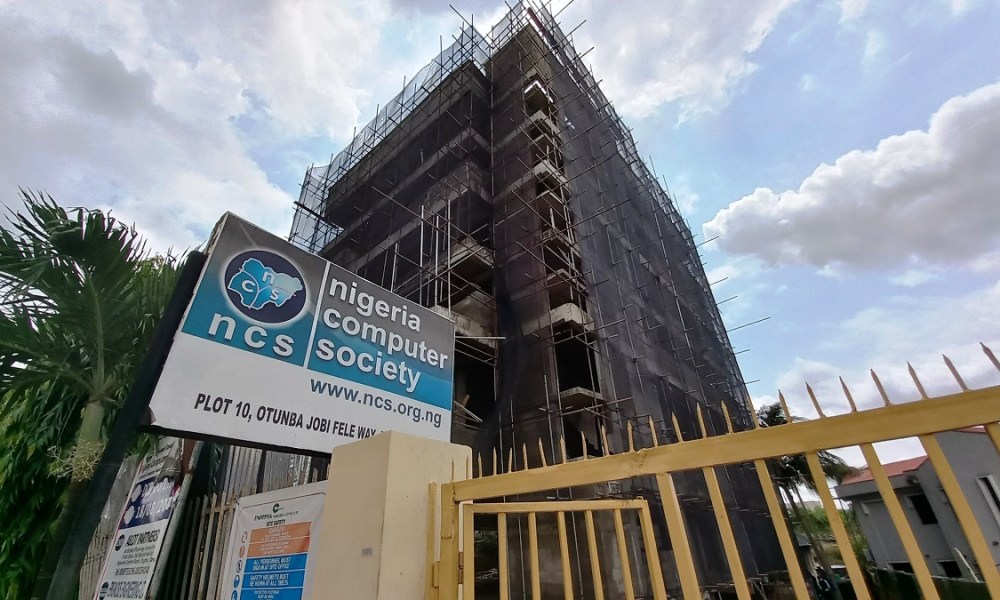 Nearly seven years after the historic ground-breaking for the construction of its national Secretariat in Lagos State, the Nigeria Computer Society (NCS) project has now reached 60% completion stage, TechEconomy.ng can report.

The Society has prudently spent 163 million naira on the project initially projected to gulp one billion naira.

inspection of the project by NCS President

Speaking to TechEconomy.ng during a tour of the building, Professor Adesina Sodiya, President of the Nigeria Computer Society (NCS), said apart from support worth about 30 million naira the Society received from the National Information Technology Development Agency (NITDA), the six-story building project, now roofed, has been pursued with funds from membership dues and other NCS activities.

The President who was companied Mr. Iyiola Ayoola, Executive Secretary of NCS, added that the initial projection for the project completion was 18 months, but has been slowed due to paucity of funds coupled with COVID-19 Pandemic has almost crippled global economy.

“We are glad that this project has reached advanced stage. Initially, the intention was to complete it within 18 months, but funding became an issue. You know, NCS bears the burden alone. Apart from support we received from NITDA worth about 30 million, we have not received donations from any other government or corporate entities. We are proud of members who have supported us through the payment of dues and other activities.

He said that the Nigeria Computer Society national secretariat project is iconic because of the need to have conducive environment for incubation of innovation for the development of the country’s budding digital economy.

He said that the centre was also designed to address the weak university-industry linkage.

Prof. Sodiya added that NCS has always sent out strong messages about its robust buy-in and optimal compliance with the digital transformation initiatives of President Muhammadu Buhari’s administration as reflected in Professor Isa Pantami, Minister of Communications and Digital Economy’s recent engagements with the Society.

A recent World Bank appraisal concludes that the weak university-industry linkage in Nigeria is the greatest impediment to the development of a knowledge-based economy and however recommends the prioritization of measures to develop structures and systems for strengthening university-industry linkage through establishment of at least six university based knowledge parks /technology innovation centres over the next six years.

Nigeria Computer Society (NCS) made history in December 2015 with groundbreaking for the construction of a befitting national secretariat, dubbed a technology innovation centre, in Lagos.
‎
Ground-breaking and stone laying for the edifice was performed by Mr. Adebayo Shittu, then Minister of Communications, under the leadership of Professor Sola Aderounmu as NCS President.

43-year-old Nigeria Computer Society is was formed in 1978 based on the vision and aspirations of the initial members and was initially called Computer Association of Nigeria (CAN).

The name was soon changed to COAN. COAN was established as the umbrella body of all IT professionals in Nigeria.

It was later changed to Nigeria Computer Society with the ammonization of 2005 involving ISPON, COAN, ITAN and ISPAN.

It has been growing and waxing stronger day by day and year by year with a lot of landmark and memorable achievements.

Since it was launched in 1978, NCS has laid a very solid foundation for the country to have the level of ICT awareness, use, applications and achievements we are witnessing today in all sectors of Nigerian economy and society.