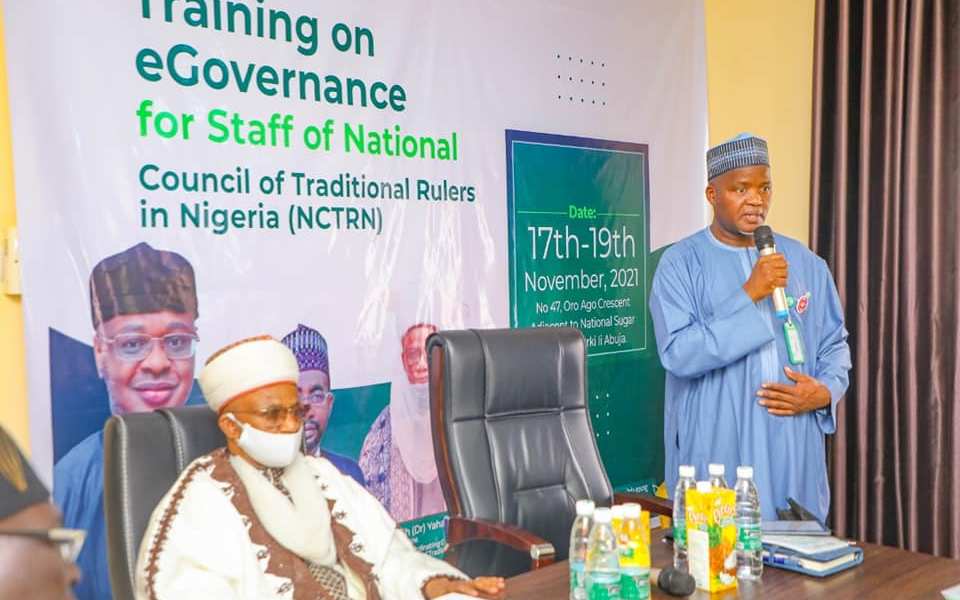 In recognition of the significant role of traditional institutions as custodians of cultural values in the country, the staff of the National Traditional Council for Traditional Rulers in Nigeria NTCRN were selected among the recent beneficiaries of NITDA’S capacity building on e-government.

Kashifu who was represented by Dr Usman Gambo Abdullahi, the director, Information Technology and Infrastructure Solutions of the Agency, noted that the e-government training was aimed at ensuring application of Technology in running government businesses especially in the Post COVID-19 era.

With this engagement of traditional institutions in the country, the impact of the National Digital Economy Policy and Strategy NDEPS had recorded yet another breakthrough in it’s quest to ensure a Digital Nigeria.

This feat was attained when the Federal Ministry of Communications and Digital Economy, through the National Information Technology Development Agency NITDA, resolved to strengthen the policy by engaging the administrators of traditional institutions in the country with digital technology as a platform for stimulating growth.

While highlighting the National Digital Economy Policy and Strategy Policy’s components, the Director General explained that NITDA has a Strategic Road Map which it has been implementing.

He added that in line with the National e-Government Master Plan for the country, a strategy to have institutional framework was designed to implement the NDEPS.

“As engine room for the implementation of government policies and programs, building the capabilities of government officials to deliver on your mandates should be a priority to any government”, he added.

He argued that as the apex body saddled with IT development and regulations, our ability to deliver on the Federal government Digital Economy mandate is our primary focus. “We recognize the fact that building your capabilities as traditional institution should be among our top priority.”

While further highlighting the benefits of the training to the staff of National Council for Traditional Rulers in Nigeria NTCRN, the Director General of NITDA described the role of Traditional institutions as critical to sustenance of any meaningful development in view of their closeness to the people at the grassroots.

“What the government is doing is to provide services to the people, and the best way to doing that is through the full engagement of traditional rulers,” he alluded.

He said the Participants, during the training, will be exposed to understanding how virtual platforms works and how to create Teams and Channels as well as how to set up Video Conferencing amongst many others.

Mallam Kashifu also hinted that the training will save participants from the vulnerabilities of online platforms as Nigeria is fast approaching the full attainment of Digital Economy, where the country must be on the Cyber Space with its associated myriads of challenges.

Alhaji Abubakar noted that the giant strides recorded in the sector demonstrates that the country will soon join the league of top economies of the world.

Kasim Yawa, the director, National Traditional Council for Traditional Rulers in Nigeria, express gratitude to the management of NITDA for acquitting them with rudiments of ICT and benefits derivable from digital economy.