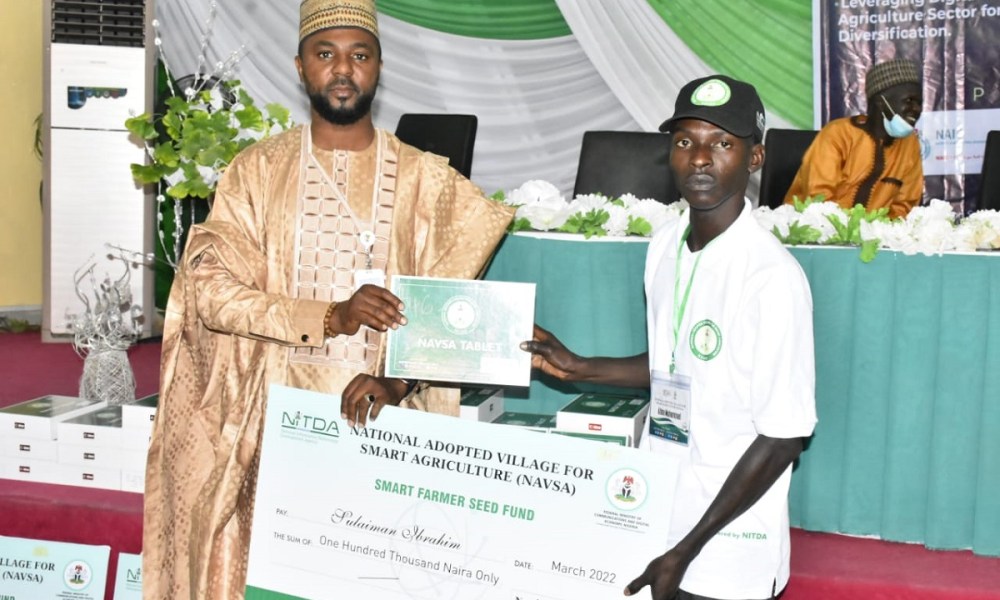 Kashifu Inuwa, NITDA’S Director General, made this known at the closing ceremony of the National Adopted Village for Smart Agriculture (NAVSA) at the Federal University Dutse (FUD) in Dutse.

“One of the critical sectors of the economy in Nigeria with a high potential for economic diversification is agriculture.

“The sector was reported to have contributed 26.84 per cent to overall GDP in real terms in Q4 2021.

“The sector grew by 3.58 per cent (year-on-year) in the same quarter,” the director general said through visual presentation at the closing..

The DG noted that an average Nigerian farmer still makes use of primitive farm tools like hoes, cutlass among others.

According to him, this constitutes a major setback to productivity, food security, and the contribution of agriculture to the economic growth of the country.

“Also, access to markets is one of the biggest challenges faced by smallholder farmers which directly affects their income and living standards.

“Lack of access to the market poses serious threats to farmers especially their inability to sell off their produce at good prices. Hence, this leads to massive post-harvest losses and food wastage,” he said.

The NITDA boss said NAVSA was designed to transform agricultural sector by deploying digital technology into farming activities in order to atract youngsters into farming business by using digital devices for maximum productivity and wealth creation.

“We hope to produce the next generation of agric enterprise millionaires. Second, this model supports continuous adoption of the next batch and generation of FPY students.

“The continuous adoption and sustainability of the model are premised on the design of the system that ensures continuous reinvestment of the current capital and 25 per cent profit at the end of each season by each adopted farmers or students.

‘In the next ten years in FUD, more than five thousand (5,000) students would have benefited with possibilities of an additional 500, 000 direct and indirect jobs.

“This is only in FUD. NAVSA will create win-win business models for ecosystem players with far-reaching network effects to create values that never existed before across the agriculture value chain.

“In the coming years, we would start integrating emerging technologies such as remote sensing, geospatial analysis, Artificial Intelligence, Big data analytics, blockchain among others to develop smart agriculture solutions, that create new business models and opportunities across the agric value chain for the ecosystem players.

This will, in no small measure, boost the economic diversification, growth, and prosperity of the country.

“NAVSA will make it possible to precisely capture data from individual farms and fields, combine it in macro-level data sets, and utilize those sets in increasingly cost-effective ways.

“Digital data in agriculture is potentially so transformative. It offers farmers access to tailored information and insights that allow individuals to optimise their production, gain access to appropriate products and services, and explore new linkages with markets.

“The use of technology to combat hunger and promote sustainable agriculture has profoundly received particular attention, perhaps more than any other development issue in the last two decades.

“Digital technologies and innovations are at the heart of managing the agriculture value chain from seedling to planting, produce monitoring to management, harvesting to processing, storage to marketing, and putting quality food on the table.

“What we have done is to rethink agriculture differently, by piloting digital technologies and innovations through a digital platform that woos and connects ecosystem players to make the journey of agribusiness seamless, productive, and efficient.

NAVSA connects ecosystem players across the agricultural value chain to position it as a business, attract youthful population into the agriculture enterprises and ensure there is a value addition to every farm produce for improved contribution to GDP and economic development.

“Since its launch, its implementation and sustainability models have continued to attract the attention of key players in the Agricultural ecosystem in line with global best practices.

“The untapped potentials of Nigerian farmers is currently being unfolded as the Federal Government through Ministry of Communications and Digital Economy NAVSA Smart agriculture to change the face of agric sector in the country.

“This year’s edition is presenting a green energy-powered smart brooding to improve the survival rate of broilers, a smart irrigation system to support a year-long production, and soil nutrient monitoring system to support information-driven farming on a demo land,” he explained.

Highlight of the five day event was the inspection of Smart Irrigation and Smart Brooding System donated by NITDA by the Acting Director Digital Economy Development Department of the agency Engineer Salisu Kaka alongside the Deputy Vice-Chancellor Academics Professor Abdulsalam Balarabe, Presentation of NAVSA tablet devices and One hundred thousand Naira Smart Farmers Seed Fund each to One hundred beneficiaries of Federal Government’s digital economy initiative.