Keynote speaker is British scientist Professor Stanley Whittingham, director of the Institute for Materials Research at the State University of New York at Binghamton. Whittingham was awarded the 2019 Nobel Prize in Chemistry alongside Akira Yoshino (Japan) and John B Goodenough (USA) “for the development of lithium-ion batteries.” Worldwide participants and speakers are government officials, NGO organizations, university professors, entrepreneurs.

Nobel Sustainability Trust Foundation awarded the medal for Outstanding Contribution in Sustainability. The two recipients, from Asia and North America, respectively, were Dr. Bruno Wu from Beijing, China, founder of the World Carbon Neutrality Council and Mr. Collin O´Mara of Reston, Virginia, USA, president and CEO of the National Wildlife Federation. This year’s awards medal and recognition letters were presented at the Paris Summit. Bertie Ahern, his is the co-chair of the Interaction Council of 40 Former Heads of State and Government and the former prime minister of Ireland sent his regards to summit and congratulations to the persons who got medal for Outstanding Contribution in Sustainability.

NST chairman Michael Nobel said the annual “The Sustainability Award” will focus on applied science and recognize outstanding sustainable development projects around the world, including in the fields of new energy, new materials, water, health, agriculture, IT and artificial intelligence.

The Nobel Sustainability Trust Foundation, founded by four members from Nobel family the previous name was ” Nobel Charity Trust” since 2007, and from 2022 changed to its present name in 2011 to more accurately represent its role and activities. The NST logo and The Sustainability Award are trademarked in the EU and worldwide. NST is independent of the Nobel Foundation which awards the Nobel prizes established by Alfred Nobel. NST reflects the wishes of the five Nobel family members currently serving as trustees to have a award which associated with their ancestors willingness to devoted to sustainable development. For more information, please visit www.nobelsustainability.org 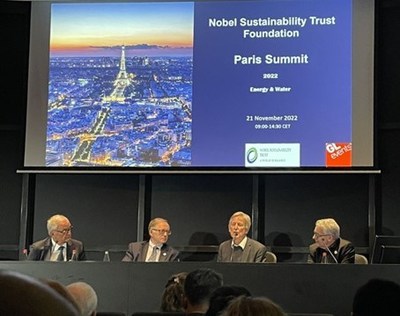