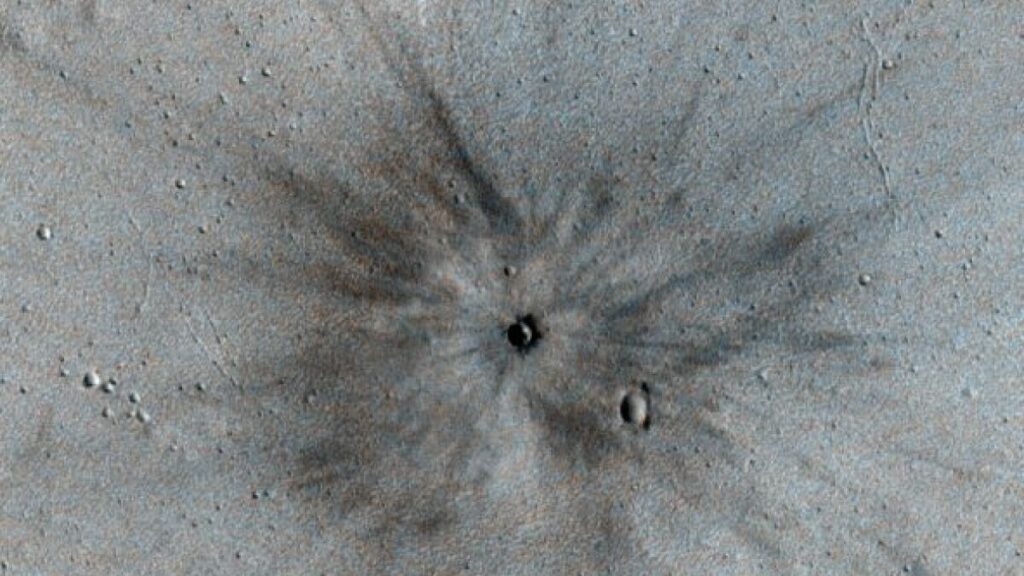 Object crashed into Mars and created this new impact crater

Our solar system is a dynamic, evolving realm of space.

A powerful camera aboard NASA’s Mars Reconnaissance Orbiter — a satellite orbiting the red planet — spotted a relatively recent impact site on the Martian surface. The spacecraft detected a dark spot on the ground, and then the high-resolution camera (called the High-Resolution Imaging Experiment) snapped the detailed shot.

The impact, which is brand new in cosmic terms, likely formed between February 2006 and March 2014, noted the imaging team at the University of Arizona. For a size reference, the entire black and white image is under five kilometers, or some 3 miles, across. Blasted-out rays of material are clearly visible around the crater, which formed from a falling asteroid or meteorite.

If a scary asteroid will actually strike Earth, here’s how you’ll know

Mars is absolutely covered in craters. NASA estimates there are over a quarter-million impact craters about the size of Arizona’s famous Barringer Crater, which is some 4,000 feet across. And there are over 43,000 Martian craters larger than three miles wide.

Meanwhile, Earth has just around 120 known impact craters. That’s because over hundreds of millions of years, different parts of Earth’s surface have both been covered in lava or recycled as the giant plates that compose Earth’s crust (tectonic plates) continually move rock below and back up to the surface. Mars isn’t nearly geologically dead — marsquakes frequently occur there — but it’s not nearly as active as Earth, a water-blanketed planet teeming with erupting volcanoes. On Mars today, there’s little to wash away, or cover up, new craters.

One of Mars’ most recent impact craters, then, might be visible for millions and millions of years.