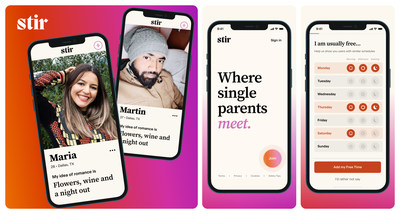 DALLAS, March 21, 2022 /PRNewswire/ — Today, Match, the company that pioneered the online dating industry, announces the official launch of Stir, its newest dating app designed to celebrate and connect single parents. Stir aims to provide community and connection to the 20M single parents in the U.S. that are oftentimes underserved on mainstream dating apps.

“Having kids shouldn’t be a dealbreaker when dating,” said Dinh Thi Bui, Vice President of New Verticals at Match Group. “We’re dedicated to giving single parents a dating experience where they are celebrated and feel like they can be themselves. With that, our hope is that they can truly focus on having a personal life beyond navigating parenthood.”

Finding a date night between two single-parent schedules can be challenging between kids’ activities and co-parenting arrangements. In fact, one in four single parents (27%) say coordinating schedules typically prevents them from going on dates. Exclusive to Stir, Stir Time is a scheduling feature where members can display their “me time” with matches to make it easier for them to coordinate calendars.

Dating as a Single Parent Today

New data from 1,494 Stir members reveals what single parents are really looking for when seeking a dating partner and the challenges that they face dating with kids. Key insights include:

Download Stir today for free on the iOS App Store and Google Play.

Stir is the new dating app designed to celebrate and connect single parents. Stir is available on the iOS App Store and Google Play. For more information visit www.stir.com.