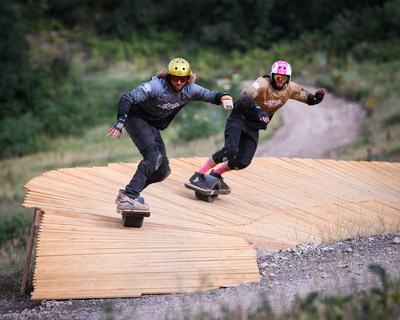 Streaming live on YouTube, the best 28 riders in the world take to steep ski slopes and
compete for the crown of World Champion and a $10,000 prize purse.

RENO, Nev., Aug. 18, 2022 /PRNewswire/ — Future Motion, maker of the popular Onewheel GT and Pint X electric boards, will host its biggest and most ambitious Championship competition to date, The Race for the Rail World Championships at Sky Tavern Resort August 20th and 21st. The world’s best Onewheel riders will compete against one another in a boarder-cross style competition down steep, technical trails and over demanding natural and man-made features that include an epic ‘truck jump’.

Viewers can stream the Women’s and Men’s races live on Onewheel’s YouTube channel August 20th and 21st at 4pm PT. The broadcast is professionally produced by Transition Productions, presenter of the World Surf League and the Dew Tour events.

Over 400 riders competed for a spot in the event at Western and Eastern Qualifier events earlier this summer. Now, the field of riders at the Race for the Rail has been narrowed down to just 28 riders. Races will be paired in brackets and will race boarder-cross style down challenging off-road tracks that include tight turns, drops, and even a feature built over a truck at Sky Tavern Ski Area in Reno, NV.

“This is must-watch programming,” commented Onewheel’s Chief Evangelist, Jack Mudd. “Onewheel is the fastest growing boardsport and these riders are constantly taking it to the next level. This year’s course is absolutely insane and there are going to be some serious fireworks in the coolest sporting event you’ve probably never heard of.”

Founded in 2013, Future Motion is committed to designing and developing inspiring vehicles that include both elegant form and unprecedented function. Future Motion’s products, Onewheel Pint and Onewheel+ XR, exemplify its dedication to crafting products that bridge recreation and transportation. Future Motion designs not only the Onewheel product line but also all the subsystems that power it, including custom brushless motors, power electronics and battery modules. Onewheel, which provides a riding experience similar to surfing but on paved or unpaved trails, is perfectly situated in Santa Cruz where the mountains meet the sea. Its products are protected by over 37 issued patents in the U.S. and worldwide.