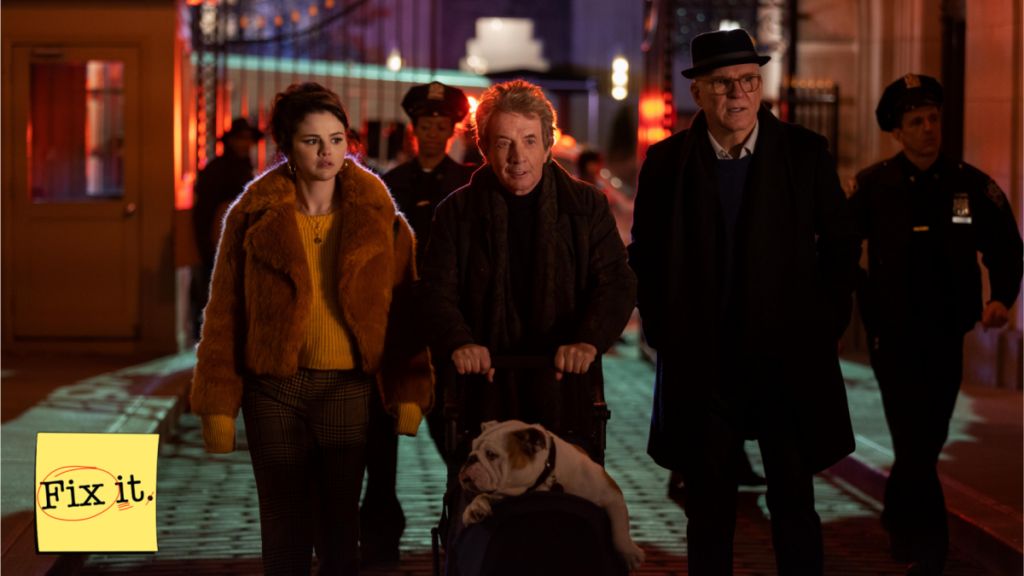 Welcome to Fix It, our series examining projects we love — save for one tiny change we wish we could make.

A killer comedy series starring Steve Martin, Martin Short, and Selena Gomez, Only Murders in the Building is one of the best TV shows of the year. It’s a near-perfect dive into true crime, podcasting, and the mysteries of apartment living. Plus, its central trio’s chemistry is undeniable. However, I say “near-perfect” because there’s one thing that’s still bugging me: the show’s beginning.

Only Murders in the Building opens with a flash-forward. Police scour the halls of the Arconia apartment building. Charles (Martin) and Oliver (Short) scramble to leave, stopping to grab Mabel (Gomez) on their way downstairs. Reaching her apartment, they find her kneeling in front of a body, drenched in blood. “It’s not what you think,” she tells them. Then, the show cuts to two months earlier, right before the murder of Tim Kono (Julian Cihi), when the story begins in earnest.

A potential murder by one of of the show’s protagonists — Gomez, no less! — is an excellent way to start things off with a bang. However, as I watched the Season 1 finale, that initial excitement fizzled into frustration. All season long, I had been dying to understand what went down in that very first scene. Whose body was in Mabel’s apartment? Who was the murderer? Why had they framed Mabel? What was really going on?

How was “Only Murders In The Building” going to successfully deliver on the promise of its first big mystery in just three minutes?
Turns out, it wouldn’t.

The minutes of the finale ticked by. Charles, Oliver, and Mabel discovered that Jan (Amy Ryan) had killed Tim. They turned her in, then celebrated the successful end of their podcast on the roof of the Arconia. When Mabel headed back down to her apartment, I realized that we were finally going to get to the bottom of that opening sequence.

The problem: There were only three minutes left in the season. How was Only Murders in the Building going to successfully deliver on the promise of its first big mystery in just three minutes? Turns out, it wouldn’t. Only one of my questions was answered. (Who died? Bunny.) The rest were bundled up into a cop car alongside Charles, Oliver, and Mabel, presumably to be answered in Season 2.

My problem lies not with this cliffhanger of an ending — it’s a clever way to generate intrigue and demand for a second season — but with the fact that Only Murders in the Building used a teaser for Season 2 to open its first season.

When you open a show or a movie with a flash-forward, you’re entering into a contract with the audience that your story will eventually arrive at the flash-forward and give it the appropriate context. Only Murders in the Building only partially fulfills this contract. Yes, we now know that Bunny is dead, and we do get context about who she is and why someone would frame Mabel. But everything else is left unknown.

These three are interesting enough without an action-heavy flash-forward.
Credit: Craig Blankenhorn/Hulu

Consider another 2021 debut series that opened with a flash-forward: The White Lotus. The show’s opening minutes reveal that someone will die at the titular resort. This creates a sense of dread that grows as the season goes on, as well as a curiosity about the victim’s identity. In that show, all our questions are answered by the time the season ends.

The White Lotus’ flash-forward also primes us for the extreme drama to come. Without it, the death in the finale may have seemed ridiculous and out of place. For that death to work, it needed to be inevitable, not totally unexpected.

Only Murders in the Building needed the opposite: Bunny’s murder should have been unexpected. Instead, it felt inevitable. Imagine how surprising her death and Mabel’s framing would have been if we hadn’t known this twist was coming right from episode 1. The finale would have lured us into a false sense of comfort at our leads’ victory, then launched us right into the shock of their arrest. Unfortunately, the flash-forward dilutes this shock and the impact of the finale’s last moments.

To make matters worse, Only Murders in the Building features another, better flash-forward at the end of its fourth episode, “The Sting.” Podcaster Cinda Canning (Tina Fey) teases an upcoming podcast about the Arconia, titled Only Murderers in the Building. It’s deliciously vague, but the payoff in the finale is more than satisfying. Not only do we understand why Cinda is making this podcast, but also we get a gag about her stealing the podcast’s excellent title from her assistant, who definitely deserves better. The fact that the murder-mystery show proves that it can do flash-forwards well and then includes a weak one to open its season is nothing short of frustrating.

My annoyance at this particular flash-forward extends to most flash-forwards in general. They run the risk of being gimmicky when executed poorly. With a flash-forward, a show or movie introduces the audience to a massive plot point — often its flashiest — in order to reel them in, then rewinds and introduces the meat of the story. It’s basically a way of saying, “My story might not seem that interesting now, but look where it ends up! You’ll just have to stick with me.”Only Murders in the Building doesn’t need to do that, because it’s interesting right from the moment it introduces its central trio strolling through New York City.

It’s a shame that it opens with an action-packed flash-forward instead of building to its thrills organically. After all, Only Murders in the Building is blessed with strong characters, performances, and comedy. Plus, there’s already a murder in the first episode. That should be more than enough to pique anyone’s interest.

Only Murders in the Building is streaming on Hulu.