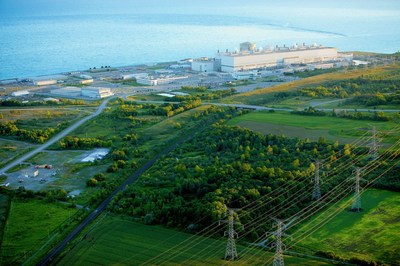 CLARINGTON, ON, Aug. 17, 2022 /CNW/ – New nuclear technology to help meet growing electricity demand and achieve net-zero emissions targets is progressing in both Canada and the United States, thanks in part to a collaboration between two of North America’s leading generators, Ontario Power Generation (OPG) and the Tennessee Valley Authority (TVA).

New nuclear generation, including SMRs, is an essential part of the electricity mix to help decarbonize the energy sector on both sides of the border. The safe, carbon-free, reliable supply of electricity from nuclear power is especially necessary as electricity demands increase due to electrification of higher-emitting sectors, including transportation.

OPG is deploying an SMR at its Darlington site, the only location in Canada licensed for new nuclear construction with an approved Environmental Assessment. OPG recently announced a contract with ES Fox to proceed with early site work, including water, electrical power, information technology, and roads. The work will begin when necessary permits and regulatory approvals are in place.

The two companies agreed earlier this year to work together to mitigate the financial risk that comes with development of innovative technology, as well as future deployment costs.

“Reaching net zero will require all the tools in the toolbox – and that includes safe, carbon-free nuclear power,” said OPG President and CEO Ken Hartwick. “Working together, OPG and TVA are demonstrating environmental leadership while leveraging our extensive expertise in safely producing the electricity needed in our jurisdictions to advance new nuclear technology and cleanly power the future.”

“At TVA, we believe advanced nuclear technologies will play a critical role in our nation’s drive toward a cleaner energy future,” said TVA President and CEO Jeff Lyash. “Canada and the U.S. have a rich history of partnership for the greater good. Today, we have an opportunity to build on that partnership and make nuclear energy an impactful contributor to a carbon-free energy future for all of North America.”

“Ontario is a trusted leader in nuclear expertise internationally, and with new nuclear technologies − like SMRs − we’re leveraging our first mover status to build economic and environmental opportunities for our province, our country and the world,” said Todd Smith, Ontario Minister of Energy. “It’s clear that there is no path to a clean energy future without nuclear. I applaud OPG and TVA for continuing to collaborate and lead the way in their efforts to keep the electricity system clean, reliable and affordable.”

As a global climate change leader and the largest, most diverse electricity generator in the province, OPG and its family of companies are helping lead the charge to a post-carbon economy.

The Tennessee Valley Authority is a corporate agency of the United States that provides electricity for business customers and local power companies serving nearly 10 million people in parts of seven southeastern states. TVA receives no taxpayer funding, deriving virtually all of its revenues from sales of electricity. In addition to operating and investing its revenues in its electric system, TVA provides flood control, navigation and land management for the Tennessee River system, and assists local power companies and state and local governments with economic development and job creation.