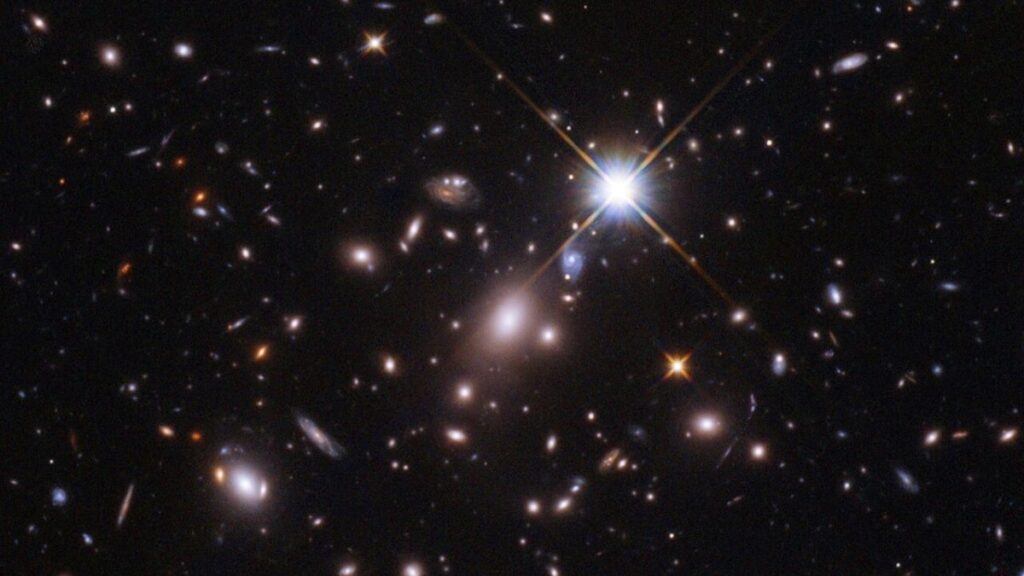 Overachieving Hubble telescope glimpses the most distant star ever seen

Hubble just looked back a whopping 12.9 billion years in time.

The legendary space telescope captured light from the most distant individual star humanity has ever seen. Hubble’s observation smashes the previous record by around 4 billion years. The European Space Agency (ESA), which runs the telescope with NASA, announced the record-breaking observation on March 30.

The star is highly “red-shifted,” meaning this ancient light has been stretched as it travels away from us in the ever-expanding universe. To us Earthlings, such warped and stretched light appears in red, which is the longest wavelength of visible light.

“We almost didn’t believe it at first, it was so much farther than the previous most distant, highest redshift star,” Brian Welch, an astronomer at Johns Hopkins University, said in a statement. Welch led the research about the detection, which was also published in the science journal Nature.

The now-famous star, dubbed “Earendel” for “morning star” in Old English, is shown by the arrow in the zoomed-in Hubble image below.

How Hubble saw such a profoundly distant star

It’s near impossible for our space telescopes to currently detect a single star in the deep, deep, deep cosmos. (Even stars like Earendel, which are 50 times more massive than the sun and millions of times brighter.)

“Normally at these distances, entire galaxies look like small smudges, the light from millions of stars blending together,” Welch explained.

Yet a trick of the cosmos magnified Earendel, making it visible.

Massive objects in the universe warp space, somewhat like a bowling ball sitting atop a mattress. In this case, a cluster of galaxies (WHL0137-08) exists between Earth and the extremely distant star Earendel. The galaxies have warped the fabric of space, and in doing so, created a “powerful natural magnifying glass that distorts and greatly amplifies the light from distant objects behind it,” the ESA said.

Earendel happens to be located on or near a “ripple” created in space, which ultimately made such potent magnification. “The effect is analogous to the rippled surface of a swimming pool creating patterns of bright light on the bottom of the pool on a sunny day,” the ESA explained. “The ripples on the surface act as lenses and focus sunlight to maximum brightness on the pool floor.”

The Hubble Telescope, orbiting some 340 miles above Earth, continues to make unprecedented observations more than 30 years after it started peering at the cosmos. A brand new observatory, the powerful James Webb Space Telescope, has now joined Hubble in space. Webb will soon begin its observations, peering at the earliest galaxies ever formed as well as mysterious planets in our own Milky Way.