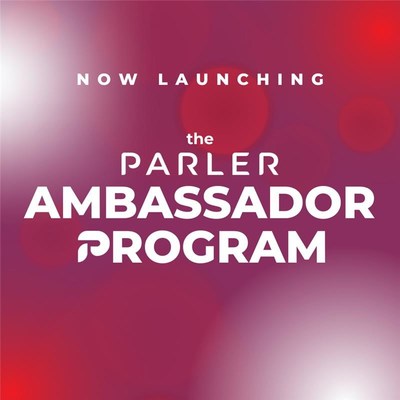 NASHVILLE, Tenn., Aug. 25, 2022 /PRNewswire/ — Parler, the growing destination for uncancelable content creators, commentators, and communities, today announced the launch of its Ambassador Program. The program will amplify the voices of younger influential creators while expanding Parler’s mission and momentum both on and off the social platform.

“Parler recognizes the value and power of working closely with budding creators,” said Parler CEO George Farmer. “We’re committed to amplifying younger voices and giving them a home where they can speak without fear of censorship or suspension.”

Selected ambassadors will be social and cultural influencers known for unique content, opinion, and perspective who appeal to broader audiences. Ambassadors may also be chosen for their innovation and impact within the Web3 and NFT/crypto space, in addition to champions of Free Speech and ideas.

Parler continues to attract some of the world’s most prominent creators. Most recently, the app has featured:

“We’re thrilled to launch Parler’s Ambassador Program to provide a content-rich environment for younger influencers and their peers — a place where they can freely express their beliefs without fear of being canceled,” said Christina Cravens, Parler’s Chief Marketing Officer.

Creators interested in joining the Parler Ambassador Program can learn more at discover.parler.com/ambassadors.

About Parler Inc.: Parler has a bold vision to make freedom of expression, security, and privacy a reality through social media and blockchain technology. Over 16 million users have chosen Parler as their social media platform to protect against the authoritarian powers of Big Tech, Big Government, and cancel culture. Parler uses the First Amendment of the U.S. Constitution as a guide, making it possible for people to speak freely without fear of being suspended or labeled ‘dangerous’ and banned. Parler is the public town hall where everyone is welcome, and civil debate is encouraged around diverse topics. Founded in 2018, Parler is based in Nashville, TN, and has a growing global community of content creators. To learn more, visit https://parler.com or download on the iOS App Store now.