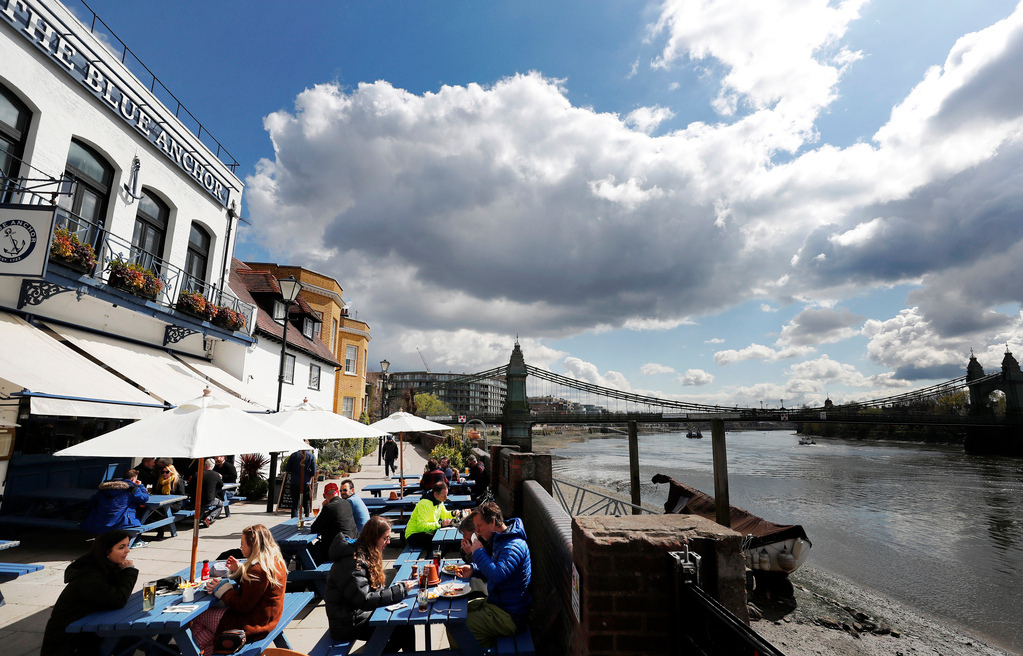 LONDON — People across Britain flocked to shed shaggy locks and browse for clothes, books and other “non-essential” items as shops, gyms, hairdressers, restaurant patios and beer gardens reopened Monday after months of lockdown.

British Prime Minister Boris Johnson urged people to “behave responsibly” as the country that has had Europe’s deadliest coronavirus outbreak took a big step on its roadmap toward a resumption of normal life.

Monday brought the easing of restrictions that have been in place in England since early January to suppress a surge in infections linked to a more transmissible new virus variant first identified in the southeast of the country.

Long lines formed outside some stores, including a branch of Nike Town on London’s busy Oxford Street, and pubs and restaurants with outdoor space reported a flood of bookings.

Helen Dickinson, chief executive of the British Retail Consortium, said businesses that have endured months of enforced closure were “excited and desperate” to welcome customers back. At a hairdresser in Birmingham, customer Amy Smith said she was thrilled to be getting a trim at last.

“It’s great to be here, I’ve been going with this weird little topknot for a few months now,” she said. “I’m going to a go to a beer garden experience later, so it’s going to be good.”

Many people were planning outdoor meals and drinks, despite unseasonably cold weather that brought springtime snow flurries to many areas — including, briefly, London.

Emma McClarkin, chief executive of the British Beer & Pub Association, said Monday’s opening for outdoor service was “a first small step in a very long journey to recovery” for the “Great British pub.”

Across the country, hardy pub-goers ordered pints on patios and in beer gardens despite the chilly weather.

“Absolutely delicious,” said Pippa Ingram, as she tasted her first drink alongside a hot breakfast at the Royal Victoria Pavilion pub in the seaside town of Ramsgate, southeast England. “That is banging,” she said appreciatively.

Britain has had Europe’s worst coronavirus outbreak, with more than 127,000 confirmed deaths.

Infections, hospitalizations and deaths have all fallen thanks to the lockdown, and a mass vaccination program that has given at least one dose to more than 60% of the adult population.

The situation in Britain stands in contrast to many of its neighbors, including France, where new lockdowns have been introduced to combat surging infections and deaths.

Johnson and epidemiologists have urged caution, saying that many people remain unvaccinated and relaxing social distancing rules or allowing foreign holidays this summer could bring a new spike in infections.

Indoor drinking and dining won’t be allowed in England until May 17 at the earliest, and theaters, cinemas, nightclubs and most other venues remain closed, while indoor socializing is tightly restricted and foreign holidays remain banned.

The prime minister had promised to visit a pub for a pint to mark the occasion, but postponed the celebratory drink after the death of Prince Philip, husband of Queen Elizabeth II, on Friday at age 99.