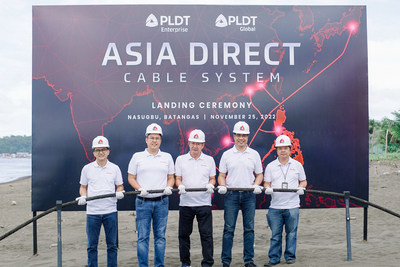 “We are grateful to the local government of Batangas for working with us to land another subsea cable system that will not only cement Batangas’ position as a crucial landing point of global data in the Philippines but more so propel the country’s digitalization. We remain resolute to our commitment to building the country’s hyperscale ecosystem that will further the country’s position as the next digital destination in Asia Pacific,” shared Gendrano during the inauguration event.

Once completed, ADC will boost the PLDT Group’s already unmatched international capacity by up to 36 Terabits per second (Tbps), bringing it to nearly 100 Tbps by end-2023. Commencing in the Philippines, the second stage of the marine installation will continue to further link six other international cable landing points in Asia including Tuas, Singapore; Chung Hom Kok, Hong Kong; Quy Nhon, Vietnam; Sri Racha, Thailand; and Shantou, China. The marine installation of the trunk segment to Maruyama, Japan was completed during the first stage of the marine works.

Once ADC is completed and put in service by end-2023, PLDT’s Batangas cable landing station will host a total of three international subsea cable systems. It currently hosts SEA-ME-WE3 cable that goes to South Asia, the Middle East and Western Europe, as well as the regional Asia Pacific Cable Network Number 2.

PLDT Batangas Cable Station remains one of the vital landing termination hubs for global connectivity in the Philippines, being PLDT’s longest continuously operating cable station, and the station closest to the National Capital Region, which is the country’s primary engine for economic growth and digital transformation. The facility is globally-certified holding an ISO 22301 Business Continuity Management System (BCMS) certification for seven consecutive years. PLDT’s cable landing stations across the Philippines are directly connected to VITRO Makati2, the upcoming VITRO Sta. Rosa and the rest of PLDT’s network of data centers, delivering massive global data to hosted enterprises and hyperscalers.

PLDT has invested over ₱518.5 billion in total capex over the last ten years, significantly expanding its data center sites to 11 and its total fiber footprint to about 1,091,000 kilometers as of end-September.