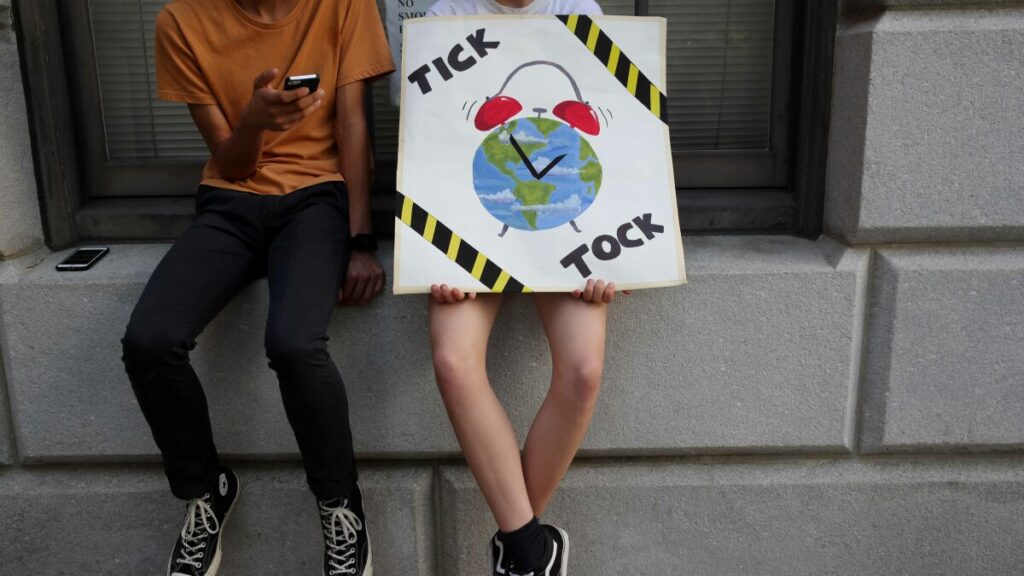 Politics is a huge stressor for some young people. That’s a big problem.

It’s no secret that politics can make people miserable.

At its worst, national politics in the U.S. amounts to watching highly-paid elected officials fight over slivers of power while they get little done for the people they represent. Toss in the breathless media coverage over who’s “winning,” the insults traded between politicians and partisans on social media, and the alarming right-wing drift toward authoritarianism, and the whole project of American democracy feels rather hopeless sometimes.

A study published recently in PLoS One indeed found that politics was a chronic stressor for millions of Americans during the Trump administration. Thanks to politics, people said they slept less, experienced more stress, anxiety, and depression, and even had more frequent thoughts of suicide. The finding echoes other survey results from the same era in which participants reported that politics negatively affected their mental health. Additionally, some participants in the PLoS One study said politics led them to post things online they later regretted, created problems in their relationships, and led to compulsively thinking or talking about politics.

The study also suggests that not everyone who feels the toll suffers equally. Those who experienced the worst effects were consistently younger, identified with the Democratic party, actively engaged in politics, disdained political opponents, and had lower levels of political knowledge. Those variables independently predicted who reported poorer mental health, meaning some respondents may have expressed one or two traits while others expressed all of them. This pattern emerged in three separate surveys from just after Trump’s inauguration to weeks after his defeat in the 2020 election.

The startling finding raises a question that urgently needs answers: What happens when, in particular, young people and those actively engaged in politics feel that American democracy harms their well-being or mental health? And why do these traits, in addition to disdain, lower political knowledge, and identifying with the Democratic party, predict who reports worse mental health?

The author, Kevin B. Smith, a political scientist at University of Nebraska-Lincoln, can only speculate for now.

Smith does acknowledge that people’s emotional and psychological distress makes sense in a political environment that’s divisive and polarized, with an element of “despair.” But he’s troubled by the conundrum that presents.

“For democracy to function, or at least function well, you want informed and engaged citizens,” says Smith. “But if doing that leads you to be stressed and fatigued and costs you friendships and leads you into compulsive behaviors you later regret, that doesn’t seem like a particularly healthy thing to do.”

When faced with something we know makes us sick, say like a novel virus, a typical approach is to minimize exposure to that risk. But if young people specifically feel they must withdraw from politics to preserve their well-being, we stand to lose the clarity and conviction many of them bring to solving our most pressing problems, like gun violence and climate change.

At the same time, they’re bearing the brunt of the failure to meaningfully tackle these crises. They will inherit a country and planet that, in many ways, the adults in the proverbial room have neglected. The so-called fragility of Generation Z and Millennials is often a punchline, but their frequent insistence on both justice and comfort is unsurprising.

Zhang, who is 19, notes that his generation grew up in the shadow of Sept. 11, with constant worry about school shootings. He says young adults are tired of facing crises that leaders refuse to solve. That sentiment is showing up in polling. Despite their high voter participation in the last presidential election, young Americans seem to be losing confidence in the state of American democracy, according to the most recent Harvard Youth Poll of 18-to-29-year-olds. Only 7 percent of respondents viewed the U.S. as a healthy democracy and 13 percent agreed that it’s a “failed democracy.” We should be worried that such dismay may make authoritarianism more appealing to young people who feel that American democracy costs them much more than it’s worth. The Harvard Youth Poll also found that a quarter of politically engaged youth reported that politics had a negative affect on their mental health.

Despite these alarming signals, there are signs of hope. The spring 2021 Harvard Youth Poll found that young people were more likely to be politically engaged than a decade ago. Now the challenge is to deliver on the promise of their involvement so they don’t abandon American democracy. Smith’s findings suggested that knowledge of how the political system works protects against negative mental health effects. While the study didn’t answer why, it’s possible such knowledge leads to less disappointment or better prepares people for legislative setbacks. Yet Zhang believes something else matters a great deal, too.

“One of the most important parts of making politics into a more positive force in young people’s lives is to make them feel empowered in politics,” he says.

That means holding roles as voters and elected officials. It also means lawmakers listening to young people and integrating their feedback in decision-making so they can see that their actions have tangible political consequences.

“I think it really falls to our generation and those in power to make sure that young people have the opportunities for political engagement [and] political empowerment in order to make their own mark on politics,” says Zhang.

Related Video: 6 podcasts about mental health you should be listening to