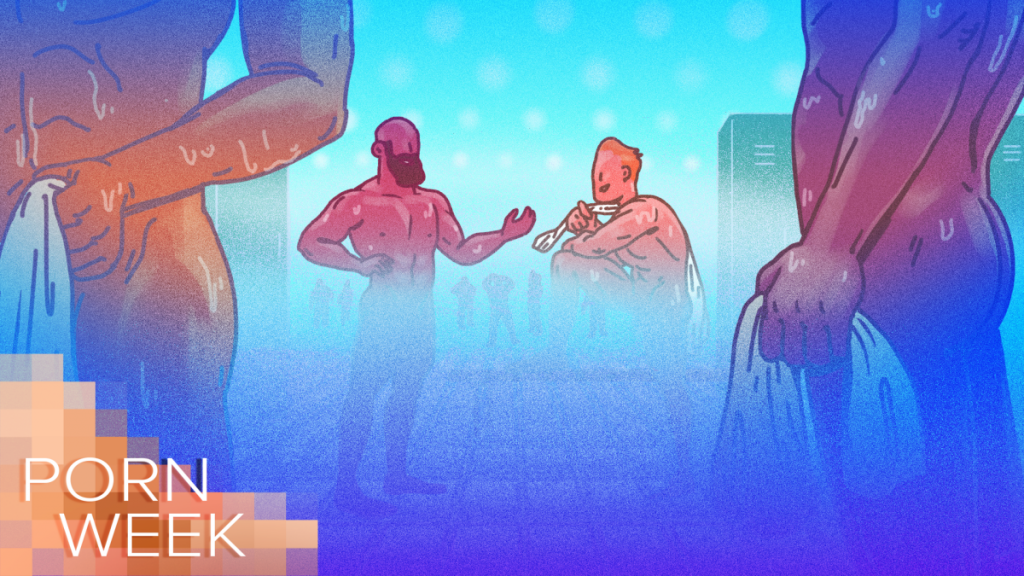 While full-frontal female nudity has long been the “norm” in sex scenes both in film and TV, this newer proliferation of full-frontal male nude scenes in episodic content may be because it’s not shocking to see dicks on our screens anymore.

Recent submissions to Sssh are heavily swayed by television, Rowntree said. Witches (after Sabrina the Teenage Witch and The Magicians) and superheroes (no doubt based on the Marvel Cinematic Universe and other comic book hero resurrections) are among them.

Rowntree also acknowledges the adult industry’s influence on television making. She herself, as a part of Sssh, has shot content for a couple other mainstream TV productions (but couldn’t elaborate due to legal reasons).

Why big-budget TV is sexier than Blockbuster movies

This convergence has influenced prestige TV more so than Blockbuster films, said Maria San Filippo, professor of visual and media arts at Emerson College and author of Provocauteurs and Provocations: Screening Sex in 21st Century Media.

“As a means of brand differentiation, TV has taken up the sex that Hollywood has increasingly distanced itself from,” said San Filippo, referring to Tinseltown’s filmmakers.

Whereas the most popular, chatted-about TV shows (such as Game of Thrones) often portray sex, buzzy movies tend to be more prudish. The world of big-budget films has had an explosion of intellectual property franchises, such as Marvel movies. These stories are sexless and family friendly, San Filippo explained.

That’s not to say there aren’t plenty of titillating R-rated movies released year after year. Blockbusters, however, don’t tend to touch the adult topics that prestige TV is willing to go after.

When the “golden age of television” (considered, by some critics, to be 2000-2019) took off, it gave us a hunger for prestige shows that pushed boundaries and sometimes felt like episodic movies. Streaming services have also taken off in parallel, leading to even more content being produced and a greater willingness to test out new concepts.

The rise of prosthetics and intimacy coordinators

Two other factors that have contributed to the “latest burst” of male nudity on television include the improvements in prosthetics (and digital alterations) and the rise of intimacy coordinators, said Peter Lehman, professor emeritus at Arizona State University and author of Running Scared: Masculinity and the Representation of the Male Body.

Many of the dicks we see on our 4K televisions are fake, he wrote for The Conversation. HBO has a long history of displaying naked penises, such as in the 1990s show Oz. The difference between Oz and, say, Euphoria, which stirred up dick discourse in 2019, is that the dicks in the latter are prosthetics. The penis tide changed from real to artificial with the 2010 Starz series Spartacus, Lehman said.

Why? Because prosthetics allow filmmakers and actors to decide how they want characters’ dicks to look, namely: huge.

Meanwhile, the use of intimacy coordinators became common practice on set of film and TV productions around 2018 in light of the #MeToo movement and more people speaking out about sexual harassment. Intimacy coordinators choreograph simulated sex scenes, negotiate and communicate between actors and production teams, and provide a sense of safety and support for actors.

Porn’s influence on storylines and characters

Even when a show’s subject isn’t the adult industry, though, it may still be informed by it in subtler ways.

“In this and other scenes of characters’ sexual role-play,” San Filippo wrote in Provocauteurs and Provocations, “Girls mocks porn’s ludicrous scenarios” and winks at the cognitive dissonance of being both attracted and disgusted by these scenarios.

“As soon as they [TV shows] become explicit, where does that leave the adult industry?” she asked. “Or will they have their place, and we’ll have our place?”

As exemplified by OnlyFans banning explicit content only to suspend the change days later, the adage of “sex sells” often stops when the selling benefits sex workers. Sex work is devalued across industries such as entertainment and tech, even though these industries profit off it. San Filippo hopes that meshing television, an industry largely impacted by labor organizing, with the adult industry could result in better labor practices for the latter.

Lehman sees future potential not just for prosthetics, but digital enhancements. In the 2013 Danish film Nymphomaniac, for example, the director digitally manipulated actors’ faces onto other people’s naked bodies.

Particularly, Lehman said, outside the framework of penetration — and outside a locker room full of dicks.