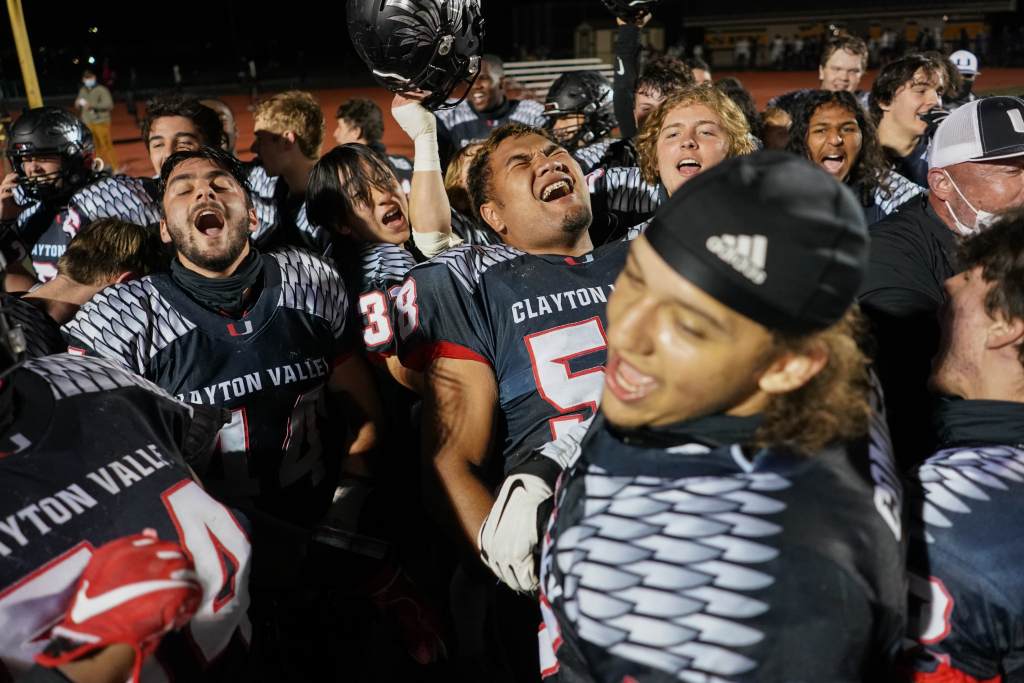 Points have been difficult to come by for Clayton Valley Charter during this unusual football season in the spring. Not once in five games have the Ugly Eagles managed to score more than three touchdowns.

But CVC has played stout defense, and once again the players on that side of the ball made short rations stand up in a 17-14 victory over San Ramon Valley on Saturday night in Danville.

The Ugly Eagles are 4-1, their only blemish being a 24-13 loss to Monterey Trail-Elk Grove. They’ve compiled that record while scoring 91 points. The defense has given up 83.

“It’s what has held us in games,” Eagles’ coach Tim Murphy said. “We’ve been good about not giving up big plays, and those guys play smart.”

The defense has been led all season by seniors Dylan “Tank” Seeley and Lukas Linkhart. “Two outstanding linebackers who are able to lead our defense,” Murphy said.

Against fifth-ranked San Ramon Valley (3-2), the No. 10 Eagles fell behind 7-0 in the first quarter when Wolves quarterback Jack Quigley couldn’t handle a shotgun snap, picked up the loose ball and raced in from nine yards.

The Clayton Valley offense woke up in the second quarter, scoring on a 17-yard run by Andrew Woolard Jr. and Steve Nelson’s extra point to make it 7-7. Then Nelson nailed a 41-yard field goal right before the half to make it 10-7 Uglies at the break.

CVC extended its lead to 17-7 in the third quarter when Woolard caught a 14-yard pass from quarterback Brendan Bush, then it had to sweat out most of the fourth quarter after Quigley went over from the 1 to make it 17-14.

The Eagles missed a field goal with under a minute that would have extended their lead to six, but the defense stood tall again, preventing San Ramon Valley from driving for what would have been a tying, and perhaps, winning score.