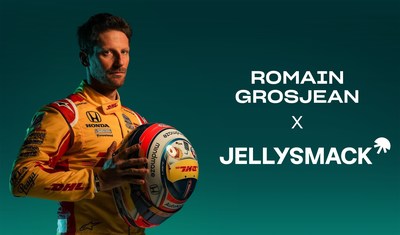 The global creator company will help Grosjean grow his social media presence to reach more fans and unlock the revenue streams of his digital content.

LOS ANGELES, March 15, 2022 /PRNewswire/ — With a decade of Formula One seasons under his belt and a highly anticipated career underway in the IndyCar Series, world-renowned driver Romain Grosjean is the latest major talent to sign with the global creator company, Jellysmack. Under the partnership, Jellysmack will use its proprietary AI technology to optimize, distribute and promote Grosjean’s video content across YouTube, Facebook, and Snapchat.

“I’m thrilled to partner with Jellysmack to bring my content to even more fans,” says Grosjean. “Not everyone has the ability to attend races in person and watching on TV just leaves them wanting more. Thanks to Jellysmack, fans will get a deeper look inside the world of racing and experience truly exhilarating content on whatever platform they enjoy most.”

“We couldn’t be more excited to be working with Romain as a Marquee partner,” says Maxime Horbez, Vice President of Sports at Jellysmack. “He was already doing well on his social channels, but as an extreme competitor, he wanted to unlock his full potential. The Jellysmack team is honored and eager to help him build content that drives the most value and grows his connection to millions of more fans around the world.”

“Romain Grosjean is a legend in the racing world. His relentless motivation, tenacious attitude, and undeniable talent translates into must-watch video content,” says Harry Levy, General Manager for EMEA at Jellysmack. “By putting Jellysmack’s unique technology and social expertise behind one of the best drivers in the world, our partnership will fuel his growth to become a frontrunner in the digital space, just as he’s done for himself on the racetrack.”

While Grosjean is most known for his impressive 180 Grand Prixes, ten podiums, and two career-best second-place finishes, many also recognize him as a valiant survivor. A horrific crash at the 2020 Bahrain Grand Prix left him trapped in his burning car for 30 seconds, nearly ending his life. Miraculously, Grosjean managed to free himself from the wreckage and survived—earning the nickname “The Phoenix.” While the crash left him with severe burns, his passion for the sport and determination to succeed wasn’t scarred. He ultimately left Formula One, but less than a year later, signed with Dale Coyne Racing in 2021 to continue his career racing in the NTT IndyCar Series. It was recently announced that he will be returning for the 2022 season with Andretti Autosport.

Jellysmack is the global creator company that powers multi-platform social media growth for video creators, media companies, brands, celebrities, and its own online communities (Beauty Studio, Oh My Goal, Gamology, House of Bounce and more). The company’s proprietary technology optimizes, distributes, and promotes video content across Facebook, Instagram, Snapchat, TikTok, and YouTube, resulting in meaningful audience growth and increased revenue in record time. Jellysmack is currently partnered with over 500 of the world’s most talented creators including MrBeast, PewDiePie, Like Nastya, Nas Daily, Karina Garcia, RezendeEvil, Patrick Starrr, and Bailey Sarian. In total, Jellysmack-managed content boasts a cross-platform reach of 125 million unique U.S. users, making it the largest U.S. digital-first company in monthly social media viewers. In addition to multi-platform syndication, Jellysmack has launched a $500M venture that offers upfront capital to license YouTube back catalogs, empowering creators to invest in whatever they need to grow their brand. To learn more, visit jellysmack.com.