NEW YORK, Jan. 4, 2023 /PRNewswire/ — Rajiv Surendra, who starred in the feature film Mean Girls, launched his own YouTube channel on New Year’s Day. The first instructional video, “Washing Whites” covers the basics of laundry and how to keep your white clothes looking their whitest. 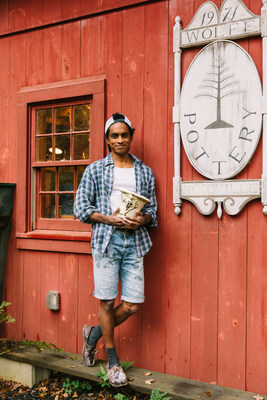 Surendra has been touted as a modern-day Martha Stewart-meets-Mr Rogers, a multihyphenate working professionally in multiple artistic disciplines. His chalk calligraphy appears in restaurants (Lure Fishbar) and cafes (Breads Bakery) all over Manhattan. He has been commissioned to hand-paint storefront signage (John Derian Company). The flowerpots he throws in Brooklyn are sold at Plant Shed. “He gives me faith that order and structure exist, and that someone, at least, is refusing to let his standards slip,” writes Constance Grady (Vox).

Since June 2021, Surendra has been collaborating with HGTV’s Handmade YouTube channel, hosting 23 videos with a combined view count of over six million (his apartment tour has over 3 million views). Surendra’s videos for HGTV’s Handmade channel are produced for the series entitled, “Life with Rajiv” and cover domestic tasks (such as how to make a bed and washing woolen sweaters by hand) and also his creative pursuits in pottery, bookbinding, paper marbling and wood carving.

“The response to these simple, quiet videos has been overwhelmingly encouraging,” Surendra said.

“People from all over the world have been reaching out and asking me to start my own YouTube channel, so I’m thrilled to finally be delivering something I’m proud of. I’m sharing my authentic lifestyle and my innate curiosity with the world through these videos,” he said.

Surendra’s channel will feature professionally shot and edited videos that cover everything from cooking a Sri Lankan dinner to how to properly iron a dress shirt, with a goal of creating high-quality instructional content that continues to inspire and educate. The channel’s page dropped a trailer in late December which has already amassed tens of thousands of views and hundreds of comments. To subscribe to Rajiv’s channel, please use this link: