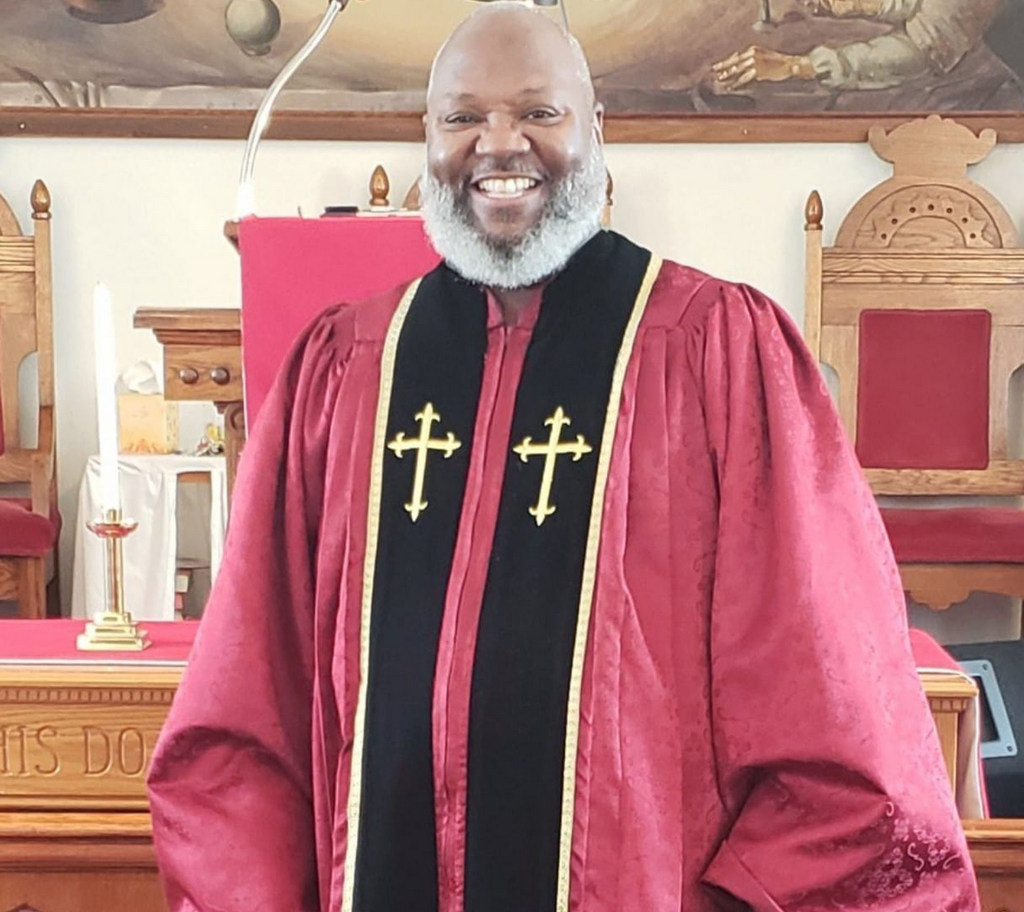 By Jannette J. Witmyer
Special to the AFRO

When the Rev. David Tyrone Gilmore entered a room, he brought along with him a sense of calm and understanding. His infectious smile, fueled by his warm and welcoming spirit, radiated joy. With his passing, his family has lost a dedicated husband, father, son, brother… And, the world has lost a remarkable human being and champion for fairness and equality.

Wise beyond his near 60 years, Rev Gilmore revealed a mature and even-handed approach to resolving issues, and a desire to help make the world a better place long before he entered the ministry. As a teen, he was an active and extremely popular youth ministry leader at Mount Hope Baptist Church; he readily gained the respect of peers and elders for his steadfast nature.

Still, on occasion, he let his mischievous side rise to the surface. Affectionately called “Tyrone” or “Ty” by those closest to him, he was known as the peace-keeper amongst his 10 siblings and many friends. His wife of 37 years, well-known blues and gospel singer Lea Gilmore, recalls with a slight chuckle, “That being said, he was [also] a world class agitator to his brothers and sisters.”

The couple met as children at New Hope and, as teens, developed a bond rooted in a shared interest in singing, music, social justice and their faith. Once married, the young family man left his job at Enoch Pratt Library and became a correctional officer at the Baltimore City Jail in order to provide for his family. He rose to the rank of lieutenant and retired with 26 years service.

Former co-worker and longtime friend, Donna Clayton, with whom he worked until her retirement in 2005, says that she and others recognized his special aura, right away. “You could always tell that David was anointed. He was never a person of ill word. He was always happy. He held no judgment and treated everyone as equals.”

“Before David became a pastor, we always called him ‘The Reverend’ and ‘Reverend Gilmore,’” she reflects, adding, “We all knew that one day he was going to become a pastor. It just wasn’t his time, yet.”

At The New Mount Zion Baptist Church, where Rev. Gilmore became pastor, Deacon Jesse Peterson says, “We at the church feel that he was anointed to be the pastor 25 years ago.”

At that time, New Mount Zion’s former pastor, the late Pastor David Harrington, placed a request for Gilmore’s assistance with his pastor at Mount Hope Baptist Church, Rev. H. Donald Bates, which was granted. The couple and their two sons, Jonathan David and Gabriel-Michael, joined New Mount Zion, March 10, 1996, and he took on teaching Bible Class; working with the church’s youth groups, committees, and the Vacation Bible School and preaching. After Rev. Harringtondied, Gilmore became pastor in July 2015.

Gilmore’s passion for making the world a better place was evident throughout his time at New Mount Zion, not just at the church but throughout its community and many others. He served as chaplain of the Harlem Park Neighborhood Council and helped to acquire a lot positioned on the north side of the church from Baltimore City.

Peterson says that Rev. Gilmore was especially proud of the church’s outreach efforts that provide meals and clothing, and has developed partnerships with other area churches and organizations. All services, except clothing, have continued, despite restrictions imposed as a result of the pandemic, as Gilmore remained focused on staying involved in the community. Peterson’s voice cracked as he said, “Everybody is in a state of shock. Our church is devastated.”

That shock reverberates with Carrie Evans, former executive director of Equality Maryland, the state’s largest gay, lesbian, bisexual, and transgender rights group. She vividly recalls Gilmore’s attendance at a prayer breakfast, kicking off a marriage equality effort, at the governor’s mansion in 2012. “David said, ‘I’m ready.’ And I knew that meant he was ready to speak out in support of marriage equality.”

Evans, an atheist who is now vice president of the city council in Minot, ND, says that hearing him speak about his God being one of love and acceptance, and his ability to support marriage equality because of his faith, affected her greatly. For Evans, he was the first leader of faith to make space for non-believers, and she attended his installation as pastor and other services at New Mount Zion. She says that he once shared a sentiment with her that she continues to hold dear, “You are as faithful as I am. Our source of faith just comes from different places.”

Rev. Gilmore’s work in ministry was not limited to sharing his faith within the United States. He also served as a missionary with Right Way Ministries International, and travelled to Kenya and Ghana in Africa and Guyana, South America, reaching out to churches, and working with populations experiencing poverty.

From the very beginning, music played a large part in the relationship that grew into the Gilmore’s 37-year marriage. When a teen-aged Lea participated in the Miss Mount Hope Pageant, David escorted her down the aisle. She played the piano and sang “God Is,” a song they frequently sang together, along with their son Jonathan, blending the richness of her contralto with the baritone and tenor of her husband and son, respectively.

On many occasions, he joined Lea or filled in at community sings, which she created to bring folks together to sing and heal Baltimore’s spirit. Originally held at The Living Well, he welcomed the events to a permanent home at New Mount Zion and played a major role in organizing “Sing for Peace,” a multi-cultural songfest, and collaborating with St. James Episcopal Church, holding annual concerts jointly with the church.

When he traveled to Brussels, accompanying Lea on a series of benefit concerts for the Damien Foundation, he took part, engaging young children in the classroom with song. One of their hosts and now a longtime friend, Flemish musician Marc Borms explains, “I remember him visiting the kindergarten groups, sitting in a circle, telling stories, and singing songs like “Kumbaya” and others. You have to know, our small kids don’t speak English, but he was able to connect with his gentleness and kind words, singing and celebrating.”

That experience led Borms to ask if he would deliver a sermon the following Sunday to his local catholic church at Ten Bos, Erembodegem, Belgium. “David preached and sang. His voice was gentle and soft, but also rose over the full-packed church, experiencing for the very first time how God’s words can have an impact on you. Many eyes were filled with tears, many had goose bumps, and even more ‘Hallelujahs’ and ‘oh yeah’… something that NEVER ever happened before in my church,” Borms exclaimed.

Rev. Gilmore used the strongest power in his possession to reach people and communities around the world, his faith. While he has left this earthly place, the impact of his life’s work lives in the hearts of many.

“Well done, thou good and faithful servant: thou hast been faithful over a few things.  I will make thee ruler over many things: enter thou into the joy of thy Lord.” (Matthews 25:21)

Funeral arrangements for Pastor David Tyrone Gilmore are as follows: