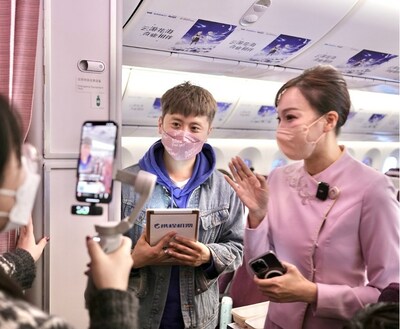 SANYA, China, Dec. 30, 2022 /PRNewswire/ — On December 28th, a flight themed on the open-world role-playing game Genshin Impact flew from Shanghai to Sanya. The flight was operated by Juneyao Air, and on the flight, there was a joint live-streaming event collaborated by the Sanya Tourism Promotion Board (STPB), Trip.com, and Genshin Impact.

This was part of a drive by STPB to draw in Generation Z (Gen Z) tourists, following its recent effort of luring young tourists by hosting a GenZ Top Model Contest. In addition to bringing live streaming to the skies, the themed flight also included strong elements of the Genshin Impact game and Sanya as part of the plane’s decor, adding a touch of vibrancy to the flight.

Genshin Impact is an action role-playing game developed and published by miHoYo. The game takes place in an anime-based open world called Teyvat, where characters can roam freely. It saw 23 million downloads on mobile platforms within a week after its debut release in 2020, and has gained a legion of fans, especially among the Gen Z demographic across the world.

For Sanya, Genshin Impact is an ideal choice to work with as the city is upgrading its tourism resources to grab more attention from young tourists and international visitors. In 2021, the STPB took a similar approach to appeal to younger travelers with a collaboration with Game for Peace (the Chinese version of PUBG Mobile). Now that inbound tourism is expected to recover, the STPB plans to launch a series of initiatives to present Sanya as an international destination to young travelers worldwide.

Boasting all-year-round warm weather, spectacular scenery, and diverse experiences, Sanya is the perfect backdrop for work, travel, and play. In recent times, the STPB has focused on cultivating new tourism opportunities and hotspots to attract different types of travelers to Sanya, especially young travelers. With surfing, camping, diving, and other trendy sports becoming increasingly popular among young people, the outdoor lifestyle is also more and more associated with Sanya, as the city continues to cater to a younger demographic.

Tourism destinations represented by Sanya have recently experienced rapid growth. According to data from Trip.com’s FlightAI platform, tourists from various destinations flocked to Sanya from December 20 to December 27, with Sanya Phoenix Airport ranking fifth in China in terms of civil aviation passenger traffic, while the year-on-year recovery rate in passenger traffic ranks the top four of all airports in China.

As China eases its restrictions for inbound tourists in 2023, the STPB will focus on highlighting new attractions in the tourist destination and preparing an exciting lineup of events to attract new international visitors, global young travelers, as well as enticing travelers who have previously visited to return.

Laboratory information management system (LIMS) market to grow by 10.89% Y-O-Y from 2022 to 2023: Adherence to compliance and government regulations will drive growth -Technavio