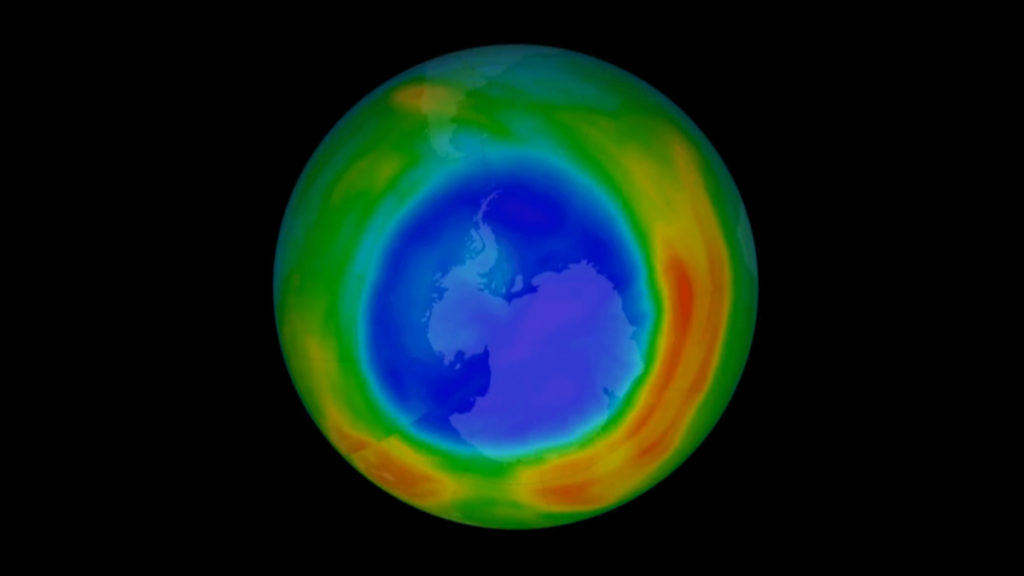 The unexpected discovery of a gaping hole in Earth’s ozone layer alarmed scientists in the 1980s, because this ozone protects our bodies from harmful solar radiation. During the 20th century, humanity had unwittingly emitted huge amounts of ozone-depleting chemicals into the atmosphere.

Yet political leaders wisely listened to scientists. In a historic 1987 environmental treaty called the Montreal Protocol, the world’s nations successfully agreed to phase out the widespread use of these problematic gases (like those used in refrigerants and aerosols such as hairspray, known as chlorofluorocarbons). President Ronald Regan said the treaty was “a product of the recognition and international consensus that ozone depletion is a global problem, both in terms of its causes and its effects,” and called it “a monumental achievement.”

The ozone high up in our atmosphere has indeed started recovering, and now scientists estimate the benefits to Americans will be extraordinary. New research published in the scientific journal ACS Earth and Space Chemistry found the Montreal Protocol (and amendments that later strengthened it) will in total prevent an estimated 443 million cases of skin cancer in Americans born between 1890 and 2100. That adds up to 2.3 million deaths. To boot, Americans will also avoid some 63 million cataract cases.

“It’s striking,” Julia Lee-Taylor, a researcher at the National Center for Atmospheric Research who coauthored the study, told Mashable.

“This shows the international community can be successful in passing regulations that do reduce environmental problems and benefit peoples’ lives,” Lee-Taylor added. “These chemicals were doing damage that came from human activities. The science told us there was a problem that we had unforeseen.”

Cumulative melanoma cases in the U.S. with and without the Montreal Protocol.
Credit: ACS EARTH SPACE CHEM.

“This study clearly shows the impact of the Montreal Protocol on limiting ozone-depleting chemicals,” said Masaoki Kawasumi, a skin cancer researcher at the University of Washington who had no role in the research. This is crucial for our public health, Kawasumi emphasized, because skin cancer is already the most prevalent cancer in the U.S., with some 5.5 million diagnoses each year.

“That exceeds all other cancers combined,” he said.

To estimate the public health benefits of the Montreal Protocol, the researchers predicted how much of these ozone-depleting chemicals would have traveled into the atmosphere had global nations not agreed to phase out their use, compared with today’s regulations. In a hypothetical world with no landmark treaty, they calculated how much ozone would then diminish in the atmosphere, and then deduced how much more skin cancer would arise (based on health data about skin cancer cases from the 1980s).

They compared these results to a world with a Montreal Protocol — and significantly more ozone — and their simulations found starkly fewer estimated skin cancer cases and deaths through 2100. “It shows a real-world benefit to life,” said Lee-Taylor.

Ozone exists high up in Earth’s atmosphere, at some 9 to 18 miles above the surface. Ozone-depleting chemicals decrease ozone all over the mid-latitudes (where the U.S. is located), and also prominently over the South Pole, which is the location of the infamous ozone hole. Down there, environmental conditions in the lofty atmosphere are especially conducive to chemical reactions that break down ozone.

The loss of ozone ultimately allows UV radiation to damage the DNA of living organisms (which can cause cancer) and harms both plants and phytoplankton.

The continued success of the Montreal Protocol has ramifications for humanity’s current efforts to limit other deeply problematic pollutants, specifically the heat-trapping greenhouse gases now warming the planet. The levels of atmospheric CO2 are the highest they’ve been in some 3 million years, back when giant camels roamed the Arctic. The impacts are stark, and accelerating: Nineteen of the hottest 20 years ever recorded on Earth have occurred since 2000, says NASA.

In October and November this year, global nations will meet at a pivotal UN climate conference (“COP26”) in an effort to agree to ambitiously cut their carbon emissions. Of course, solving the global CO2 problem is much more challenging than regulating ozone-depleting chemicals, which were phased out by governments without greatly impacting power generation, many industries, and everyday life. Fossil fuels, on the other hand, power most of the world and are integrally tied into our electrical generation, transportation, and industrial systems. (The transition away from fossil fuels, however, is certainly underway.)

But the Montreal Protocol showed that ambitious and momentous global action on difficult environment action isn’t just possible. It can succeed.

“I really think it should serve to give us confidence that we can solve environmental problems,” said Lee-Taylor.