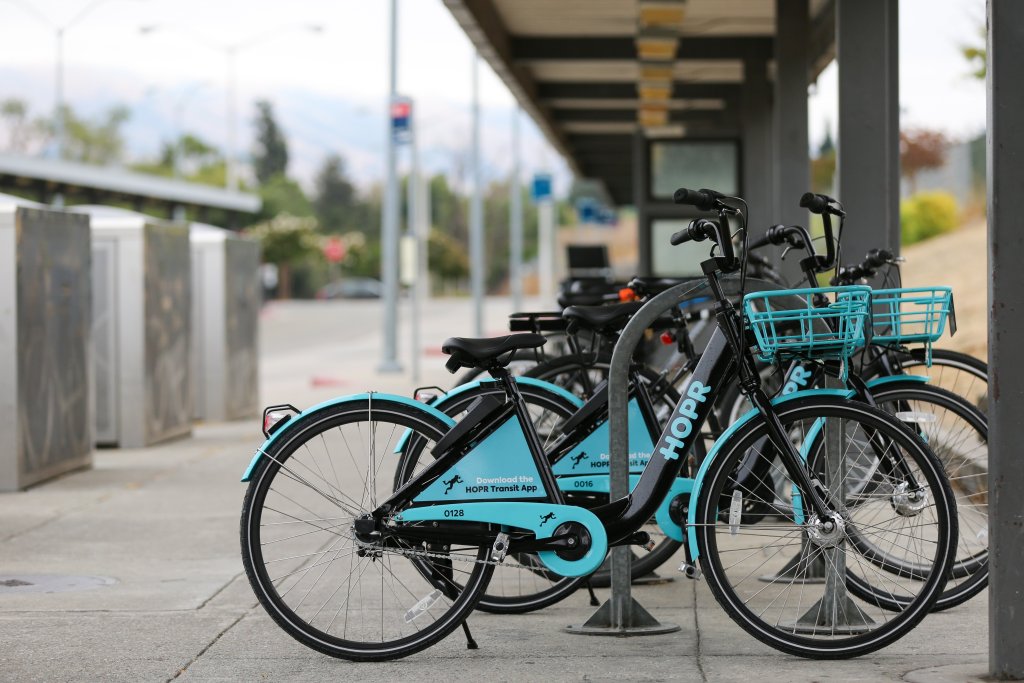 FREMONT — Scooters are coming to Fremont, for real this time. And e-bikes, too.

After some hitches in efforts to get “micromobility” options rolling in Fremont, including a ditched deal with Lime, and the coronavirus pandemic interrupting a bikeshare pilot program last year, city staff is making the pilot permanent, and expanding it to include e-bikes and e-scooters.

The aim is to offer people a viable and environmentally-friendly solution “for short trips, on-demand travel, and transit first- and last-mile access,” according to Hans Larsen, Fremont’s head of public works.

The City Council has approved a new two-year agreement with Miami-based CycleHop, which operates as the brand HOPR, which paints its bikes black with bright turquoise accents, including the brand’s frog silhouette. The city will be chipping in $250,000 remaining from a 2017 Bay Area Metropolitan Transportation Committee grant of $350,000 to help support the program.

The city will provide $200,000 to HOPR to lease equipment, and use $50,000 to cover the costs of administering the program, city staff reports said.

Because of restrictions on the grant money, the city’s contribution won’t be used for leasing e-scooters or for the program operation. City reports said HOPR “intends to fund program operation costs through membership, user fees, and private sponsorships.”

Under the new agreement, HOPR will place 50 pedal bikes, 100 e-bikes, and 100 e-scooters around the city for people to rent for short-term rides. The e-scooters will be rolled out later in the spring, and e-bikes in the summer, Larsen said.

During a pilot bikeshare program in 2019, HOPR put about 250 pedal bikes around the city, and Fremont crews used paint and plastic bollards to create some designated parking areas for the bikes, though users can choose to end their trips at any location in the city if parked according to city rules, such as not obstructing sidewalks.

Users who want to ride the bikes or scooters need to download the HOPR Transit app to sign up and unlock a bike. The app is available on Android and iOS. A map on the app and the company’s website show where the bikes are located in real-time.

The bike trips cost $1 to start and 15 cents per minute while in use. The company also offers monthly or annual passes with reduced rates.

Fremont started a one-year pilot program with HOPR in July 2019, but that pilot was interrupted by the pandemic, and operations were temporarily suspended. The city said bikeshare operations resumed in September 2020, and the pilot was extended to February 2021 “to allow for a full year of operations and evaluations.”

Larsen said in an email there “appeared to be interest from the community in using bike share,” and he noted some of the trips “were long compared to other bike share systems, which suggests that electric-assist options may perform well.”

Prior to the pandemic, the HOPR program totaled 6,834 trips including an average of 22 weekday trips and 5 weekend trips with an average trip length of 1.2 miles, Larsen said.

“Over the past year, Fremont has continued to expand its bikeway infrastructure with more separated and protected bike lanes, particularly in the central Fremont area,” Larsen said.

The pandemic is not the only snag the city has faced in trying to establish and manage a program for bikes and scooter use in the city.

In late 2018, at a time when the presence of scooters in cities around the Bay Area were causing a regulatory stir, the city council approved a one-year deal with Lime, a San Francisco-based electric scooter company, and announced that scooters, bikes and e-bikes would be rolling out around February 2019.

However, in early 2019, city staff told this news organization that Lime informed the city that “they were no longer going to provide bicycles and would strictly focus their business model on scooters.

The grant money the city was using to support the program requires bicycles be a part of any shared mobility program, so the Lime deal had to be scrapped, and the HOPR deal was put into place instead.