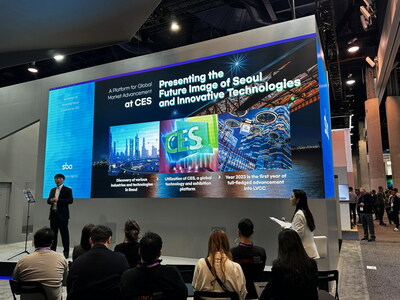 SEOUL, South Korea, Jan. 9, 2023 /PRNewswire/ — The Seoul Metropolitan Government and Seoul Business Agency (SBA) coordinated the Seoul Pavilion in one of the world’s largest technology conventions, CES 2023, hosted in Las Vegas, for four days from Thursday, January 5th to Sunday, January 8th. They presented Seoul’s vision for the future and promoted its world-class innovative technology for the global market.

Seoul Pavilion operated two exhibition halls: “Seoul Tech Pavilion,” in the CES’ main exhibition center, LVCC North Hall, and “K-Startup Pavilion” in Eureka Park, the exhibition venue for global startups. This is the first time a pavilion organized by a country (city) will be displayed at the main exhibition hall(LVCC), which is usually an exhibition space for companies leading the global tech industry, such as Samsung or Microsoft.

Under the theme of “Seoul: Smart Transportation City, Eco-friendly City,” Seoul Tech Pavilion (about 165 square meters in size) featured 3D-anamorphic illusion videos on a giant screen. The exhibition offered a variety of attractions for visitors, including innovative startups and a metaverse experience booth. In addition, they held numerous on-site events, such as open-tech pitches of participating companies, Smart City Seoul Forum, and global media interviews. 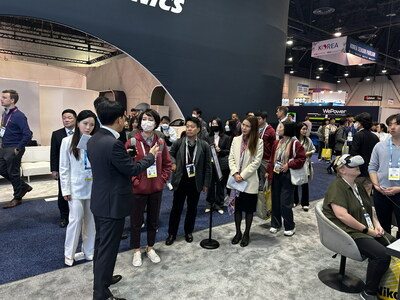 The K-Startup Pavilion in Eureka Park (about 500 square meters in size), which was put together by SBA, KISED (the Korea Institute of Startup & Entrepreneurship Development), and other Korean organizations, introduced futuristic technologies from 51 companies. The companies were made up of five industries: mobility, bio and healthcare, ESG, manufacturing, and data.

SBA held an “Vision Announcement Ceremony” to show off ‘Amazing Seoul’ at CES 2023 Seoul Tech Pavilion, on January 5th at 1 p.m. The event was attended by key officials, including Ho-Jae Song, the director of the Economy and Employment Planning Bureau of Seoul; Hyun Woo Kim, CEO of SBA; major representatives of enterprises and startups; and an overflow of CES visitors and media.

Under the theme of “Invitation to Amazing Seoul, Unveiled at CES”, Hyun Woo Kim, CEO of SBA, presented the lifestyle of “Amazing Seoul” admired by the world and showcased its digital infrastructure and innovative technology. SBA expressed its plans of continuously introducing Seoul’s diverse industries, technologies and lifestyle at global platform CES.

At the announcement ceremony, Hyunwoo Kim, the CEO of SBA, revealed the plan to hold the “The Seoul Con Festival” at DDP at the end of December.

The Seoul Con Festival will invite many influencers, famous Youtubers and Tiktokers from around the world to shed light on Seoul’s Beauty & Fashion industry while introducing the futuristic DDP to the world.

On January 6th, participants took the time to network with key global corporate officials attending CES. At 3:30 p.m., SBA and the Korea Economic Daily and GFT Ventures, a major investor in the U.S., jointly organized the “Korea – U.S Investor Startup Networking Forum” at the Renaissance Hotel near the exhibition center.

The forum was attended by more than 100 people including startups participating in CES Seoul Pavilion, global firms such as Samsung and Qualcomm, and officials from major Korean and international investors (VCs and CVCs) such as GFT Ventures and 500 Startups. During the forum, investors presented their programs and areas of interest, while the startups gave pitches to attract potential clients.

On the same day at 7 p.m., a major networking event for CES officials, “Seoul Night”, was also held. This event was co-hosted by SBA and the Korea Economic Daily and attended by more than 50 key stakeholders, including businesses associated with the Seoul Tech Pavilion and K-Startup Pavilion, major universities in Korea, the U.S. Embassy, and large corporate officials from all around the world.

At Seoul Night, SBA gave a presentation on Seoul’s plans to foster new promising industries with CES and its future technology prospects. Participants were also given opportunities to network with each other for new business collaborations. Hyunwoo Kim, CEO of SBA, announced that “SBA has been able to effectively present Seoul’s futuristic lifestyle that smart mobility and ESG technologies are creating on the global stage at CES 2023.”

CES, one of the world’s largest technology conventions, is an exhibition that provides a comprehensive view of the global consumer electronics industry in one place. It is held annually in Las Vegas in January by the Consumer Technology Association (CTA). Aving News has annually reported on CES since 2006, hosting the “Best of CES”, which selects the best innovative products and technologies, and also the “Best of Made in Korea” that chooses the most ingenious businesses in South Korea. They also have been delivering breaking news about CES through AVING LIVE.